COINCIDENCE ONE, Page 5 (GOLDILOCKS AND THE JUST-RIGHT RESONANCES) 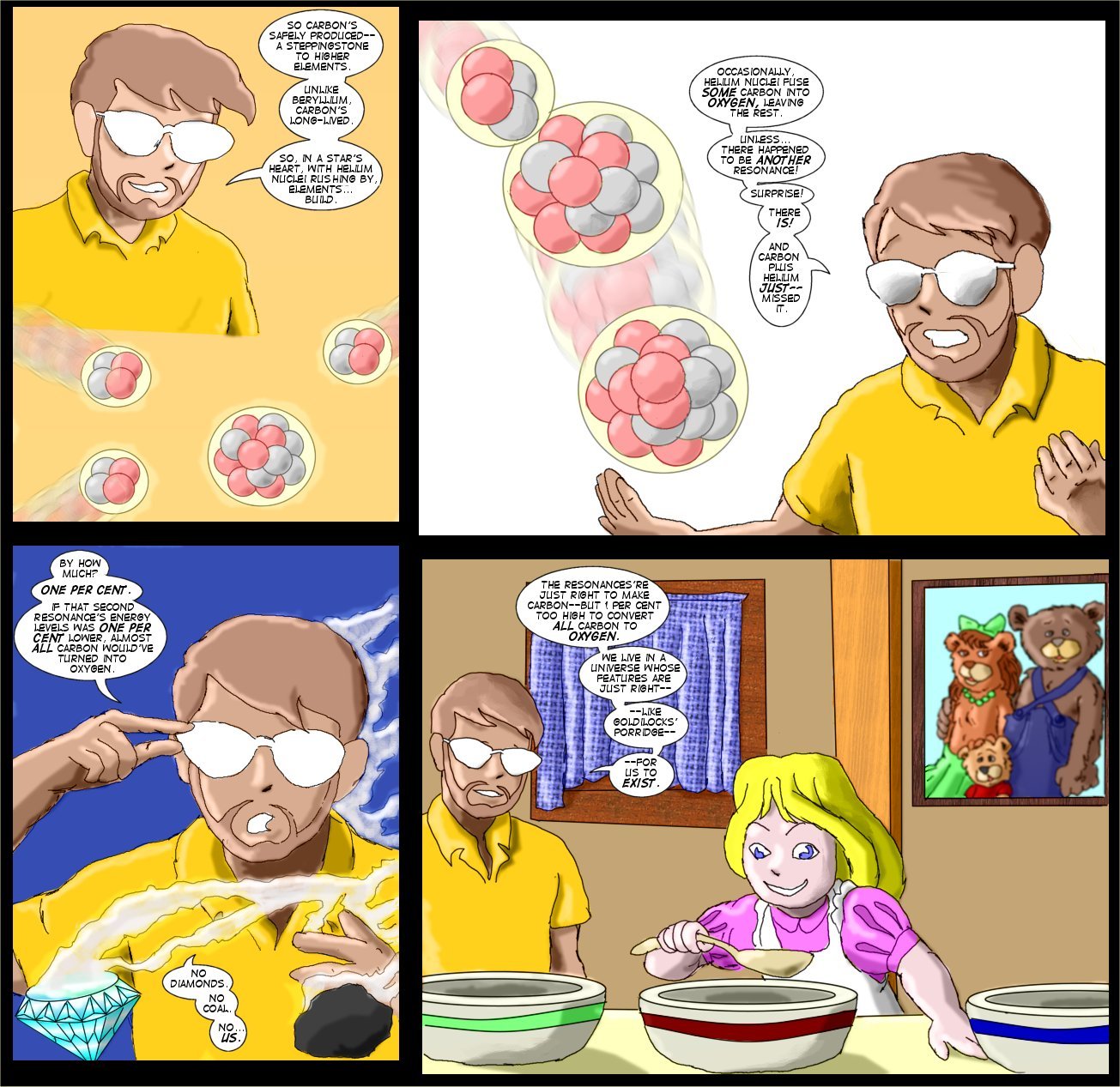 1st Dec 2013, 11:46 AM
Average Rating: 5 (1 vote)
Rate this comic
Author Notes:
alschroeder 1st Dec 2013, 11:46 AM
Some references would include John Gribbin and Sir Martin Rees' COSMIC COINCIDENCES or Barrow and Tipler's THE ANTHROPIC COSMOLOGICAL PRINCIPLE. And yes, I will get around to Mario Livio's work as well as some later studies. This is simplified a little, but essentially true...if the energy levels of a helium-carbon fusion had been one per cent higher, almost all carbon would have been converted into Oxygen-16, instead of smaller amounts of Oxygen-15 being formed by a slightly different process, leaving vast amounts of carbon left to form, among other things, us. Just as almost all the initial beryllium was, due to the other resonance, turned into carbon.

I like oxygen. I'm a big fan of oxygen. But carbon's ability to do covalent bonds with a large assortment of other elements make it unsurpassed as a medium for complex, sustained chemical reactions (i.e., life) and is the medium for the only example we truly know of---earthly life.

Still, I don't want to be a carbon chauvinist, and several other non-carbon biochemistries have been proposed. I will examine what alien races would--or would not--be eliminated if the resonances didn't fall just right...next time.

dougwarner59 1st Dec 2013, 2:14 PM
Really interesting topic you got here. To me if God wanted people to know of his/ her existence then this conversation would not be happening right now, because he/ she would have made it very clear. so, I will assume God doesn't care if we know of him/ her. It is really hard for me to see how you could possibly prove scientifically that a creator exists. it seems you may be heading in the logical direction of explaining his or her existence based on the fact that our existence is so improbable that it had to come into existence due to some even more improbable being. if you are going to use science to prove we could not have come into being without a God, you need to use that same science to explain how God came into existence.
Unless you are going to use the argument of God always being here; Then I could just as easily say that universe was always here.
edit delete reply
alschroeder 2nd Dec 2013, 1:51 AM
Excellent points; I'm going to get to them in time; but I want to build my case a little bit before I get into possible explanations. However, if you see a book called BEFORE THE BEGINNING by the cosmologist George F.R. Ellis (not the other one of the same title by Sir Martin Rees) you'll get an idea of where I am going. Let's just say some of the explanations that have come forth for coincidences like that might be even more improbable than a Creator. But of course, I don't expect ANYONE to take my word for it.

I'll get to that. But it'll take time to build such a case.