FREE MINDS AND FREE WILL 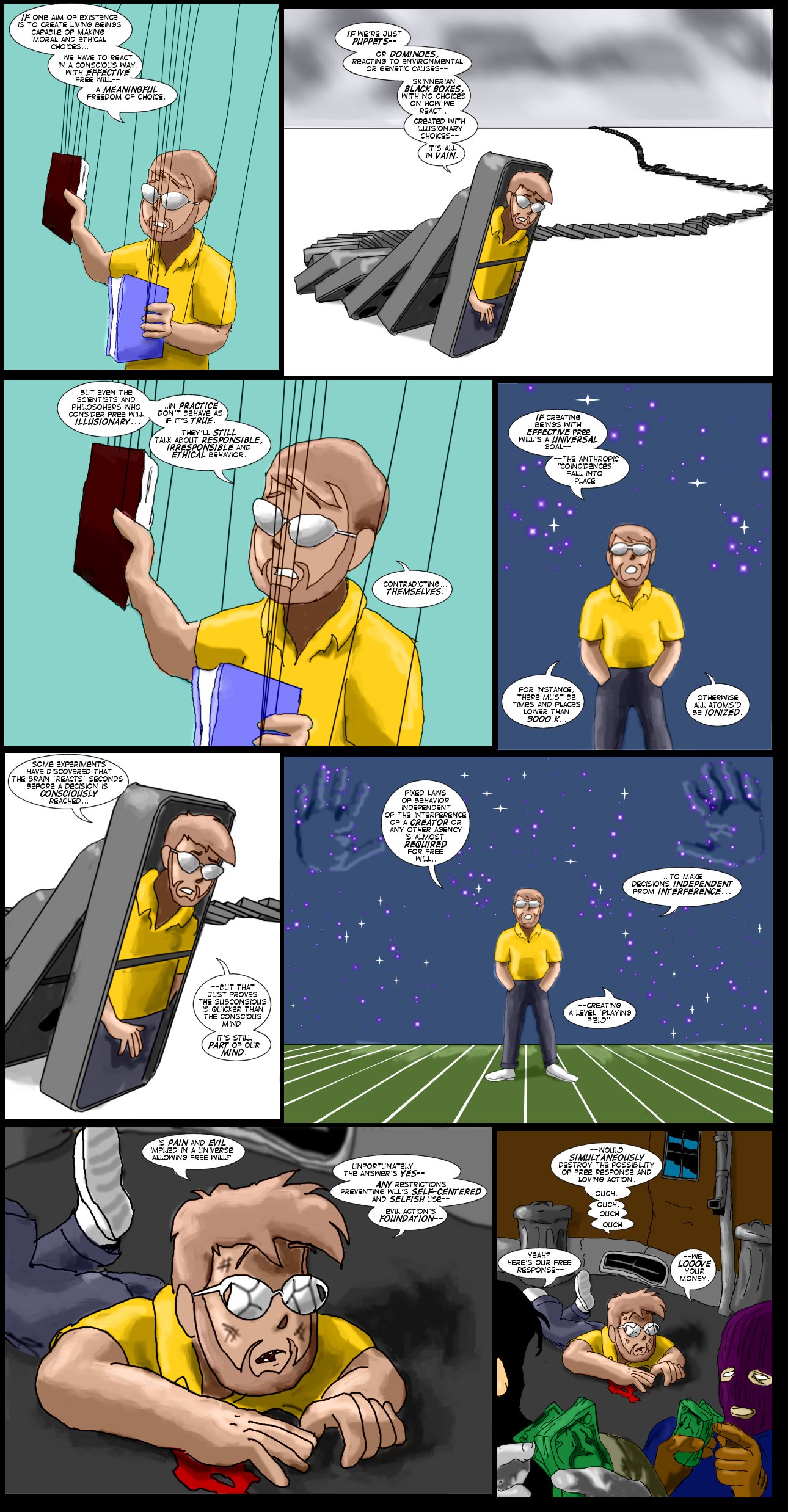 8th Feb 2015, 9:25 PM
Average Rating: 5 (1 vote)
Rate this comic
Author Notes:
alschroeder 8th Feb 2015, 9:25 PM
Continuing a look at the origin of reality...largely inspired and derived from George F.R. Ellis' brilliant brief book, BEFORE THE BEGINNING. He is NOT responsible, though, for the liberties I've taken with his logic or how I've chosen to illustrate it.

A lot of nonsense is written about free will. Some recent studies have indicated that the subconscious mind "reacts" to decisions from one to seven seconds before you consciously make it, indicating we are pawns of the subconscious. A good overview is here and Sam Harris wrote a compelling case against free will in his FREE WILL. A comment on a recent experiment in the subconscious mind reacting before a conscious decision is made, is cited by Jerry Coyne here, while others, to say, the least, are not convinced--as in here and here.

This all seems remarkably irrelevant to me. It should surprise no one who is at all familiar with the subconscious that it is quicker to realize some things than the conscious mind. The subconscious is still PART OF YOUR MIND. That doesn't prove the subconscious is just an aggregation of your genetic and enviornmental causes, and nothing else, reacting only to stimuli without any real choice. Nor does it prove that its anticipation of your decision precisely dictates that decision--or is just lighting up areas of your brain that would be used if you happen to decide in a way your subconscious determines might be most likely.

No, I have no idea how the mind makes conscious decisions. Neither does anyone else. But I---and everyone else--experiences it daily. Freedom of will is a state only experienced in the mind, similar and peraps tied in with consciousness. In fact, would we accept finding consciousness in an artificial intelligence, when we finally do, if it couldn't make its own decisions...of its own free will?

If there's no free will, ALL notion of justice and correction of wrong action is futile. So is art. So is practically any cultural activity, because at heart, there is no "you" there--just an aggregration of responses to genetic and environmental stimuli.

It's an odd era, which can grant unpredictability to a photon but feels a mind is predetermined.

One final argument: a lot of studies of identical twins raised by different parents have yielded a lot of insight into how genetics plays into one's upbringing. But by that same token, wouldn't we expect identical twins raised in the same home by the same parents to be near-identical in personality? Yet I have never met a pair of identical twins, even young ones, that I can't tell apart in personality in a few minutes. Granted they would have SOME experiential differences, but in my experience, twins react to each other and try NOT to act too much like the other...something hard to explain if they are just aggregations of environmental and genetic factors.

On the religious argument, if a Creator pretermines our essential beings--if no decision is ours---than creating us seems remarkably futile. I have no problem with foreknowledge of same--observing is not causation (observing something happening doesn't mean you made it happen) but if we are just following a plan written at the beginning of the universe, it would negate the whole point of making intelligent beings to make moral and ethical choices.


Next time: THE PROVIDENT RELITY AND THE EQUALITY OF RAIN