(A) PURPOSE FOR THE UNIVERSE 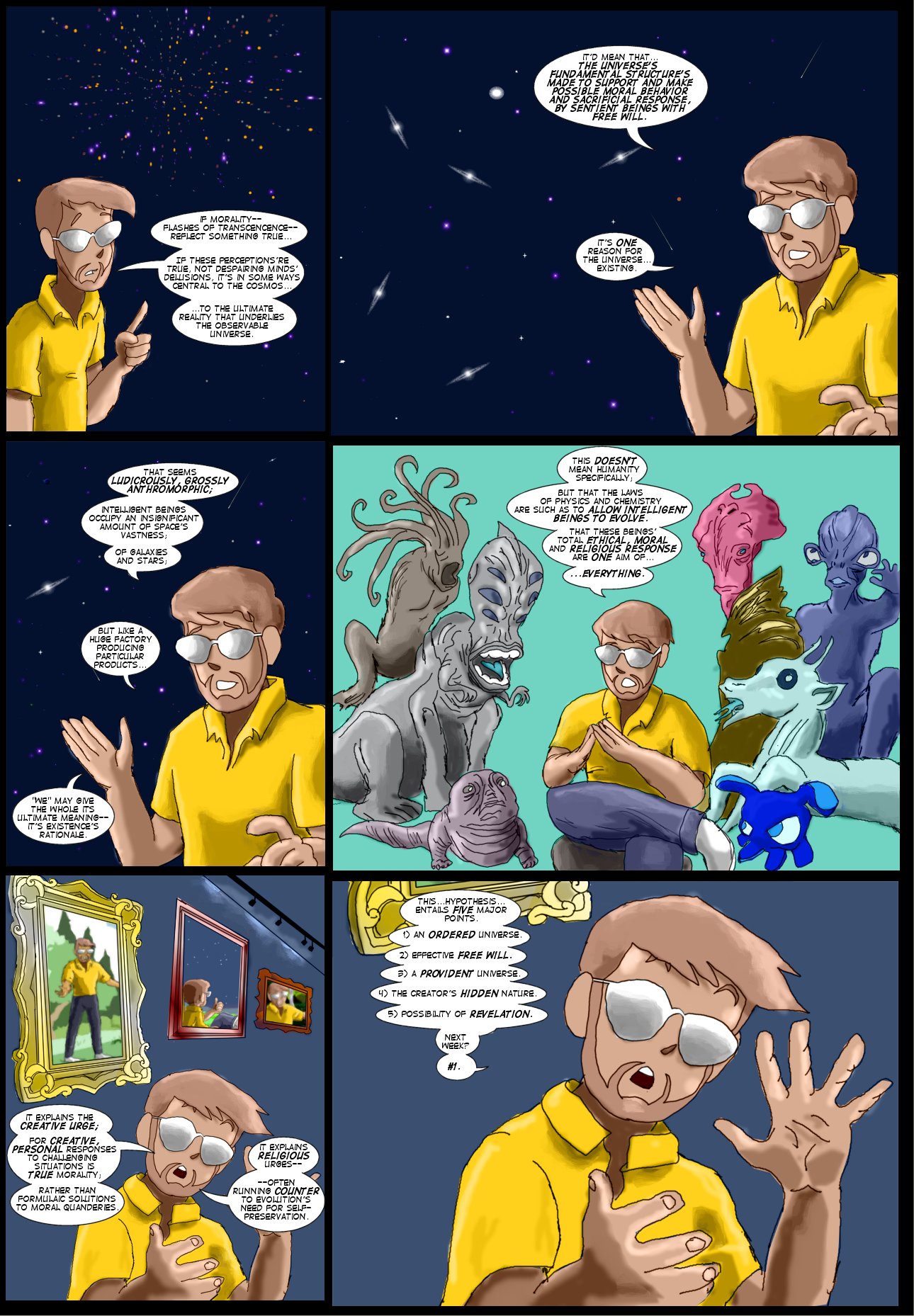 18th Jan 2015, 4:17 PM
Average Rating: 5 (1 vote)
Rate this comic
Author Notes:
alschroeder 18th Jan 2015, 4:17 PM
Continuing a look at the origin of reality...largely inspired and derived from George F.R. Ellis' brilliant brief book, BEFORE THE BEGINNING. He is NOT responsible, though, for the liberties I've taken with his logic or how I've chosen to illustrate it.<p>
A purpose of the universe. Please note I don't claim it's the ONLY purpose of the universe. My claim is arrogant enough without that.

...or it reflects something true.

Similarly, the flashes of transcendence experienced by people over the ages--often remarkably similiar--are a low-level schizophrenia that is much more widespread than regular schizophrenia--

--or its something outside our frame of reference, trying to break through.

When you add in the antropic coincidences, the many fine-tunings needed for intelligent life to evolve---it's certainly a hypothesis worth exploring.

A word about religious urges running counter to evolution's need for self-preservation--religous martyrs have often sacrificed their lives for their beliefs. Even religious terrorists, like the recent events in France, or the 911 terrorists, prove that. Some might argue such exploits are more political than religious, but one cannot say the same for many other martyrs, such as the early Christians oppressed and killed by the Roman Empire, who had no separate political agenda (or entity) to cling to, or those of the Buddhist faith who submitted to tyranny's executions rather than give up their peaceful beliefs.

Yes, aliens' moralities might be very different in some ways form our own--carnivores and herbivores might have a totally different viewpoint. But still, xenocide and the wanton slaughter of intelligent beings would probably be against the intent of a Creator who labored to allow intelligent beings to evolve. Science fiction stories like Poul Anderon's "The Problem of Pain" hint at the subtleties involved, as does C.S. Lewis' "Space Trilogy".

After I get through with these five points, I will probably wrap this up. (And you thought this would go on forever? Fat chance.)