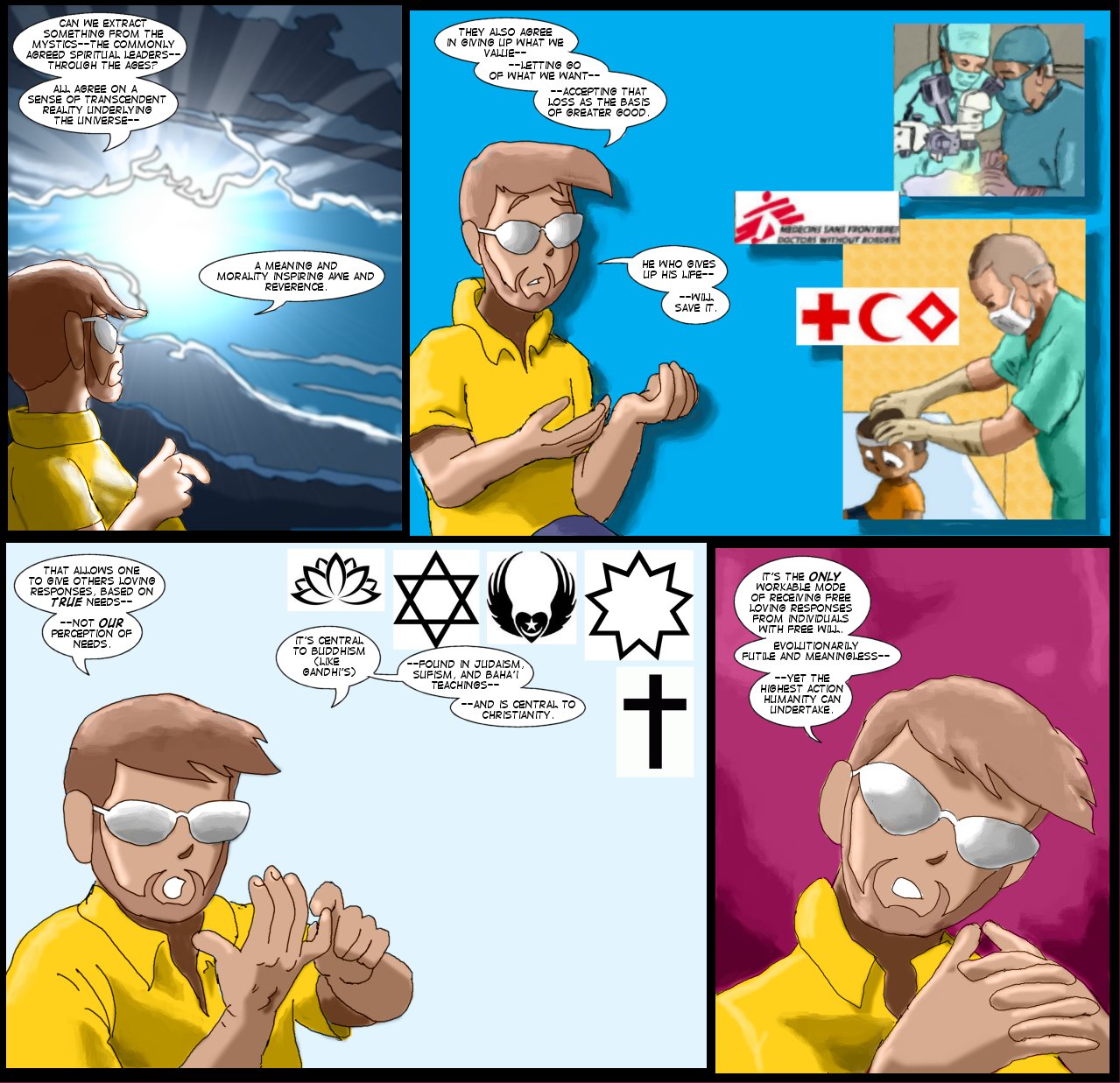 11th Jan 2015, 4:43 PM
Average Rating: 5 (1 vote)
Rate this comic
Author Notes:
alschroeder 11th Jan 2015, 4:43 PM
Continuing a look at the origin of reality...largely inspired and derived from George F.R. Ellis' brilliant brief book, BEFORE THE BEGINNING. He is NOT responsible, though, for the liberties I've taken with his logic or how I've chosen to illustrate it.

I almost decided not to run a strip this week, or a memorium strip for the martyrs to a free press, due to the death of the cartoonists in France. Remember my first strip? How it's not a good decade to be a believer in religion? The second decade of the 21st century seems to be shaping up as more of the same.

Still--actions by some associated with this tragedy, this wanton murder--actually gave me hope. (More on this later.)

The vast proponderance of spritual writings agree on a transcendent reality being sensed, and not an inhuman, non-Euclidean nightmare, either, a la H.P. Lovecraft. Almost all describe a reality beyond ours that is awe-inspiring and welcoming.

And the vast proponderance of spiritual writings seem to agree on the nature of kenotic behavior--of giving up one's own life, one's own comfort--and reaping far greater good from doing so.

The actions of the Muslim policemen who was gunned down this week defending the cartoonists is one example. The Muslim employee in the kosher (!) store who hid several customers in the freezer rather then expose them to the armed terrorists is another.

You don't have to explain why such actions--deadly for one, extremely risky for another--are "right". They are SELF-EVIDENTLY right--obviously and overtly worthwhile in their own right, and no further evidence and justification of their value is needed.

It's almost---axiomatic. Built in to the universe. Yet in full defiance for the evolutionary drive, the millenia of struggle that has brought us where we are, not easily explained by even the sloppiest of socioevolutionary thinking.

If we take this seriously---and how can we not, and deny all values we were brought up in?--it leads us to--our next strip.

Next time: A MEANING OF THE UNIVERSE (Hey, would I lie to you?)