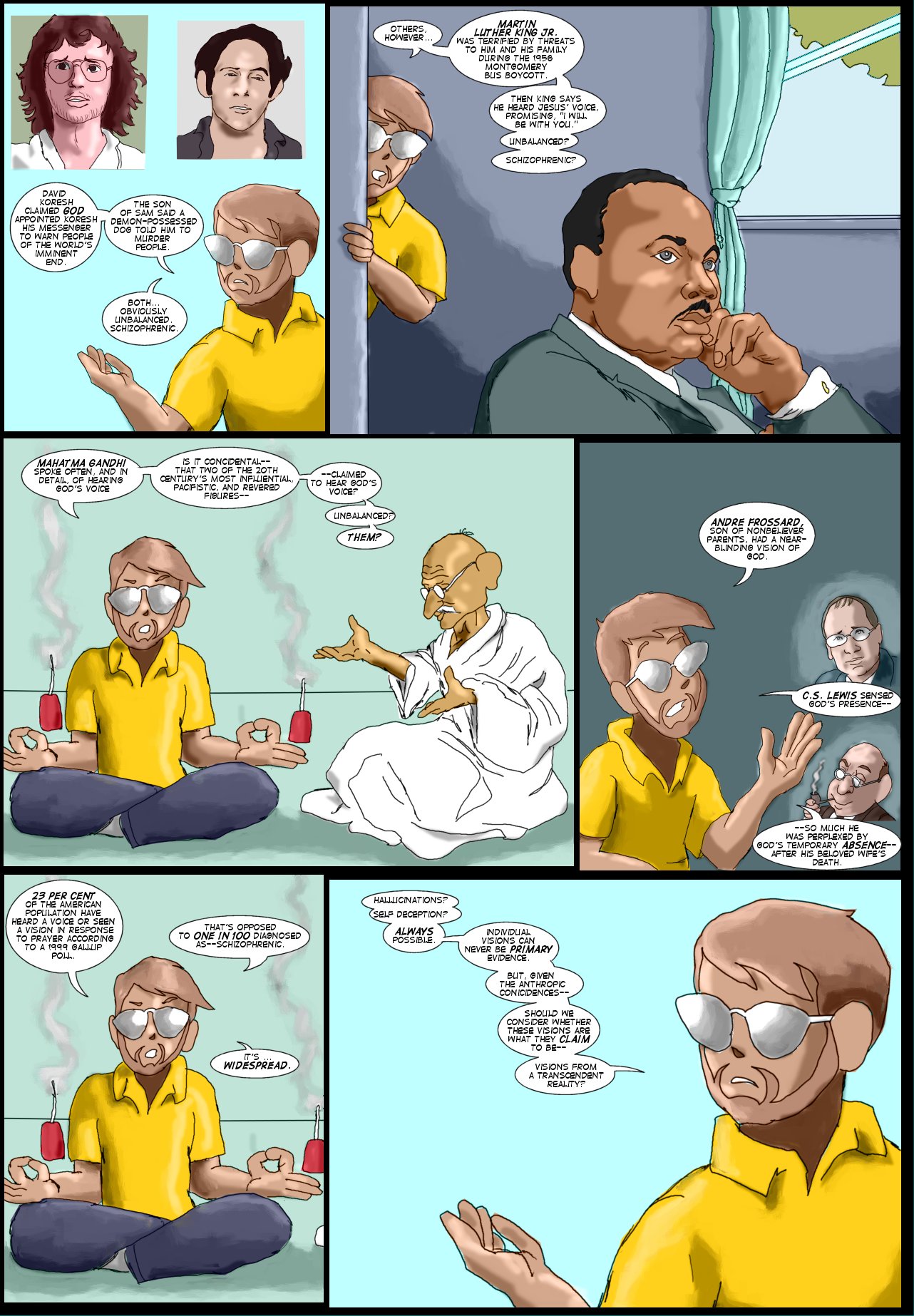 4th Jan 2015, 3:22 PM
Average Rating: 5 (1 vote)
Rate this comic
Author Notes:
alschroeder 4th Jan 2015, 3:22 PM
Continuing a look at the origin of reality...largely inspired and derived from George F.R. Ellis' brilliant brief book, BEFORE THE BEGINNING. He is NOT responsible, though, for the liberties I've taken with his logic or how I've chosen to illustrate it.

Some people who hear voices or see visions are definitely unbalanced. Many are afflicted with schizophrenia, a condition which many wrongly feel is a stigma but which can be controlled with lithium and other treatments. Usually, in such cases, the voices they hear are constant, persistent and hard to shut out. That may be the explanation of some who claim to have had a religious experience-- Joan of Arc? St. Anthony? Perhaps even Paul? It's hard to say, it's hard to diagnose someone across centuries. Our own biases might play into our dismissing them as schizophrenic (for instance, Paul was a grown man trusted by the Sanhedrin with no mention of visions before what happend on the road to Damascus. That woud be unusual for a schizophrenic.) But persistent, often abusive voices from nowhere, impossible to shut out--are not the typical experience of those who have been spiritually influential. Described as a "still, small voice" by many. Still, over the centuries, it's hard to evaluate...

So it's easier to examine examples within the last 100 years, where we have much more footage and interviews to judge the sanity of the individual.

Martin Luther King Jr's admission of hearing a voice he took for the voice of Jesus is well-documented. King's life was equally well documented, and there are no symptoms of mental illness in anything else he did.

Mahatma Gandhi often talked of hearing the voice of God, and there are some references here to his statements on same.

Andre Frossard in 1935 experienced a near-blinding vision of God in a church he was visiting in 1935, and wrote extensively about it in GOD EXISTS, I MET HIM, which you can read online here or you can read a shorter account of his basic experience here. C.S. Lewis is of course a Christian apologist without peer, but his description of his conversion in SURPRISED BY JOY remains---elusive--about what actually happened. More telling is his A GRIEF OBSERVED, where he felt, for a time, abandoned by God at a time when he most craved His presence, after the death of his beloved wife. No one reading that can doubt at one time he definitely felt God's presence--otherwise he would not have felt so puzzled, so betrayed, by the absence of that presence in his darkest hour.

Neither seemed particularly unbalanced, nor did they show any signs of schizophrenia. If you say that hearing "the voice of God" or the presence of God makes one insane---then you have to class as insane Martin Luther King Jr., Mahatma Gandhi, Andre Frossard, and C.S. Lewis. If Gandhi and King are insane--well, I think you'd have to expand the definition of insanity. Given that Gallup poll, you'd have to say there is a low-level schizophrenia hitherto undetected affecting a sizable minority of the population. Or...you might consider there MIGHT be something else going on.

Reading those more contemporary accounts, makes older accounts, like St. Augustine's CITY OF GOD, the voice that told Augustine to "pick up the book" less something you can excuse by the ancient milleu Augustine grew up in. Or Elijah's "small, still voice" which he credited to God.

If--as the anthropic coincidences might suggest--the universe was created by an Intelligence, should it surprise us that selfsame Intelligence might try to communicate with us? Communication is one of the things we look for from Intelligence..

Next time we'll look and see if we see any commonalities in the vast majority of those messages which MIGHT--only might--be from a transcendent reality, and then we'll begin to tie it back to the anthorpic coincidences.

User comments:
Frith Ra (Guest) 4th Jan 2015, 6:23 PM
I consider the results of having heard a voice more important than the hearing of said voice. We all, in some form or another, hear voices on occasion. But if that auditory experience guides us to do good for so many, or harm to any then we must question whose voice we are actually hearing.
God, as per my understanding wishes to guide us, to help us grow spiritually. Causing injury to another is antithetical to spiritual growth, using that experience as a way to justify one's greed or lust is also, again per my understanding, the opposite of spiritual growth.

But, someone says, what of when God causes events which hurt people? This is the issue which most Atheists present as proof of the non-existence of God & I'm looking forward to your discussion on that topic.
edit delete reply
Miyto (Guest) 4th Jan 2015, 8:16 PM
As a chronic schizophrenic from birth (excepting one year in elementary school where I turned it off and triggered worse psychosis for doing so, it took years to undo that damage) I would like to see that gallup study,
Do you have a link or even a name for said study?

As for stability, schizophrenia isn't that rehabilitating as long as you do regular self-maintenance. I'll post the link to the study in a few minutes, but 'sane' people are more likely to go on a massacre spree than schizophrenics. (After said massacring the murders are however quite likely to gain schizophrenic hallucinations as part of the ptsd if memory serves for why such individuals get to plea insanity)
edit delete reply
Miyto (Guest) 4th Jan 2015, 8:32 PM
On the third page (111) of the following linked pdf is the poll I mentioned in my last post.
http://scholarlycommons.law.northwestern.edu/cgi/viewcontent.cgi?article=4689&context=jclc
Sane people and people whom became insane after murder take up 3/4's of the polls contents.
Sane people scare me more than those whom admit and manage their underlying crazy.
edit delete reply
alschroeder 11th Jan 2015, 5:15 PM
I don't have a link to that Gallup study handy, I got it from this CNN article, written by a writer and therapist who conducted similar studies, at IF YOU HEAR GOD SPEAK AUDIBLY.... My apologies, I did NOT mean to even remotely imply that all schizophrenics are dangerous and/or unbalanced. (I tried to separate the two into two separate statements, but space considerations in the comic medium sometimes can bring unfortunate and unintended cross-connections.) The most interesting book I ever read on the experience of schizophrenia is Kurt Vonnegut's son, Mark?--relying on memory here--Vonnegut's EDEN EXPRESS. He stressed how much the lithium treatment had helped him, and that was decades ago. Though Koresh and Son of Sam were both schizoid and dangerous, they are by far the exception, not the rule.
edit delete reply

man in black 6th Jan 2015, 3:20 AM
Depends upon your point of view
edit delete reply
Post a Comment