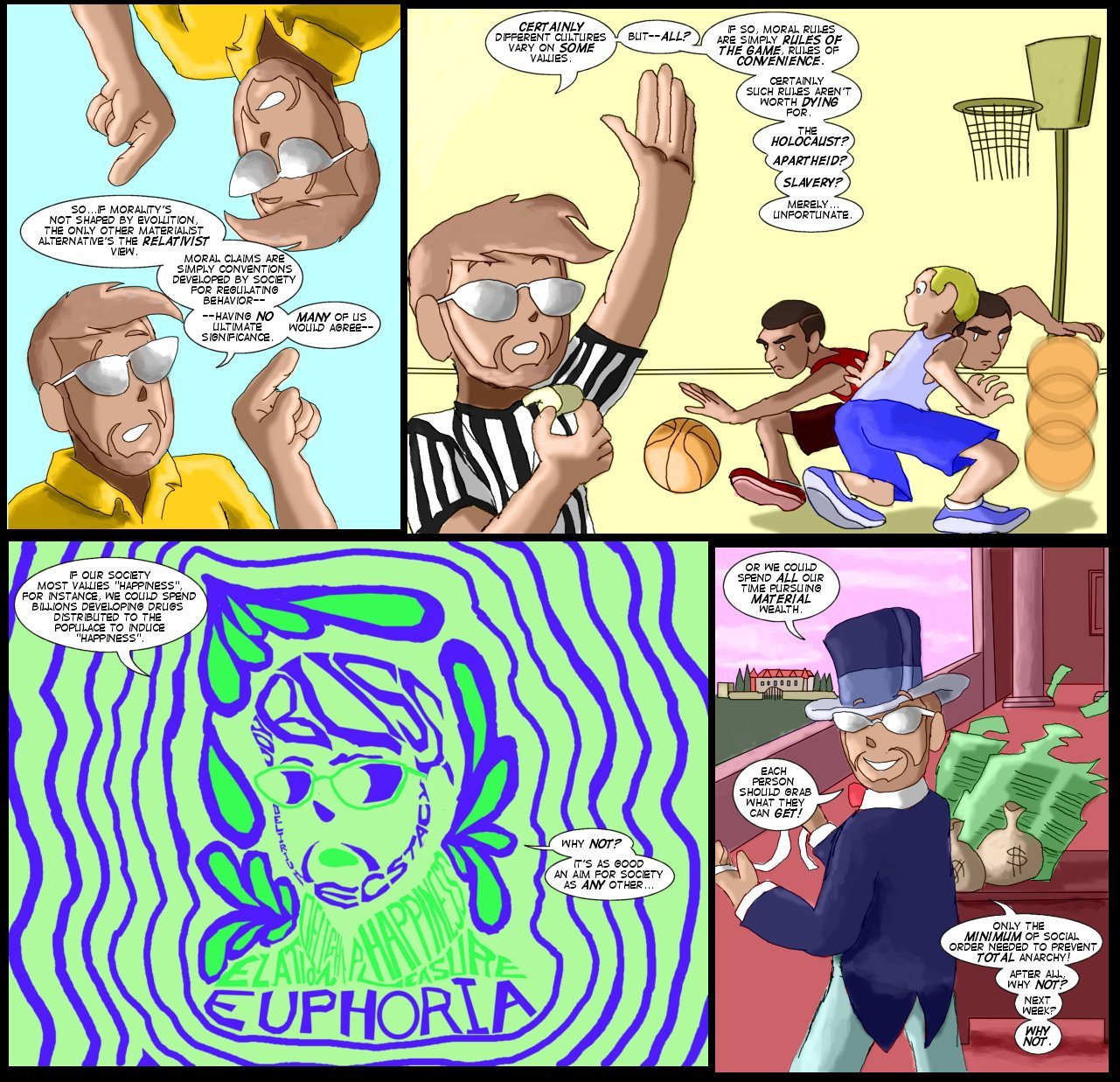 23rd Nov 2014, 4:38 PM
Average Rating: 5 (2 votes)
Rate this comic
Author Notes:
alschroeder 23rd Nov 2014, 4:38 PM
Continuing a look at the origin of reality...largely inspired and derived from George F.R. Ellis' brilliant brief book, BEFORE THE BEGINNING. He is NOT responsible, though, for the liberties I've taken with his logic or how I've chosen to illustrate it.

Many of us rightly try to avoid narrowness in outlook and make allowances for the values and different perspectives of different cultures, as we should. The Vikings believed dying in battle was the surest way to Valhalla, a viewpoint that would horrify Buddhist monks who feel nonviolence is the surest way to Nirvana. But to say any society's values are totally relative and self-determined carries some strange implications.

I had a philosophy/sociology teacher in college who said that social scientists try to adopt the latest scientific paradigm, often with bad results. Soon after the theory of evolution was introduced, some thinkers misapplied such thinking to social situations, creating the horror known as "Social Darwinism". In the 20th and 21st, the theory of relativity in physics resulted in social scientists often feeling all values are relativie---without following that idea to its logical conclusion.

This isn't a theist/atheist distinction. Again, some of the most moral people I know are nontheists. But I venture to say I could mention any number of sitautions or practices, once believed passionately by the cultures they lived in, which you would recoil from, no matter who you are.

No matter how much lip service you might give to "social relativism" there are some things you don't think are relative, but intrinsically wrong.

User comments:
jamoecw 23rd Nov 2014, 6:22 PM
billions are spent on developing drugs that do make us happy (we call it quality of life), and plenty of people spend their entire time pursuing material wealth. the holocaust was definitely people dying for convenience (just not their own, nor by choice).

generally people have certain tendencies, and they will pick a belief system that allows them to follow their tendencies. as people are complex beings, what they decide on is not a simple matter most of the time.

take for instance kamikaze pilots during WW2. the majority of volunteers were middle class university educated kids (which the government rejected). by telling their whole life that they are special and destined for greatness, then treating them like cattle by having them learn in large groups without being able to find what does in fact make them special, they end up with a hole in their life. the national cause was taught in universities by those they were supposed to respect, and promised that those that flew the planes would be doing something special, and above that rare. disconnected from the cost of the national regime, while being told they are to be special without showing them how they themselves can find that specialness within themselves, sacrificing themselves for the betterment of their society seems quite attractive as it fulfills everything they are taught, both directly and indirectly. the same phenomenon occurs with modern day terrorists.

i don't feel social darwinism at its core is wrong, nor do i feel that social relativism is wrong, however they are simply part of the larger picture. the socially strong do seek out others like themselves, and due to social relativism they aren't 'right' or correct, and those that are weak are not wrong. thus if values didn't shift then the weak would get weaker and the strong stronger, but values do shift. this is due to social evolution, possibly genetic influences, and changes in the physical world. therefore the socially strong are that way due to luck as much as anything else, and the same for the weak. if one doesn't take into account for the weak (like most social darwinists) then the contributions of the socially weak won't benefit you as much (they are less willing to help you), and you will grow weaker. just as a diverse gene pool is needed, so is a diverse array of social beliefs within a society. everyone is different, therefore having a social belief tailor made for each person to help them achieve the best they can be is the ideal for a strong society. trying to purify the social gene pool will lead to a weaker society. the hard part in such a society is for people to believe things that will help them, instead of acting like a crutch. since everyone is different one's person's crutch is another's strengthener.
edit delete reply