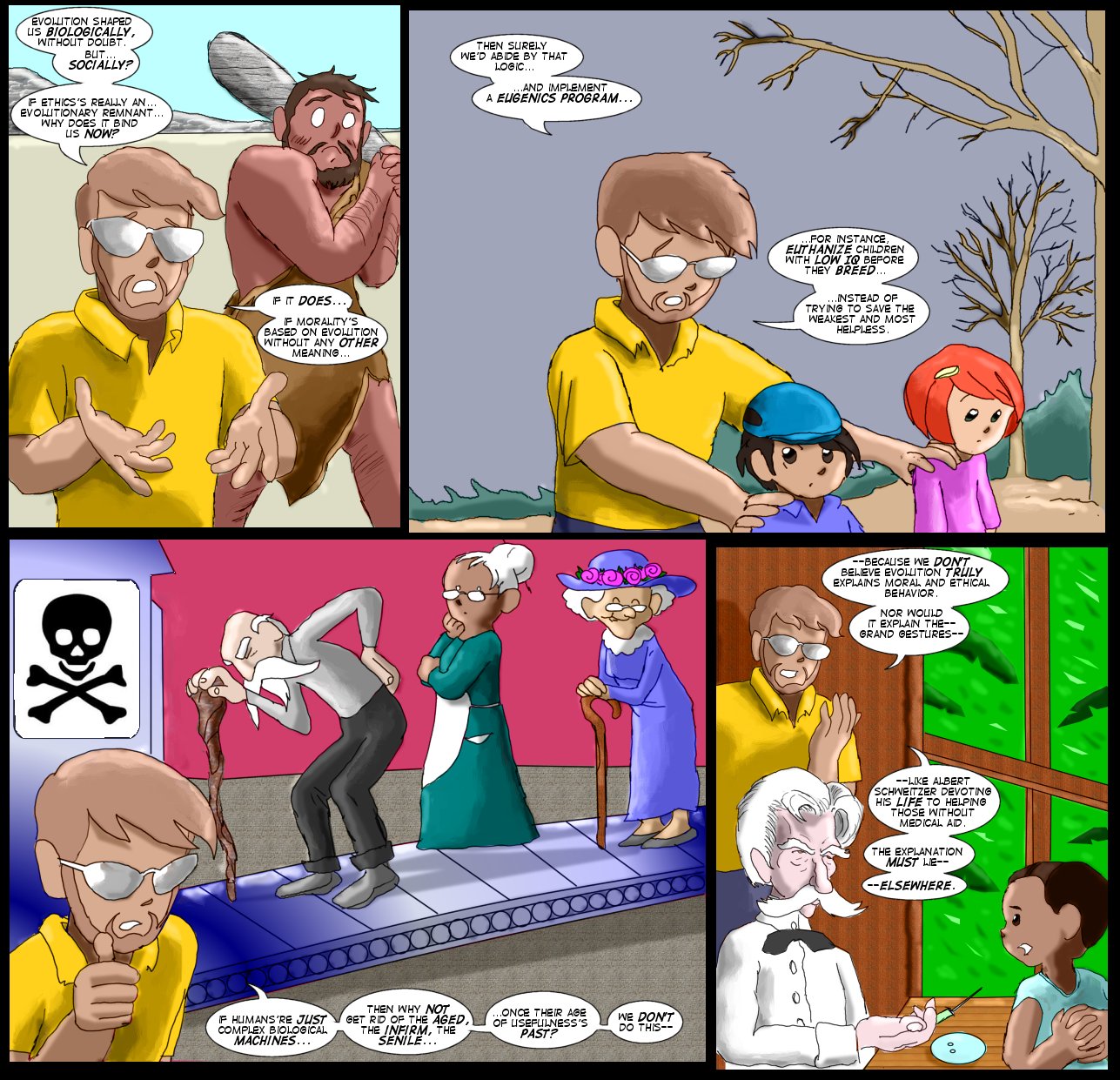 16th Nov 2014, 4:05 PM
Average Rating: 5 (3 votes)
Rate this comic
Author Notes:
alschroeder 16th Nov 2014, 4:05 PM
Continuing a look at the origin of reality...largely inspired and derived from George F.R. Ellis' brilliant brief book, BEFORE THE BEGINNING. He is NOT responsible, though, for the liberties I've taken with his logic or how I've chosen to illustrate it.

This is NOT to deny that evolutionary psychology (i.e. sociobiology) doesn't have some important truths to tell us, both in the animal kingdom and to the human experience. But deep down, even we don't believe it, in our heart of hearts. It's not a theist/nontheist thing. Some of the most moral people I know of are nontheists, like the late Isaac Asimov or the living Harlan Ellison. Indeed, many nontheists are outraged by what they perceive of a fictional God acting nonmorally---without realizing the very standards they hold God and others is mysterious in origin, a thing so close to us that we don't see how unexplainable it is.

I hope I don't need to point out that I do NOT advocate a euthenasia program, either for low-IQ children or the senile. I'm just pointing out that the evolutionary imperative to eliminate the unfit is strangely absent in most cultures' sociology, despite its evolutionary logic.

Those who devote their lives to helping others--without even kin-selection benefit---like Schweitzer, or Annie Sullivan spending her life bringing one individual, Helen Keller, to true intellectual flowering-- are almost universally admired, despite any personal failings they might have.

man in black 16th Nov 2014, 10:48 PM
Great page
edit delete reply
jamoecw 19th Nov 2014, 2:02 AM
eugenics and the belief that a society should discard its elderly has advocates in scientifically advanced nations. the ideologies behind such decisions have sparked scifi stories for quite some time. while it is quite horrid for more conservative views, and those ideologies that hold human life dear, it does exist quite prevalent in modern societies.

the idea of sacrifice for the future is the groundwork for both dedicating one's life to altruistic work, and for the ideas of eugenics and discarding the elderly. those ideas all stem from the desire to provide a better future for your kin (society as a whole) and thus could be chalked up to a biological imperative due to the evolution of the brain.
edit delete reply
alschroeder 23rd Nov 2014, 4:46 PM
Jamoecw: yeah, but if it were instinctive--if our morality was only shaped by our evolution---it wouldn't even be a discussion. IT WOULD BE A DONE DEAL. There would be nothing to contradict it.

Dax: And those who care for the elderly, (not related to the elderly) when they could easily be making more while working less in other fields?
edit delete reply
Dax (Guest) 22nd Nov 2014, 4:13 AM
I think you are neglecting to consider that quite often complex behavior stems from very simple rules, and simple rules are easier to randomly occur. which is a simpler rule, care and protect the weak or care and protect the weak proportonal to their genetic relationship. Even a generic "care fore the weak" significantly increases the odds of your own offspring since they are the ones you are most likely to be around. Sometimes the rules don't even make sense by themselves. For instance, a genetic predisposition to men with green beards doesn't seem to have any evolutionary benefit, but if men with green beards also have a genetic resistance to a common illness, the greenbeard gene is reinforced evolutionarily.
edit delete reply

dougwarner59 23rd Nov 2014, 5:50 PM
Wow this is a really good post. I may re-subscribe.
I just read Dax’s post and I was about to say something very similar to what he says and how evolution would be a cause of it. And, even if I didn’t care about these people I would not require elicits or morality to know it would not be in my best interest to dispose of these people, because one day I may become one of them. Ethical and moral behavior is just words describing the most logical ways of doing thing from a socially developed species perspective. If we were not so sociable, ethics and morality would be meaningless.
If you really want to get down to it, emotions is what can’t be explained.