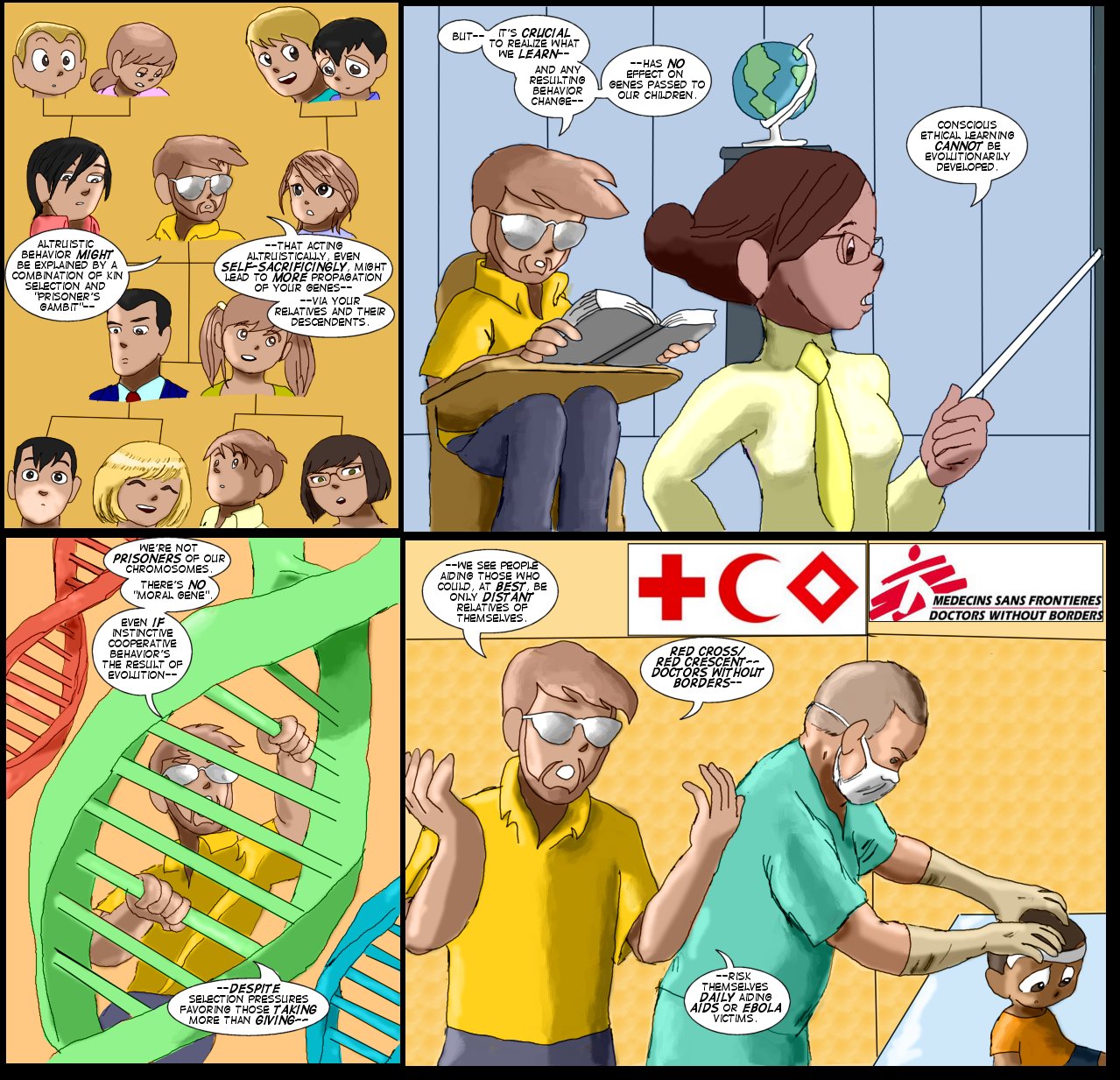 10th Nov 2014, 2:34 AM
Average Rating: 5 (2 votes)
Rate this comic
Author Notes:
alschroeder 10th Nov 2014, 2:34 AM
Continuing a look at the origin of reality...largely inspired and derived from George F.R. Ellis' brilliant brief book, BEFORE THE BEGINNING. He is NOT responsible, though, for the liberties I've taken with his logic or how I've chosen to illustrate it.

Sorry about the lateness of the posting of this. Busy week.

I'm a strong believer in evolution, and certainly there are many truths in evolutionary psychology. Still, many laypeople are turning evolutionary psychology into something much broader than originally intended. (Most real evolutionary psychologists are aware of the limitations of their field of study, and several recent statements by such are careful to differentiate between biological altruism and true altruism.) Evolution is prone to many misapplications of its theory and used to justify things that would horrify Darwin himself--from Social Darwinism to SOME (not all, by any means) excesses of sociobiology.

We don't inherit antisocial or social behavior. We are given some basic tendencies, some aptitudes, but Al Capone's son became a sheriff. There are literally thousands of others examples.

To reduce altruism--and by extension, moral behavior--to an evolutionary cause-and-effect is an unjustified oversimplification, especially for conscious, thinking beings who defy instincts all the time. It certainly explains some instinctive altruism in animals but even there it doesn't tell the whole story. There are many displays of cross-species altruism that cannot be explained by kin selection. (And if you say evolutionary altruism isn't sharp enough to differentiate altruism to propagate the gene pool from those outside the gene pool--you bring up another problem with this theory. It's impossible to disprove. If it agrees with the theory, it's caused by kin selection. If it disagrees, it's because evolution is too "clumsy" to distinguish. It's heads you win, tails you lose--unprovable in a Popperian sense.

Kin selection and the advantages given by "Prisoner's Gambit" scenarios might explain some tendencies--but they fall far short of a full explanation.

man in black 11th Nov 2014, 1:49 AM
Great page
edit delete reply
Guest (Guest) 14th Nov 2014, 9:42 PM
actually people tend to learn things differently, and thus this might be due to certain genes. if it is then feeling good for helping others could be a genetic trait that has helped a tribe prosper over other tribes that didn't have any gratification feelings from aiding the group. social animals do in fact sacrifice themselves on occasion to aid others of their species, and thus might be due to some sort of similarity in brain structure. i have yet to be convinced that highly complex fully dominant evolution are so likely that they should be taken as a given without seriously entertaining other ideas.
edit delete reply
alschroeder 16th Nov 2014, 4:14 PM
But would that explain, for instance, cross-species altruism, like the ASCPA or PETA, or the gorilla mother who threw the human child out of the zoo cage back to the human mother? And there are undeniable "benefits" to being selfish-- to gathering goods and prestige for yourself and your children--so why do people who act differently regarded as being almost universally revered? (Ghandhi, Schweitzer, Annie Sullivan...)
edit delete reply
jamoecw 19th Nov 2014, 1:51 AM
well what about furries and zoophilia? drives that were meant for within a species can certainly turn towards other species. in addition different species can come together for mutual benefit, making the urge to help other friendly species quite beneficial from a survival standpoint.

as for selfish people not being revered, there is ayn rand and her followers. which is just the most recent version of the philosophy of the morality of selfishness. the oldest version of such that i know of is yangism (http://en.wikipedia.org/wiki/Yangism) which seems to have evolved into taoism. taoism believes that one should find balance between helping oneself and helping others. if this is in fact true that philosophical taoism evolved from yangism, then logical altruism is the philosophical evolution of logical selfishness.
edit delete reply
Post a Comment