THE PROBLEM OF EVIL (PROLOGUE) 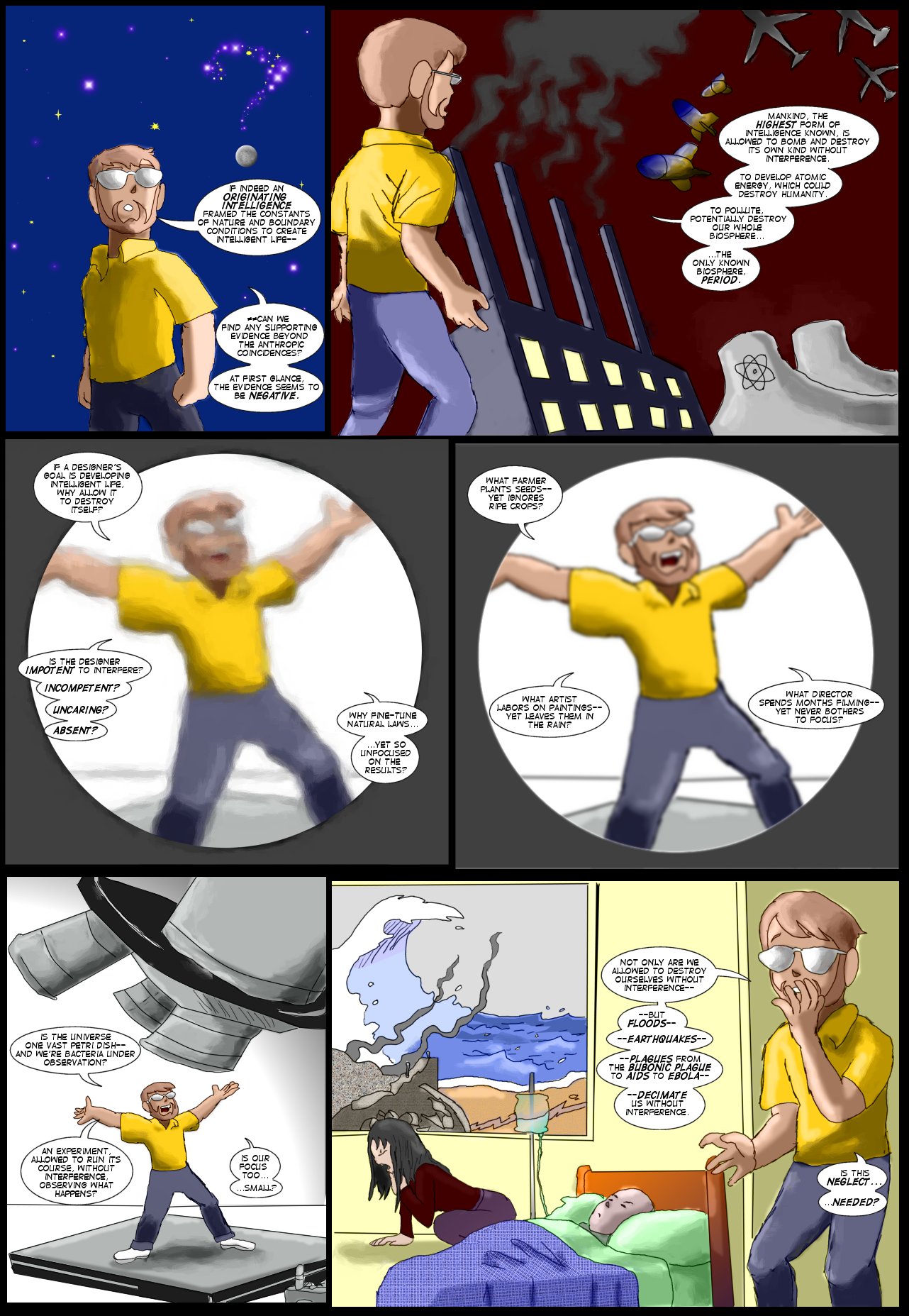 12th Oct 2014, 1:45 PM
Average Rating: 5 (1 vote)
Rate this comic
Author Notes:
alschroeder 12th Oct 2014, 1:45 PM
Continuing a look at the origin of reality...largely inspired and derived from George F.R. Ellis' brilliant brief book, BEFORE THE BEGINNING. He is NOT responsible, though, for the liberties I've taken with his logic or how I've chosen to illustrate it.

This is of course the oldest criticism of the idea of God...of an intelligent Designer. What is arguably the oldest book in the Bible, Job, addresses it explicitedly. Later works like Hume's work uses it to devastating effect. It's really two questions---the Problem of Evil (why does God allow evil by humans to happen, if He is benevolent?) and the Problem of Pain (why does random accidental or natural disasters or diseases happen to good people if He is benevolent?)

"My life has been remarkably happy, perhaps in the upper 99.9% of human happiness, but even so, I have seen a mother die painfully of cancer, a father's personality destroyed by Alzheimer's disease, and scores of second and third cousins murdered in the Holocaust. Signs of a benevolent Designer are pretty well hidden."--Stephen Weinberg in the SKEPTICAL INQUIRER. Other remarks from Weinberg on this subject are given here in "A Designer Universe?". (His remarks on the production of carbon are a little out-of-date, as mentioned in the concluding page when we were discussing the first coincidence, though.)

Here I tried to remove a lot of presuppositions about such an Originating Intelligence (ultra-benevolence, omniscience, omnipotence) and address it purely on the anthropic coincidences. If something intelligent framed the constants, the boundary conditions, to create intelligent life eventually, why is there no sign of any protection of that intelligent life? Is that acting...intelligently? Even if we fall far short of what that Originating Intelligence hoped for, still wouldn't He/She/It protect us more, like a farmer protecting a growing plant, both from the vagaries of nature and from ourselves-- if such intelligence is one of the goals of that intelligence?

If a parent let his children harm each other or themselves without interference, they would be arrested for neglect.

A Designer who just Designs and sits back and watches it unfold is a Deist postiion; but it would make little difference in our lives day-to-day....and certainly undercuts the idea of an Originating Intelligence's...intelligence.

What good is a Designer who doesn't care about what it went to some trouble to design?

Unless... there is something a little more subtle going on.

Unless... our very outrage is a clue.