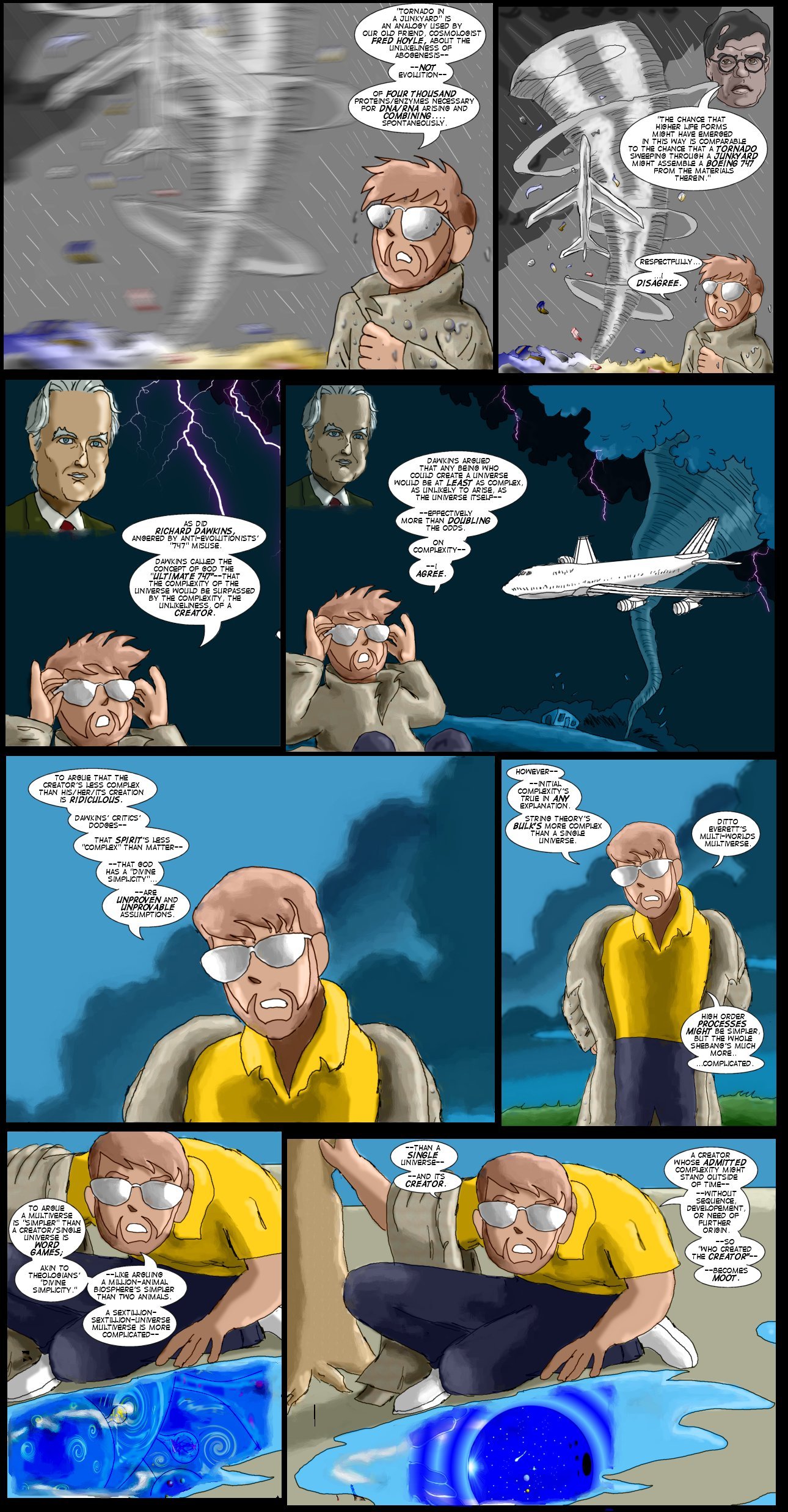 5th Oct 2014, 3:44 PM
Average Rating: 5 (1 vote)
Rate this comic
Author Notes:
alschroeder 5th Oct 2014, 3:44 PM
Continuing a look at the origin of reality...largely inspired and derived from George F.R. Ellis' brilliant brief book, BEFORE THE BEGINNING. He is NOT responsible, though, for the liberties I've taken with his logic or how I've chosen to illustrate it.

The problem of abiogenesis is a fascinating one. The unlikeliness of DNA/RNA--an enormously complicated molecule, but such a self-reproducing molecule is needed for any life and evolution to take place--is a stumbling block for many, and caused longtime atheist Anthony Flew to consider a Creator the most likely answer towards the end of his life. Many of the explanations given--self-reproducing crystals in clay, for instance, as precursors to DNA--are dubious at best.

Here one is sorely tempted to attribute the miraculous to the mysterious. I personally don't, although I can understand the temptation.

However, the fact that amino acids are found in nebulae argues that, in effect, the field of possible chemical laboratories is much wider than the earth---in fact, universe-wide. Such a huge number of "laboratories" makes the odds much more respectable. That, combined with the self-organizing properties of some amino acids, makes me doubt anything miraculous---in need of direct, divine intervention-- in the origin of DNA/RNA.

However, Dawkins' argument that God is the "ultimate 747" is flawed---not on the complexity side, but on two counts: first, the need for an infinite regress of divine Designers for other Designers. If the Originating Inelligence created space-time, then He/She/It's no more in need of further sequence than Hawking/Hartle's four spatial dimensions that (somewhow--without sequence!) became three spatial dimensions and one time dimension. It's just in this case the original "condition" would be intelligent and complex. (Question: could no-time, instead of having literally no sequence, instead mean that an eternity of happenings--thoughts, plans, etc. happen in literally no time? Or was it just emerge as that complex? Either way would have this intial comlexity.)

Secondly, Dawkins--I'm not sure deliberately, or if he missed it, as did most of his critics--made an invalid comparison. A multiverse of at least a sextillion sextillion "universes" is much more complex, by any reasonable standard of complexity, than a single universe and a Creator, who admittedly must have a model of the complex universe in His/Her/Its mind...just as a pair of animals (say, a mother and its child, or maybe a beaver and its dam might be a better comparison) are much less complex than a million-animal biosphere. A Creator only adds to the complexity more than the multiverse itself if you take the multiverse, not a single universe, as a given.

Interesting philosophical slight of hand. You can read Dawkins' thoughts from THE GOD DELUSION here and judge for yourself.

Next time: THE PROBLEM OF EVIL (PROLOGUE)

I really like how your metaphor of a pair of breeding creatures versus a complete biosphere shows the way Occam's Razor gets mis-applied.

The question should always have been, "which is simpler, a self replicating process, or all the entities that could ever arise from that process given the action of descent with modification for better adaptation to an environment".

Enumerating every soap bubble that will ever exist, in every bubble bath ever drawn throughout history, is not more complex than "surface tension". It's just one thing either way. One natural law.

An infinity of spatially separated pocket universes being the natural outcome of one real thing, inflation.

Or Everett's Many Worlds; uncountably huge, but manifests naturally from one thing: Schrodinger's equation.

What about the laws of a possible creator's own reality?

Consider the question, "which came first, the chicken or the egg"?. Once you understand evolution, there is an answer. The egg came first.

Which came first, a possible creator who can manipulate the laws of existance, or the laws of his own reality, where the creator came into existance?

If the laws of existance allow the spontaneous generation of (infinite) universes, over which some creator manipulates laws to produce a specific universe, wouldn't it be plausible to say that some subset of these infinite universes could be amenable to our form of life, no conscious direction needed, no need for higher realms? Occam's Razor, indeed.

I love his sense of humor!

By the way, a blog post by Laurence A. Moran, discussing a paper by Sousa, Thiergart, et al, gives a nice overview of the state of current research on abiogenesis:

man in black 5th Oct 2014, 11:04 PM
Great page
edit delete reply
Al Schroeder (Guest) 6th Oct 2014, 1:51 AM
Great links, Tom! I have real doubts whether cosmology is equipped to solve some of the questions Sean posed due to inherent limits of the scientific method, but those are THE questions, the important questions, no doubt. I've read Sean Carroll's blog, but not every entry. The abiogenesis link was fascinating also.

No one's doubting Schrodinger's equation, the key is the interpretation of it. I'm fairly confident of inflation in this universe. I'm a little more skeptical of eternal inflation. I know some say a universe is the ultimate free lunch---that the negative energy of gravity counterbalances the positive mass-energy. Still, you have to consider the process. Many-worlds, for instance, demands a billion universes EVERY SECOND. All without ANY additional energy or input?

It's kind of funny. We're all creationists now. The disagreement is whether its a one-time (or reasonably low number) conscious decision by some entity, or some process that creates universes far in excess of any religious persons' wildest dreams.

We don't know if other universes exist, (plausible theories often fail in actual experiment; here we don't have that confirmation) and even if they do, if they can have different constants (which is the only instance in which they would have any bearing on the anthropic question).

It seems...rather tenuous. But then, I guess so do my conclusions. *Grin*

But I hope to buttress them with other factors. I'll be laying the groundwork next week.


edit delete reply
Al Schroeder (Guest) 6th Oct 2014, 2:23 AM
Oh, and here's a link to Vilenkin and Tegamark responding to Ellis' scepticism of the multiverse. I think you'll enjoy their comments.

The Case for Parallel Universes. That is of course in response to Ellis' article, which I've referenced before, Does the Multiverse really exist? Please note this paragraph in there:

"Patterns in it suggest that our universe really
did undergo a period of inflation. But not all types of inflation go
on forever and create an infinite number of bubble universes. Ob
-
servations do not single out the required type of inflation from
other types. Some cosmologists such as Steinhardt even argue
that eternal inflation would have led to different patterns in the
background radiation than we see [see “The Inflation Debate,” by
Paul J. Steinhardt;
Scientific American,
April]. Linde and others
disagree. Who is right? It all depends on what you assume about
the physics of the inflationary field."
edit delete reply
Al Schroeder (Guest) 6th Oct 2014, 2:27 AM
Oh, and here's "The Inflation Debate" referenced above. Fascinating stuff.
edit delete reply
Post a Comment