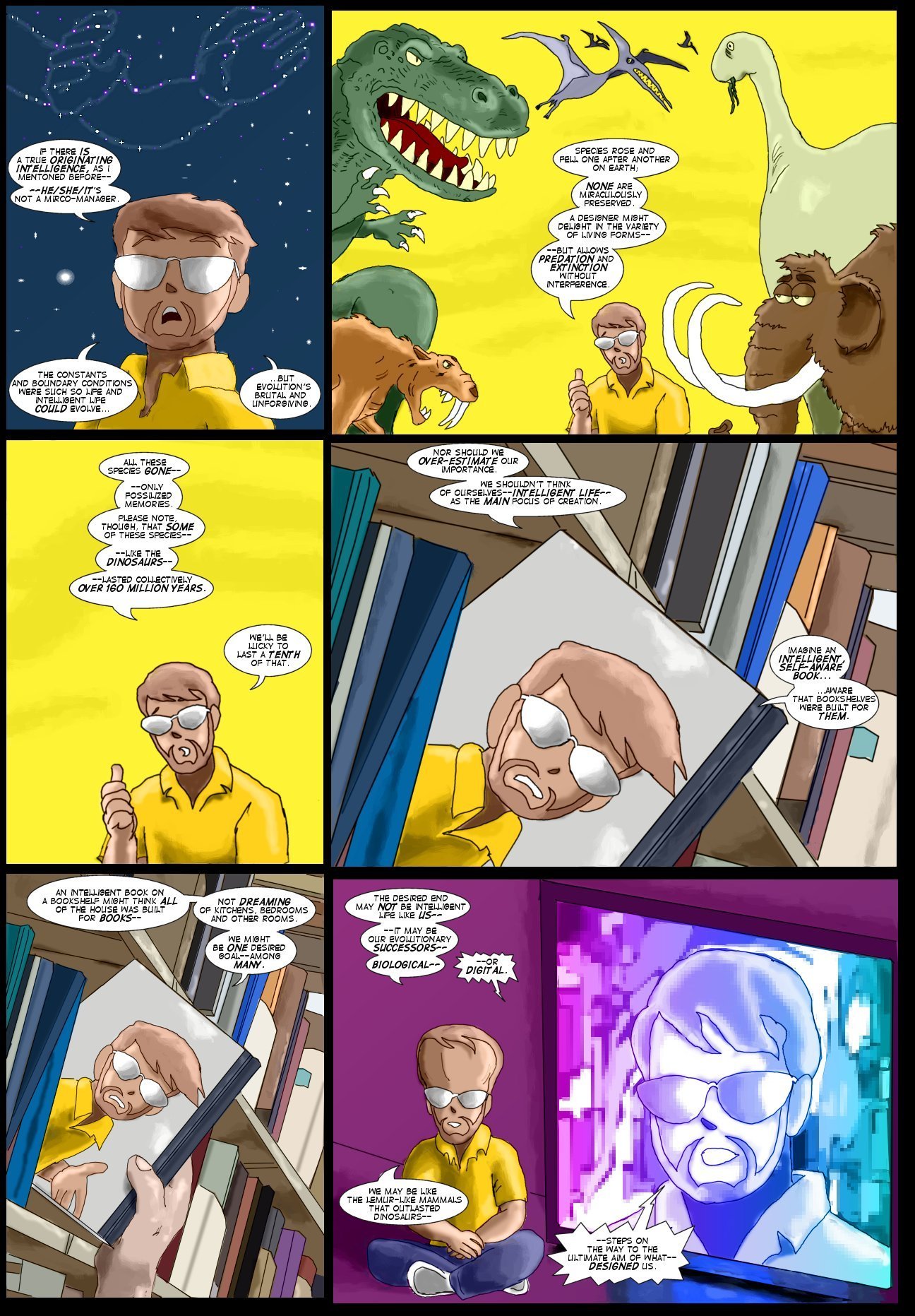 21st Sep 2014, 11:32 AM
Average Rating: 5 (2 votes)
Rate this comic
Author Notes:
alschroeder 21st Sep 2014, 11:32 AM
Continuing down the list of six possible explanations for the "anthropic" coincidences in nature which allow intelligent life to evolve...largely inspired and derived from George F.R. Ellis' brilliant brief book, BEFORE THE BEGINNING. He is NOT responsible, though, for the liberties I've taken with his logic or how I've chosen to illustrate it.

Despite the above,this one is mostly my own thoughts on the matter. It's true that the Originating Intelligence allows evolution and predation to proceed in all its messy, sometimes homicidal, even genocidal path, without interfering. Some would say that would make the Designer incompetent, impotent, or malevolent. Others would answer a level, impartial "playing field", run by definite rules is most conducive to developing intelligence.

I'll touch on that later.

I also wanted to make sure that everyone understands that because our existence seems to be built in to those initial conditions--if deliberately designed, we needn't necessarily be the main goal. We MIGHT be--or we might just be a side item, similar to a bookshelf. Humility as well as Copernican thought would suggest we not over-estimate our importance in the ultimate scheme of things.

Nor, if intelligent life is the goal of the cosmos, should we necessarily consider ourselves, or creatures of our intelligence level in this cosmos, the end goal. The goal MIGHT be our evolutionary successors---whether biological or artificial intelligences we create.

We mustn't make ourselves too important.

Our mirror site on Drunkduck won an award for best Philosophical/Political comic, which was a delightful thing to wake up to Thursday morning.

Next time will be our fiftieth page. It'll be an important one.


Next time: CHOOSING AMONG THE EXPLANATIONS

frettle 21st Sep 2014, 1:39 PM
well done with the award - think I would agree with the separation of philosophical from political

excellent stuff, only one of two comics I know on CF that I really do wish I'd done myself... which is a big complement [puts ego back in box]
edit delete reply
jamoecw 21st Sep 2014, 8:20 PM
i think that is an important part of the theory. too many people want to think themselves important, but realistically if we were important there would be immortality thrown into the mix. maybe we are just an experiment and whatever created us is just watching to see what happens, and we are just an interesting oddity in the grand experiment. i've even heard the whole this life is just a test thing (from multiple religions), so whenever you reach a point in which you question things you have to reach the conclusion that you are not the center of everything.
edit delete reply
tom (Guest) 21st Sep 2014, 9:49 PM
Al,

Hey, congradulations on the Drunkduck award.