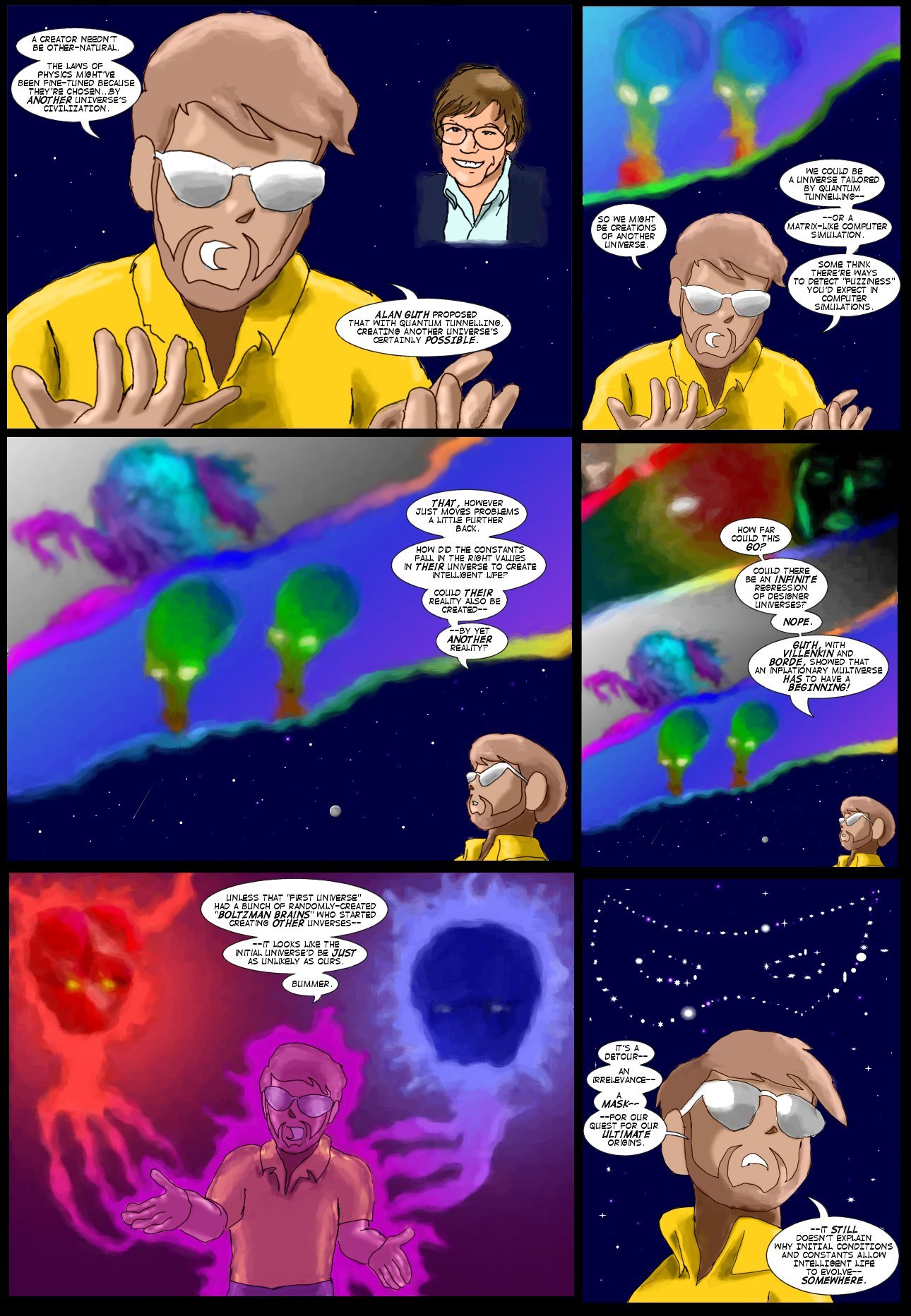 14th Sep 2014, 12:17 PM
Average Rating: 5 (2 votes)
Rate this comic
Author Notes:
alschroeder 14th Sep 2014, 12:17 PM
Continuing down the list of six possible explanations for the "anthropic" coincidences in nature which allow intelligent life to evolve...largely inspired and derived from George F.R. Ellis' brilliant brief book, BEFORE THE BEGINNING. He is NOT responsible, though, for the liberties I've taken with his logic or how I've chosen to illustrate it.

I felt as long as we're discussing possible Creators, I might look at theories about our universe being created in a more---ah--conventional manner.

And why they're really irrelevant.

Oh, doubtless it is of TREMENDOUS import if we find we live in a simulation or are in a "created" universe tailor-made by extra-universal intelligent beings. But since they haven't manifested themselves for thousands of years in any form we can recognize, they're not making any direct demands on us.

And their origins are just as "iffy" in some respects as ours. Oh, SOME of the constants might be even more favorable than our own for intelligent life to arise, but things like the number of spatial and temporal dimensions would be true no matter what other constants are involved, and would have to be fine-tuned.

As far as our quest for "why things are so fine-tuned" they're, at best, an added, complicating step that's really just takes the same question back a step or two.

Here's a article about how we might be a computer simulation of another reality. However, the latest tests give at best conflicting results, and my money is on us not being any sort of simulation or sub-creation. But the question's still open...

But doesn't answer the fine-tuning of the constants question---somewhere.


Next time: THINKING CREATIVELY: SOME IMPLCATIONS

When Guth, Villenkin, and Borde showed that an inflationary multiverse had to have a beginning, didn't their work also show that once the process begins, it continues eternally?

What I'd like to pin down is how long ago, how many past iterations of individual universe lifetimes, did the original one occur. That is, once the cycle of "inflation followed by big bang, repeat" begins, it never stops. But we want to locate the first instance of this thereafter eternal process.

We can pretty much rule out the possibility that we live in the first universe: the probability would be calculated as (1 divided by however many universes you think would be created by an eternally repeating process). A really small probability. We can also rule out living in the last one for the same reason.

It'd be most likely we live in some average universe somewhere along that timeline. So measuring back to the initial instance would span an awful lot of universe's lifetimes. Whether it's at the 50th percentile, or the 25th, or even just at the 10 percentile point, that's a really big number of universes.

How many years for the lifetime of just one universe? Well, our's might be one example: perhaps as long as the time from the Big Bang of our universe until the last supermassive black hole evaporates and our universe reaches equilibrium at maximum entropy. That's a really long lifetime.

So, no matter if the multiverse came about by purely natural means, or through some conscious choice, it seems most likely to have happened a mind-bogglingly long time and number of universes ago.

Alan Guth has a good book on this. It's title is "An Inflationary Universe".


edit delete reply
jamoecw 14th Sep 2014, 6:04 PM
isn't that the problem with all theories? even in the big bang there was something to begin with, even if time didn't exist. thus there will always be a beginning before the beginning issue. the whole 'what came before that?' question can always be asked, no matter the answer, unless the answer is that there was nothing before that. at which point you have spontaneous creation without reason or cause.
edit delete reply

man in black 14th Sep 2014, 11:44 PM
Great page
edit delete reply
Al Schroeder (Guest) 15th Sep 2014, 12:07 AM
Oh, yeah, that was the theory. A good article about it (cited in the strip about the theory is here. Two problems: despite my respect for Guth and my view that inflation in our universe solves too many puzzles not to have happened, the scalar fields proposed aren't presently varifiable and many never be; so their actual properties--which might differ from what Guth proposed--can never be tested. Also, that initial universe would have to fall in certain constraints for such a scalar field to have started---so, again, we're faced with how are we so lucky. It doesn't matter whether we're a deliberate creation in someone's basement--or a process of blind ever-fractalling inflation---the beginning still needs explanation.
edit delete reply
tom (Guest) 15th Sep 2014, 6:28 PM
jamoecw,

Exactly right. As you've said in earlier comments, science is making observations and evaluating the soundness of different theories based on how well they model those observations.

When I say Big Bang, I'm refering to the point when inflation in our local pocket of the multiverse came to an end.

Here's what I understand to be the current view of what happened:

Thanks to the LHC, we know that the Higgs mechanism is not just a mathematical construct. It actually applies to the real world. This would be an observation.

There's strong evidence that primordial inflation is real. Flatness. Variation in the Cosmic Microwave Background. Possibly BICEP2. These would be observations.

Per the theory describing inflation: it's supposed to be ongoing throughout the multiverse, and because of quantum considerations, it's an unstable condition. It can randomly stop or start locally at different points in space and at different times.

Because inflation is a process of exponential expansion per unit of time, it will always overwhelm the no longer inflating patches; there will always be a greater volume undergoing inflation than where it's stopped, Again, it's just in the math of inflation theory.

One of the places where inflation stopped locally is what we see in our universe. The observation here is that the current rate of accelerating expansion of our universe is very low: i.e., it't not as high as would be required to precede a big bang.

Our Big Bang happened when the local collapse of inflation made all the (local) Higgs field's energy available for E=MC^2 to work with. The energy was converted into what we observe in our universe: photons, leptons, quarks, neutrinos, etc. (Presumably dark matter and dark energy, too). We can measure the non-dark stuff and compare them to theory. Observations.

And heat. Which we observe now as the CMB.

All those particles were moving around real fast back then.

That's the Bang. It was Big.

Then normal expansion takes over. Observing the current size of the universe.

I like to think of it as the Big Bang had to be preceded by a Big Brake.

(This is neat because it reduces the question of "where did all the matter and energy we observe come from", to "where did that first little bit come from", and this doesn't seem nearly as daunting a problem for future resolution).

So anyway, that's what I mean when I say Big Bang.

Is that different from what you have in mind?

But doesn't inflation require the presence of a scalar field? And since we agree that inflation is a real thing, doesn't that moot the question of necessarily needing to know the specific properties of the scalar field that brought about the inflation?

I mean, inflation is real, therefore the scalar field associated with it had to have the right set of properties, whatever they might need to be. Determening the actual ranges of those properties becomes an interesting secondary problem for future research.

In the Guth article you mention, he says that essentially any form of inflation leads to eternal inflation. I've seen the same from Andrei Linde.

When you say that the conditions in the initial universe might have to fall within a certain range to produce a scalar field, I don't think the real question is whether a particular pocket universe can create another scalar field.

The initial universe was a product of inflation. Only after a local pocket of space/time stopped inflating would that universe undergo it's big bang. Inflation precedes big bang.

Would it make sense to say a universe was created by the inflation produced by a scalar field that the universe created after it was created? (Just typing that made me a little dizzy).

So wouldn't the order be: initial scalar field associated with initial inflation, followed by a local collapse of that inflation, giving rise to the big bang of the initial universe. In the mean time, the rest of space/time continues eternally inflating at an exponential rate, popping off pocket universes as it goes.

Guth also says that any explaination of the initial scalar field will require an extension to current physics. There really are many open questions.

I think the question of "how long ago and how many past universes" is a good one to pursue.

I must stop typing now. (Jeez. About time. Right?)


edit delete reply
jamoecw 16th Sep 2014, 7:25 AM
all bangs need to be preceded by a counterforce. when the force is overcome there is rapid motion, also known as a bang. you don't need special math to predict this. in fact if you look at explosions and certain fundamental principles of them inflation becomes a given during the initial stages of an explosion this principle is quite clear. from the outside this is observed as the shockwave. shockwaves are quite uniform, and have a specific frequency based on the speed of the initial expansion. in a vacuum after the initial expansion there would be fairly uniform expansion based on the chemical composition of the explosion. parallels between the inflation theory and normal everyday explosions makes this theory quite easy to understand. given how often various patterns mimic each other between newtonian physics and proven quantum physics, i find this theory quite likely.
edit delete reply
Al Schroeder (Guest) 18th Sep 2014, 3:46 AM
Tom: even though I think inflation in this universe is the most likely answer to a lot of problems (the flatness problem, the horizon problem), I'm not as sanguine about the eternally inflating multiverse. Some of the problems are outlined here by Sean Carroll, who himself believes in inflation, but acknowledges its problems. Among other things, the initial inflating universe had some REALLY odd, fine-tuned properties which looks even more proposterous than the other coincidences. And I get REALLY nervous when we talk about things we can't really BEGIN to verify yet as "settled", as it were. Some things totally agree with theoretical models and fall apart, totally, when tested...so when we get so apart from possible testing, I can't help but consider...look, at the end of the nineteenth century, everything THEY knew told them if they measured a light beam's speed one way, and then the opposite way, one would be minus the earth's motion--but it wasn't. It was the same any way they aimed it. That result was totally unexpected and ONLY revealed by experiment. It was the impetus that led to Einstein's theories.
edit delete reply
tom (Guest) 19th Sep 2014, 12:43 AM
Al,

Thanks for linking to that article by Sean Carroll. I really think he excels at explaining complex concepts for everyone to understand.

He doesn't shy away from examining both the strengths and weaknesses of an idea.

I've been a fan of his blog, Preposterous Universe, for years.

I also recommend these posts of his:

http://www.preposterousuniverse.com/blog/2014/06/30/why-the-many-worlds-formulation-of-quantum-mechanics-is-probably-correct/
edit delete reply
TuuronTour (Guest) 21st Sep 2014, 11:16 AM
I seems appropriate that the "lady" from the Firstverse is cameoing here. I have always wondered how a whole universe could come into existence from nothing with a big bang. Nice to read a comic with some thoughts about that subject! Thanks.
edit delete reply
Post a Comment