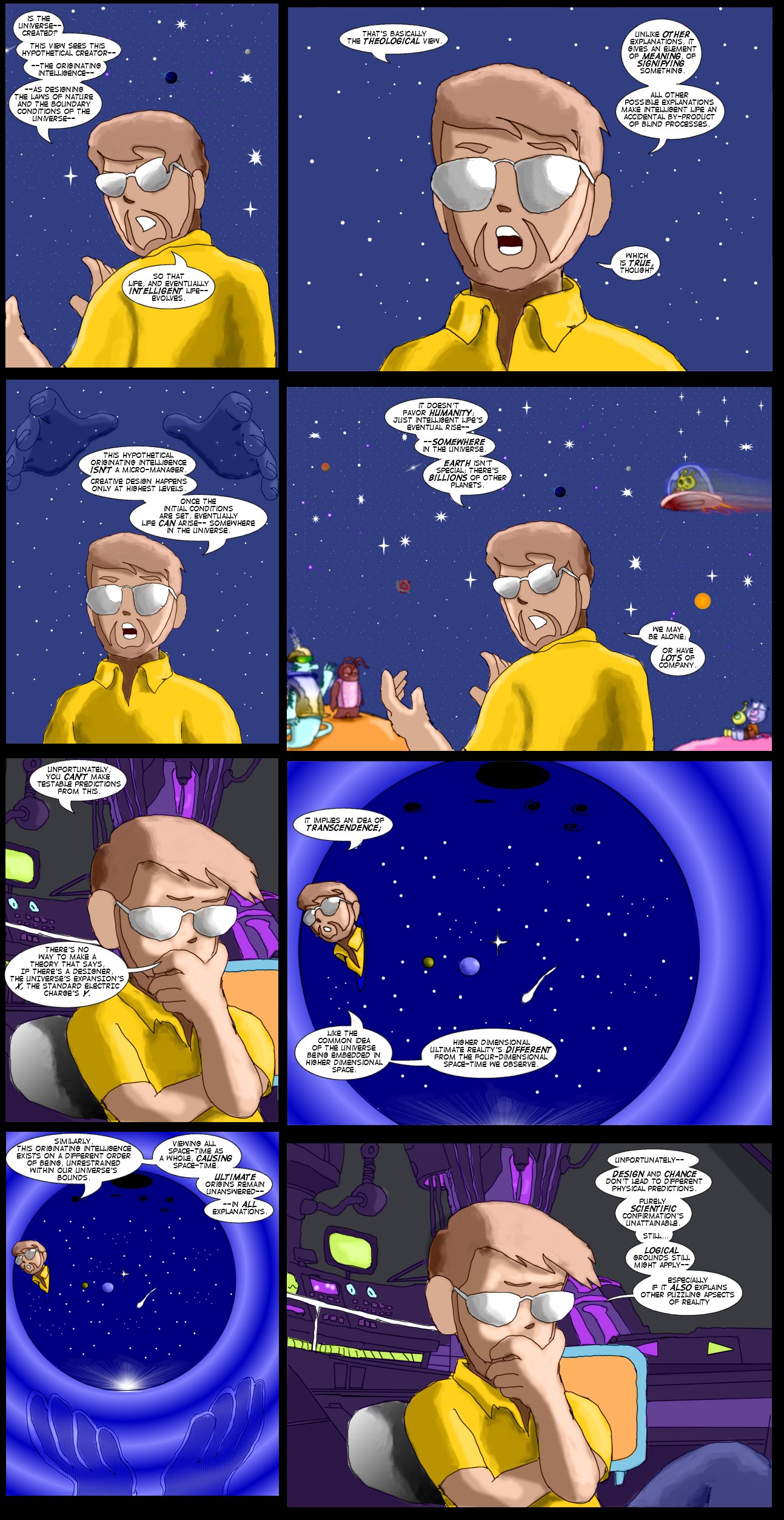 7th Sep 2014, 3:11 PM
Average Rating: 5 (2 votes)
Rate this comic
Author Notes:
alschroeder 7th Sep 2014, 3:11 PM
Continuing down the list of six possible explanations for the "anthropic" coincidences in nature which allow intelligent life to evolve...largely inspired and derived from George F.R. Ellis' brilliant brief book, BEFORE THE BEGINNING. He is NOT responsible, though, for the liberties I've taken with his logic or how I've chosen to illustrate it.

It's true that the Design explanation gives an extra layer of meaning to it. That doesn't make it true, of course.

This Originating Intelligence is perfectly content to let natural selection take its course. In the broad details, it's close to a Deist view--that this Originating Intelligence started the universe in the broadest terms, and lets the laws developed take their course. Theologians, of course, have covered such ground for centuries, long before Hume voiced doubts on Design on such grounds. Still, I don't think the Designer need be aloof or uncaring. But I'll get to that later.

Again, the anthropic coincidences only apply to the development of life, and eventually, intelligent life in the universe as a whole. Earth may be an oddity; but surely there are thousands more similarly as odd, given the great number of planets we have found circling other stars, and the presumption that stars far beyond our capacity to measure the possibility of planets also have planets---that we don't live in a planet-bearing "bubble" of stars-- in a great planetless "desert" of galaxies.

The inability of strict science to decide between the explanations isn't because the question is meaningless. It's because science is extremely successful because, by its very nature, it restricts itself to what it can test and predict. The universe, being unique, is unable to be tested, either in varying its initial conditions, or comparing it with similar objects (because there's nothing similar to the entire universe we can reach) and science thus cannot decide on ultimate causation. Science is great in describing how, but is not successful, in the large picture, in explaining why.

How this higher reality---with or without an Originating Intelligence--came about is unanswered in ANY of the six explanations. For instance, if you favor the "bulk" and "brane" theory of String Theory, there is no ultimate explanation for the Bulk. If the "many worlds" explanation of quantum mechanics is correct, then there is no explanation of how the state of affairs--mindlessly multiplying existence a billionfold every second (an unintelligent creationism far in excess than any dreamed of by any theologian)--came about. If it's just chance, there's nothing that explains what "breathed life in the equations", in Hawking's phrase. So any criticism that the Designer's origins isn't explained applies equally to any OTHER explanation.

But if you just cut out the middleman and say the universe we observe is the foundation of everything, then you have to explain the anthropic coincidences...

Many mathematical theories are not testable by science, but can be proved by logical grounds--Goedel's Incompleteness Theorem, for instance.
I think there are (much less involved) logical grounds that can allow us to pick among the six explanations, but next week I'm going to discuss theories that our universe is created by civilizations from other universes--and the week after that I want to clear up some misconceptions in the Designer argument. The week after that, I'll explain why I think a choice can be made among the six explanations on logical grounds. After that, I'll discuss what I consider areas of knowledge which are made more understandable by that explanation.

Totally agree that we have to ask the question "What came before?" the intelligent creator, just as it's valid that we require some response to that question from every other theory. I believe you've brought this up in previous pages.

Also totally agree that the "How could it have been done?" question needs to be answered. Really looking forward to future posts.

But I'm wondering if "How?" should be expressed as "How could it have been done intentionally, yet would be impossible to plausibly happen spontaneously?" to best address the points of difference.

Trivial example: we manipulate electron tunneling every day. But what came before is that quantum tunneling has been spontaneously occurring since the Big Bang. (May even be part of the process bringing about the Big Bang).

We use a law of nature to create things, but it's plausible that we were created because of that law of nature.

I think all theories need to make some statement of their position on infinite regress.

Hope to see more on this.
edit delete reply

man in black 7th Sep 2014, 9:24 PM
Question, is the person explaining this a representation of you or just someone you drew up?
edit delete reply
Al Schroeder (Guest) 8th Sep 2014, 1:32 AM
Tom: I'm going to touch on infinite regress a little bit next time, and more a little latter.

Man in black: Oh, that's me. I've got more silver in that beard in real life, but I'm a brown-haired guy with a beard who wears glasses.

I hardly ever wear yellow short-sleeved shirts, though. Go figure.
edit delete reply
jamoecw 10th Sep 2014, 4:39 PM
well if you look like the character you drew then maybe you should, it seems to fit well.
edit delete reply
Post a Comment