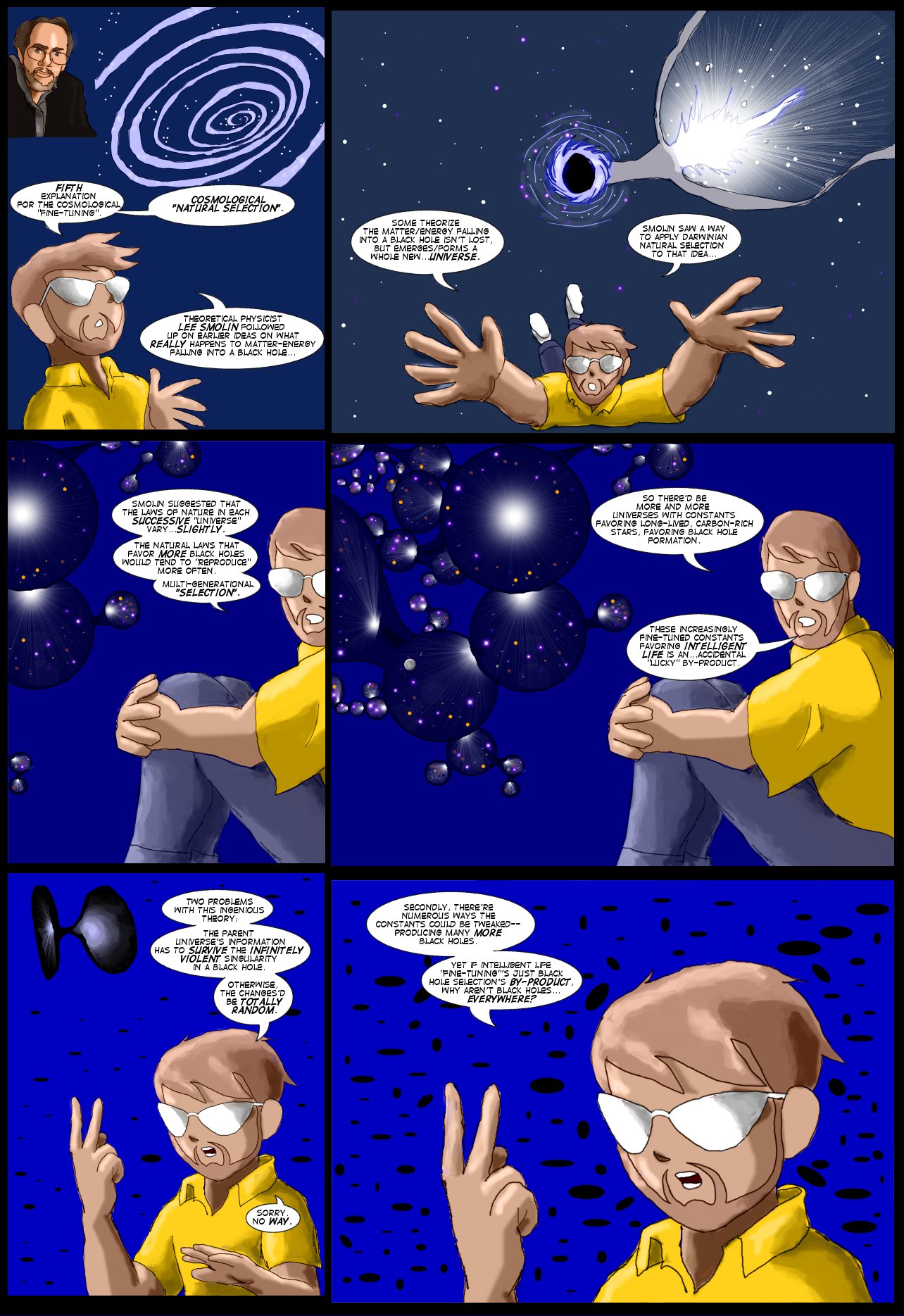 24th Aug 2014, 3:19 PM
Average Rating: 5 (2 votes)
Rate this comic
Author Notes:
alschroeder 24th Aug 2014, 3:19 PM
Continuing down the list of six possible explanations for the "anthropic" coincidences in nature which allow intelligent life to evolve...largely inspired and derived from George F.R. Ellis' brilliant brief book, BEFORE THE BEGINNING. He is NOT responsible, though, for the liberties I've taken with his logic or how I've chosen to illustrate it.

There are MANY things I like about Smolin's proposal. It makes specific results that can be falsified, which so far haven't been. He proposed the theory to a general audience in THE LIFE OF THE COSMOS, and a 2008 paper, "The Status of Cosmological Natural Selection" by Smolin, follows up on this.

Still...even if you accept that black holes can make "universes" (still unproven, and currently unprovable) the two objections remain. Lee Susskind refers to both in this fascinating back-and-forth between Susskind and Smolin on the "Landcape" idea and "Cosmological Natural Selection" here at "Smolin vs. Susskind: The Anthropic Principle". I actually think both made points in refuting the other's theories, but were not as successful defending their own. Susskind won a bet with Hawking about information surviving black holes and I think his answer is quite good. The idea of any information carrying over to the new universe, even the very constants themselves, after such information has been sliced, diced, and shredded in a black hole's heart is...pretty hard to believe. It's like telling me you were able to make an almost complete copy of Shakespeare's HAMLET after burning, dicing, and putting in a blender your only print version of HAMLET.

Also see "Is there a Darwinian Evolution of the Cosmos?" for a better summation.

Smolin points out that Darwin couldn't tell how mutation and genetic inheritance or traits really happened when he proposed the theory of evolution, since DNA hadn't been discovered yet. But no one doubted the passing down of traits from one generation to another--it had been used for centuries in the breeding of dogs and other pets, and cattle and other livestock for centuries. Nor was it unknown for the occasional "sport" (read: mutation) to occur--a child who in some respect was different from both its parents. If Darwin couldn't tell exactly how it happened, it nevertheless was an observed fact for thousands of years. So the analogy to Darwin is overblown, since we can't observe these theoretical universes formed by black holes, and cannot observe how they might differ from their "parent" universe...IF they exist at all.

Fascinating try at explaining the "anthropic" coincidences, though. I wish I could believe it.

User comments:
jamoecw 24th Aug 2014, 6:57 PM
"since we can't observe these theoretical universes formed by black holes, and cannot observe how they might differ from their "parent" universe...IF they exist at all."

that says it right there. until we can find some way of looking at things in a black hole, or in other universes (given that a universe is all that there is {noun - 'all existing matter and space considered as a whole'} it would be just a different section of the universe even if the fundamental properties change) it is completely unverifiable. given that the earliest motto of science was "Take nobody's word for it" then it effectively is a faith until any evidence comes around supporting it.

given the general concept, one could say that once a black hole reaches a certain point in it's life cycle it will explode (go nova like a sun), resulting a big bang like effect that knocks away existing stuff and lays the foundation of a new 'universe' type area. such an event would push away or destroy existing black holes (like novas and suns) which would make an area from having too many black holes (and solve the problem you presented).

as the mix causes more black holes, the more stable the black would be, and thus the longer before it exploded. given that nearby less stable black holes are likely to blow up and destroy such a black hole there is a low likelihood of such a black hole surviving to create a new 'universe' type area. a black hole that doesn't lend itself to black holes would not be likely lend itself to reproduction unless it was near an ultra stable black hole, in which the cross breeding would create an area with some black holes. of course variables that fall outside of the 'butter zone' for a stable universe would likewise not be likely to create 'offspring' unless paired with other things to balance it out.

of course this all assumes that existing black holes (and the 'universes' that they are a part of) may intersect other 'universes' with different properties given enough time.