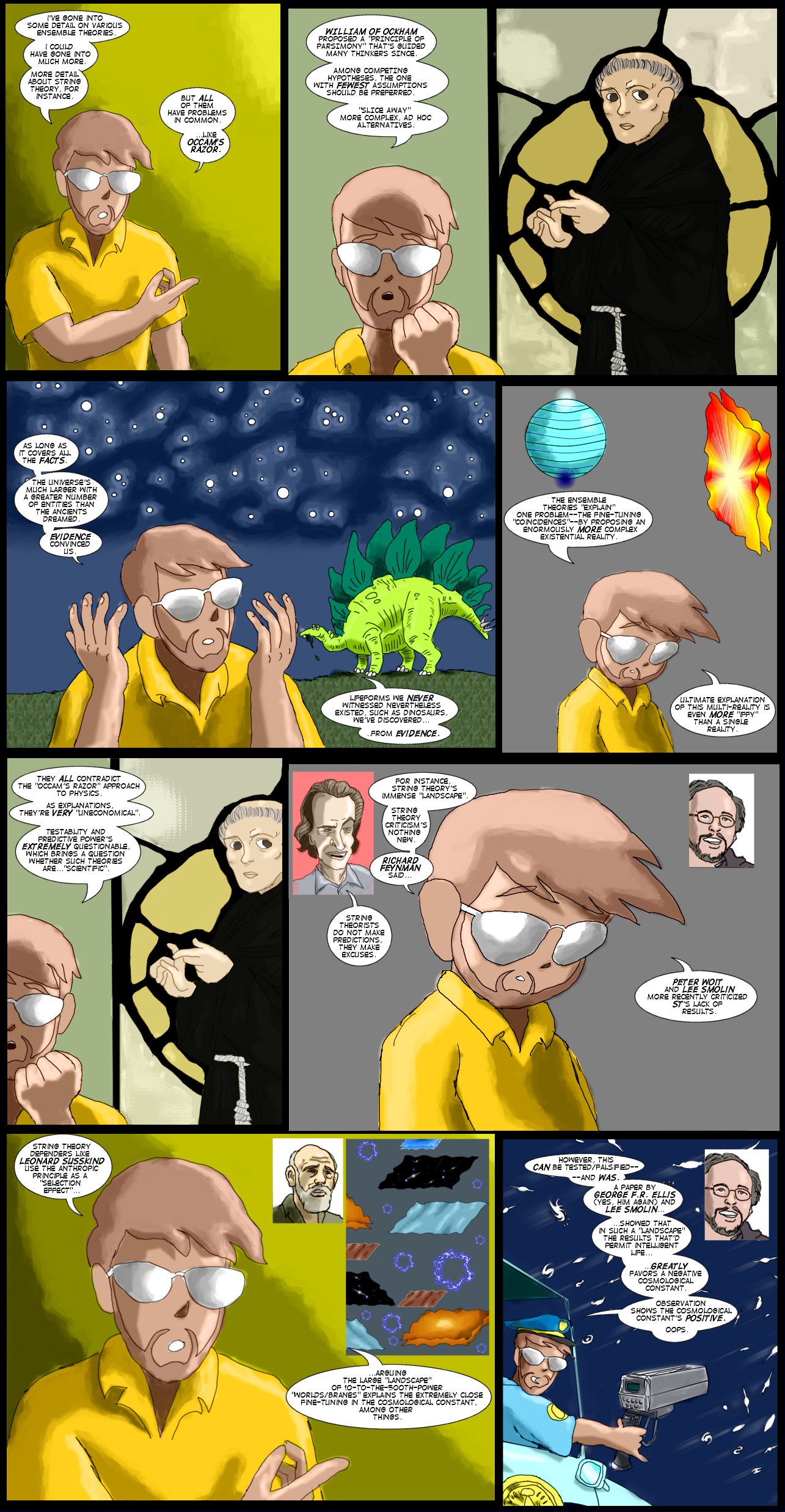 17th Aug 2014, 4:08 PM
Average Rating: 5 (2 votes)
Rate this comic
Author Notes:
alschroeder 17th Aug 2014, 4:08 PM
Continuing down the list of six possible explanations for the "anthropic" coincidences in nature which allow intelligent life to evolve...largely inspired and derived from George F.R. Ellis' brilliant brief book, BEFORE THE BEGINNING. He is NOT responsible, though, for the liberties I've taken with his logic or how I've chosen to illustrate it.

I spent some time on the ensemble theories, so I thought some final thoughts were needed.

The 2009 Ellis/Smolin paper mentioned above can be found here at "the Weak Anthropic Principle and the Landscape of String Theory". The essence is that a positive (increasing over time) cosmological constant is much less likely, in such a large ensemble using the anthropic principle as a selection effect, all other things being equal, than a similarly negligible negative (decreasing over time) cosmological constant. So one of the few times String Theory's Landscape can be used to make a prediction, it doesn't agree with observation, which does show a positive cosmological constant.

Lee Smolin's book criticizing String Theory is THE TROUBLE WITH PHYSICS and Peter Woit's is NOT EVEN WRONG. Leonard Susskind's THE COSMIC LANDSCAPE vigorously defends the Landscape and anthropic selection for much of the fine-tuning.

Each side claims their solution is better by Occam's Razor. Critics of String Theory says it multiplies entities a quintillionfold, but defenders of String Theory (and many other enemble theories) often say it is simpler in the number of categories needed, thereby satisfying Occam's Razor....for instance, that many-worlds, by eliminating a complicated collapse of possibilities by an observer, is simpler than the Copenhagen Interpretation. String Theory makes similar claims. Proof remains...elusive, though.

Peter Woit has a blog, also called Not Even Wrong, at

where he often examines the limits of different approaches to quantum theory.

This includes a hefty dose of shade thrown at speculative, unsupported claims coming from some in the string theory community, and more often from the science journalists covering them.
edit delete reply
tom (Guest) 17th Aug 2014, 7:29 PM
Al,

Do you find that Occam's Razor get misused sometimes? I mean, it's a useful tool to focus on practicallities when brainstorming. But doesn't it bug you when you see it used as though it's a rule, rather than a guideline?

I wonder how they would answer the question "applying Occam's Razor, do the vertices and line segments that comprise a fractal exist independantly of the equation that describes that fractal"?

(What would Plato say?)
edit delete reply
Al Schroeder (Guest) 18th Aug 2014, 12:18 AM
Oh, yeah, I know about Woit's delightful blog, NOT EVEN WRONG. I tend to read that and than find something to read by Joe Polchinski, one of the most engaging of the PRO-String theorists, to try to get both sides.

I'm not per se ruling out the multiverse---I just find it frustrating to see people using a presently unverified hypothesis to justify all the constants' oddly-convenient values for the development of intelligent life. Obviously many theists believe in alternate existences--Heaven, Hell, Nirvana, Sheol, etc.--and it's presumptuous for a theist to limit or constrain the inventiveness of a Creator. But using undetectable alternative universes to justify the universe we see's values strikes me just as odd as a fundamentalist telling me Heaven explains some physical facet of the observable universe.

String theory started as a laudable attempt to incorporate gravity with the other forces. Since then, it's become more speculative than fruitful science.
edit delete reply
Al Schroeder (Guest) 18th Aug 2014, 12:25 AM
Oh, yeah, Occam's Razor gets misused all the time. It's a good guide, but evidence will always trump it. And yeah, Plato would say Occam's Razor wouldn't apply to his world of Ideals as opposed to Actuals--the "shadows on a cave" idea.

Still if you make an explanation too elaborate, you can explain anything, in a Rube Goldberg fashion. That's where Occam's Razor can cut out a lot of nonsense.

And...truth to tell...I wanted to address Occam's Razor, because it has a bearing when I get to the case for a Designer. (Almost there, finally.) Two weeks, after I address Smolin Selection idea.
edit delete reply

in academia the risk of having one of the fundamental theories that support a field of study end up being no longer viable is so huge and disastrous that you often see intellectual bullying to keep the status quo.

the fact that our society relies more and more on such an industry is perhaps the scariest thing one can realize about the world. such a fault would result in stifling of innovation. a lack of support for hands on lab work. and a growing belief in the value of image over result.

most technology used is based on innovations half a century old, while a hundred years ago there was massive innovation which resulted in a rapid and widespread technological change in only a few years. most hands on learning in school has been cut back repeatedly and generally only happens with regularity at the highest levels of education today. the american dollar's value is backed only by the faith based in it. scary examples of what happens when free thought isn't allowed.
edit delete reply
Post a Comment