EXPLANATION FOUR: UNIVERSALITY IN MODAL REALISM: DOES EVERYTHING POSSIBLE EXIST...SOMEWHERE? 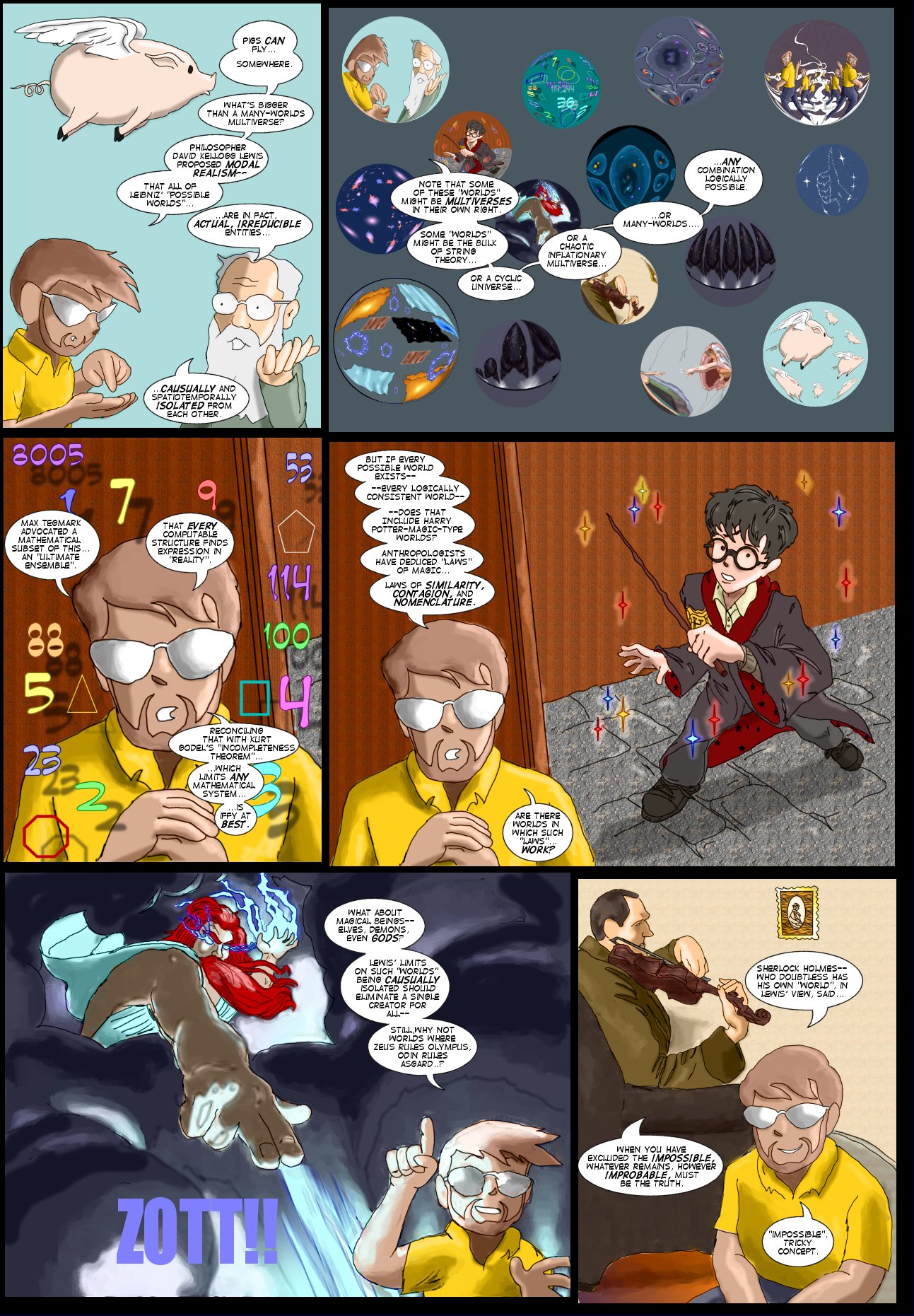 10th Aug 2014, 3:48 PM
Average Rating: 5 (2 votes)
Rate this comic
Author Notes:
alschroeder 10th Aug 2014, 3:48 PM
Continuing down the list of six possible explanations for the "anthropic" coincidences in nature which allow intelligent life to evolve...largely inspired and derived from George F.R. Ellis' brilliant brief book, BEFORE THE BEGINNING. He is NOT responsible, though, for the liberties I've taken with his logic or how I've chosen to illustrate it.

Obviously I'm a little sceptical about "modal realism". Lewis claims it's "simpler" in an Occam's Razor sense, in that it allows fewer CLASSES of objects, by not making a hard-to-determine distinction between "actual" and "unreal", claiming actuality is indexical, within the "world" you inhabit, not across all "worlds". Thus, you have a hugely expanded number of entities, but fewer classes of entities.

That's somewhat similar to the way "many-worlds" multiples the number of entities a billionfold every second, but claims to be "simpler" in an Occam's Razor sense because it doesn't require a complicated "collapse" of possibilities.

I'm a little sceptical that a quadrillionfold increase in entities is worth the loss of one or two complicating factors, eliminating an extra step or two. But I'll discuss Occam's Razor soon.

Lewis' PLURALITY OF WORLDS discusses this in depth. I haven't had a chance to read Max Tegmark's OUR MATHEMATICAL UNIVERSE, in which he espouses his "mathematical universe/computable universe" theories, but I have read his earlier "The Mathematical Universe" paper. To be fair, he did touch on Godel's incompleteness theorem and the implications for his computable universes, but since Godel's theorem applies to all but the simplest of mathematical systems, I have trouble swallowing it in this case.

If Lewis is right about causally independent "worlds" with no connnection to each other, there is no way to have one god who created it all, since that Creator would have no connection to all existences. (Which is odd, since both Lewis and Tegmark seem to agree the world of mathematics and sets are "real"---yet mathematics and sets seems to apply across all such "worlds".)

However, it seems you would have to allow all sorts of worlds that might have "gods" ruling them---worlds that have the Olympian gods, the Norse gods, the Mayan gods, worlds that reflect the Divine Comedy or a strict fundamentalist's world that began in 4004 B.C. For a nontheist sceptic, the result would be a cosmos where there could be no one overriding Creator--but it's a pyrrhic victory, because there seems to be no way to eliminate multiple Jehovahs, Zeuses, Odins and every other god ever conceived...not once, but multiple times.

Oh, here's a paper by Stoeger, Ellis and Kirchner on "Multiverses and Cosmology: Philosophical Issues" that addresses many of these issues.

Next time: ENSEMBLES: AN OVERVIEW

You're right, there should be a difference between saying "everything possible" and "everything imaginable". I can imagine the sentence "Everything I say is a lie", but try to parse that logically.

The question of whether some other universes in a multiverse might have their own gods raises some interesting points. However, we need to be careful how we use the label "god", many might have different ideas about what constitutes a god.

I'd say the most all-powerful definition of a god would be: a). Created the universe, and b). Can perform miracles, (where a miracle is an event that is not allowed by the laws of physics of that universe).

Question: Are there other properties that I should add to that list that would distinguish an all-powerful god from other entities in a universe who might call themselves gods?

If we're talking about any version of the Multiverse that I'm familar with, the individual universes are spawned by quantum mechanical processes, and the matter and energy they contain evolve into whatever arrangements are allowed by the values of the physical constants of that universe.
So, if I imagined that one of these universes contained a Zeus or an Odin, they would still be merely a result of the universe's existance, not its creator.

Further, any being that is the result of a particular universe is limited by the physical constants of that universe. Here again, I'm not aware of any theory that suggests otherwise.

It's possble to have different constants in different universes, but the set of constants of a particular universe constrain what is allowed to happen. Hence, a miracle becomes an oxymoron. Any effect achieved by one entity could be duplicated by others.

Zeus is a good analogy, he overthrew Kronos. They might be the strongest physically or politically, but heck, we've had people on our planet claim to be gods, too; didn't make it so.

A universe where everyone could be like Harry Potter wouldn't be magic, it would be normal. (For that universe). Ditto flying pigs, if allowed by the physics of that universe.
edit delete reply
tom (Guest) 10th Aug 2014, 7:22 PM
Al,

That IBM sponsored workshop on the foundations of quantum mechanics that I mentioned in last week's comments; I just now heard back from one of the organizers that they hope to have videos hosted on YouTube by a few day after the event.
edit delete reply
alschroeder 11th Aug 2014, 12:49 AM
Right, Tom. MOST gods are NOT Creators. The Judeo-Christian-Islamic Jehovah/Allah is very different. (There are a few others; Ptah in Egyptian mythology, Gaia in one version of Greek Myth, Night in another...) Most "gods" are second or third-generation "powers" that represent certain aspects of nature, with parentage, etc., in an already existing world.

Most scientific theories have quantum-mechanical worlds. But modal realism is philosophy, which doesn't need scientific justification or proof. Even so, a world with Harry Potter or even Zeus would probably have most of the same laws as ours---just with a few more added, or a few exceptions added.

A delightful series of stories hinging on the three "laws" of magic are the Harold Shea stories by L. Sprague de Camp and Fletcher Pratt.

BTW, I would love for some parapsychology department to "test" the laws of magic. To my knowledge no one has rigorously tested them. Wouldn't it be funny if they actually work? The Law of Contagion is oddly like quantum entanglement...

the miraculous stuff gods do are generally just referred to as 'powers' and not magic most of the time. this leaves a huge amount of interpretation for what a 'god' is.
edit delete reply

Yes, the difference between all possible worlds and all imaginable worlds.

Suppose Modal Reality was just a philosophy that doesn't require scientific justification or proof, yet can make the claim that "all Leibnitz' Possible Worlds are in fact actual, irreducible entities".

That right there sounds so sketchy that it almost begs to be eliminated from any serious discussion of why we find ourselves in the universe we actually inhabit.

Only a Pangloss could champion something built on that foundation.

But I think what Lewis was doing with the notion of Modal Reality was demonstrating a test for whether some proposition was possible. According to him, a proposition would be possible if, and only if, it could be shown to be true in one of these worlds.

I don't think he was argueing that literally all imaginable worlds must exist. Otherwise, for any proposition someone could name, he could imagine a world where that proposition was true, and therefore he could claim to be able to prove that anything is possible.

I don't think that is what he was doing.