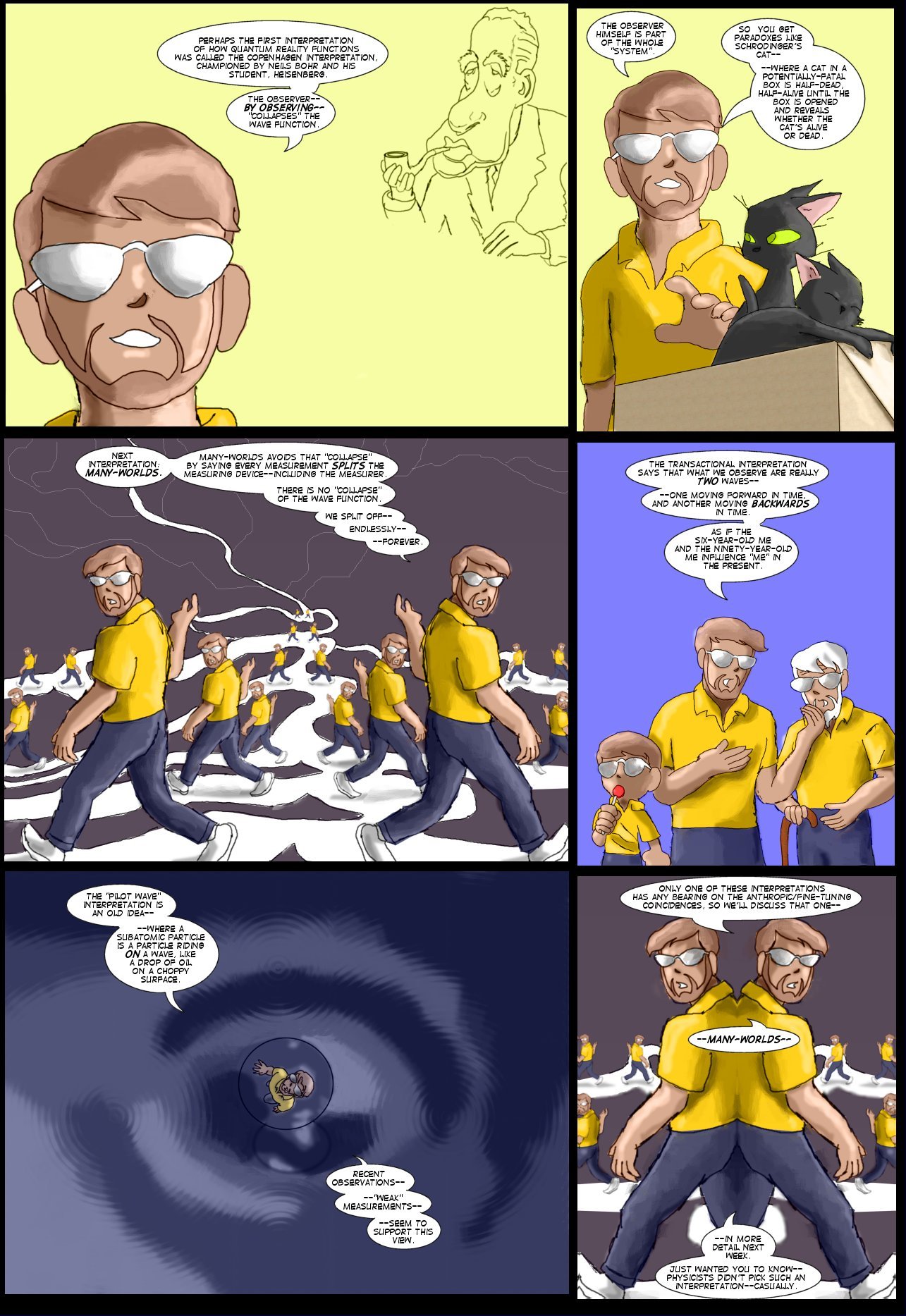 27th Jul 2014, 12:40 PM
Average Rating: 5 (1 vote)
Rate this comic
Author Notes:
alschroeder 27th Jul 2014, 12:40 PM
Continuing down the list of six possible explanations for the "anthropic" coincidences in nature which allow intelligent life to evolve...largely inspired and derived from George F.R. Ellis' brilliant brief book, BEFORE THE BEGINNING. He is NOT responsible, though, for the liberties I've taken with his logic or how I've chosen to illustrate it.

My opinion? Either transactional or pilot wave. For all their deficiencies and unanswered questions, they seem more likely than the others. But I want to consider the alternatives fairly, and many people I respect are firmly in the many-worlds camp.


It's not entirely true that the Copenhagen or Transactional interpretations don't have anything to do with the fine-tuning question. You could say the universe has to have laws permitting observers to evolve or the Copenhagen interpretation would have no observers to permit reality. (You can even make a case the entire universe needs an outside Observer to make it come into "being"...i.e., a case for God. I myself do not hold that to be a sufficient argument, but some have used it.) Or you can say---I believe Paul Davies is in this camp--that the fact that observers evolved, if transactional interpretations are true (and it's undeniable that some odd things happen vis-a-vis time at the quantum level) might "cause" the laws that would eventually result in observers.

The problem is that both arguments--even more so than MOST arguments about the anthropic principle--are truly tautological. It doesn't EXPLAIN anything. The universe has laws favoring the evolution of observers because it will someday have observers? Especially with the Transactional interpretation, that would mean that such effects would reach back billions of years, to early summetry breaking in the universe. I might believe in time-retardent waves going back hours, even days. But...billions of years?

It's also anti-Copernican, even more than most anthropic arguements. WE (observers) determine the shape and genesis of the universe, by just being here? It seems even more so than the standard Theist view, that we might be a possible goal for a Creator to set up initial constants and boundary conditions for.

And it just changes the anthropic question. Why do the laws of the universe permit a later observer to influence initial conditions?

And again--it's a true tautology--like saying Bill Gates had to develop Windows so I could be typing this up on a PC.


Next time: HAVING YOUR CAKE AND EATING IT TOO.