EXPLANATION FOUR: UNIVERSALITY IN SPACE: BEYOND THE FIELDS WE KNOW 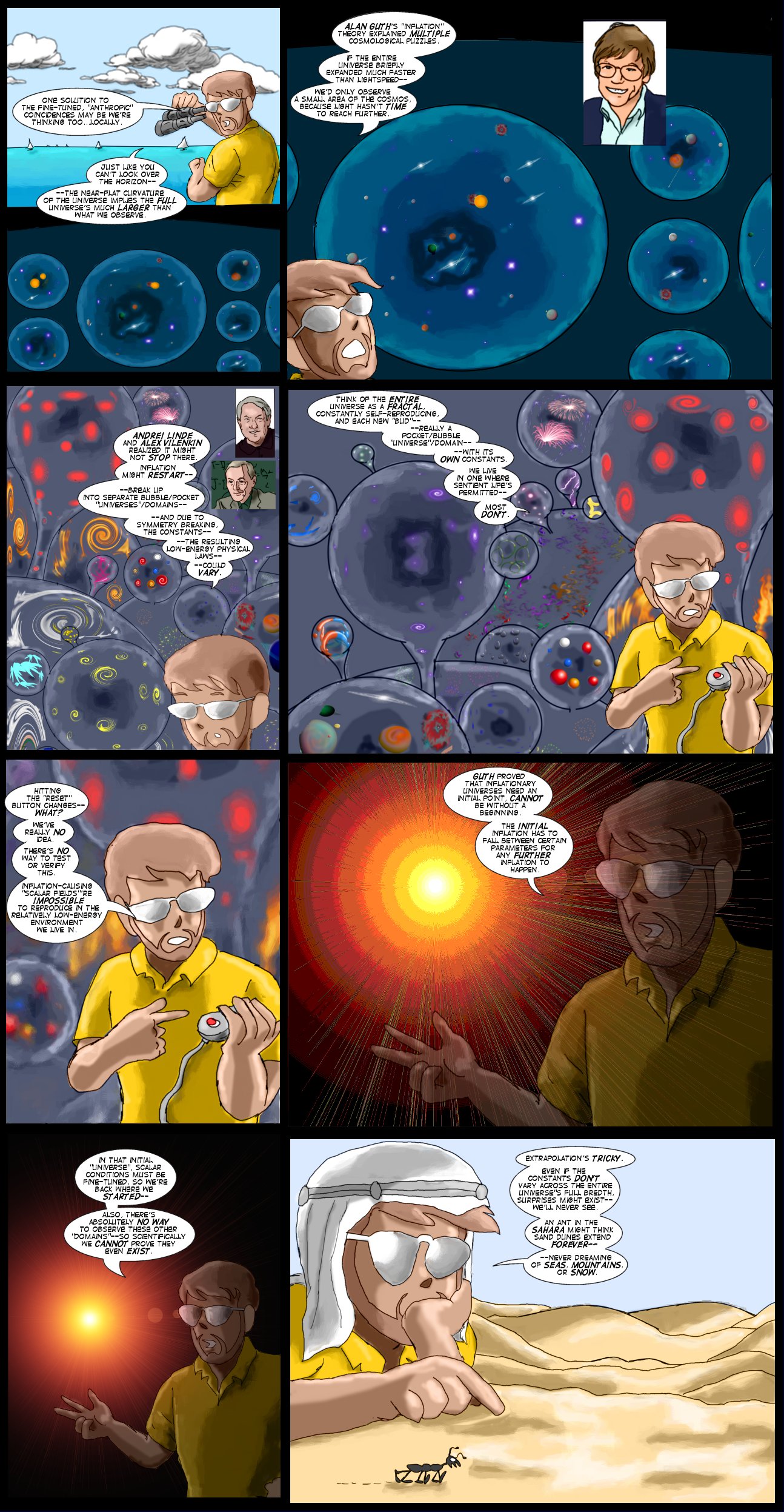 6th Jul 2014, 3:56 PM
Average Rating: 5 (1 vote)
Rate this comic
Author Notes:
alschroeder 6th Jul 2014, 3:56 PM
Continuing down the list of six possible explanations for the "anthropic" coincidences in nature which allow intelligent life to evolve...largely inspired and derived from George F.R. Ellis' brilliant brief book, BEFORE THE BEGINNING. He is NOT responsible, though, for the liberties I've taken with his logic or how I've chosen to illustrate it.

This "multiverse" idea is probably the most scientifically accepted explanation for the anthropic coincidences, but is by no means unanimous among scientists. Here I'm exploring "chaotic inflation", or a multiverse with differing physical laws, separated in space.

This is a complicated subject to discuss briefly. This Wikipedia article on inflation details many of the pros and cons, especially the flatness of the inflation potential and special initial conditions, and the theories proposed around them.

I think there's little doubt basic inflation took place--it explains too many puzzling features with one stroke. I'm more sceptical of domains with differing constants, but it doesn't resolve the fine-tuning coincidences, just moves it further back in time.

The scalar fields that would cause inflation? "experimentalists have yet to demonstrate their existence, let alone measure their supposed properties. Crucially, physicists have not substantiated that the dynamics of these fields would cause different laws of physics to operate in different bubble universes."--George F.R. Ellis, "Does the Mutliverse Really Exist", Scientific American, August 2011.
Here's a link to "Eternal Inflation and its implications" by Alan Guth, in which he also discusses the need for an initial state, that inflation can't be eternal in the past.

Here's a link to "Inflation, Quantum Cosmology and the Anthropic Principle" By Andrei Linde.

And here's an article, "Biggest void in universe may explain cosmic cold spot" for an alternative explanation for the cold spot that some claim as "evidence" for a bubble universe collison.

P.S. The "ant in the Sahara" analogy is Ellis'.