EXPLANATION ONE: TAKE A CHANCE 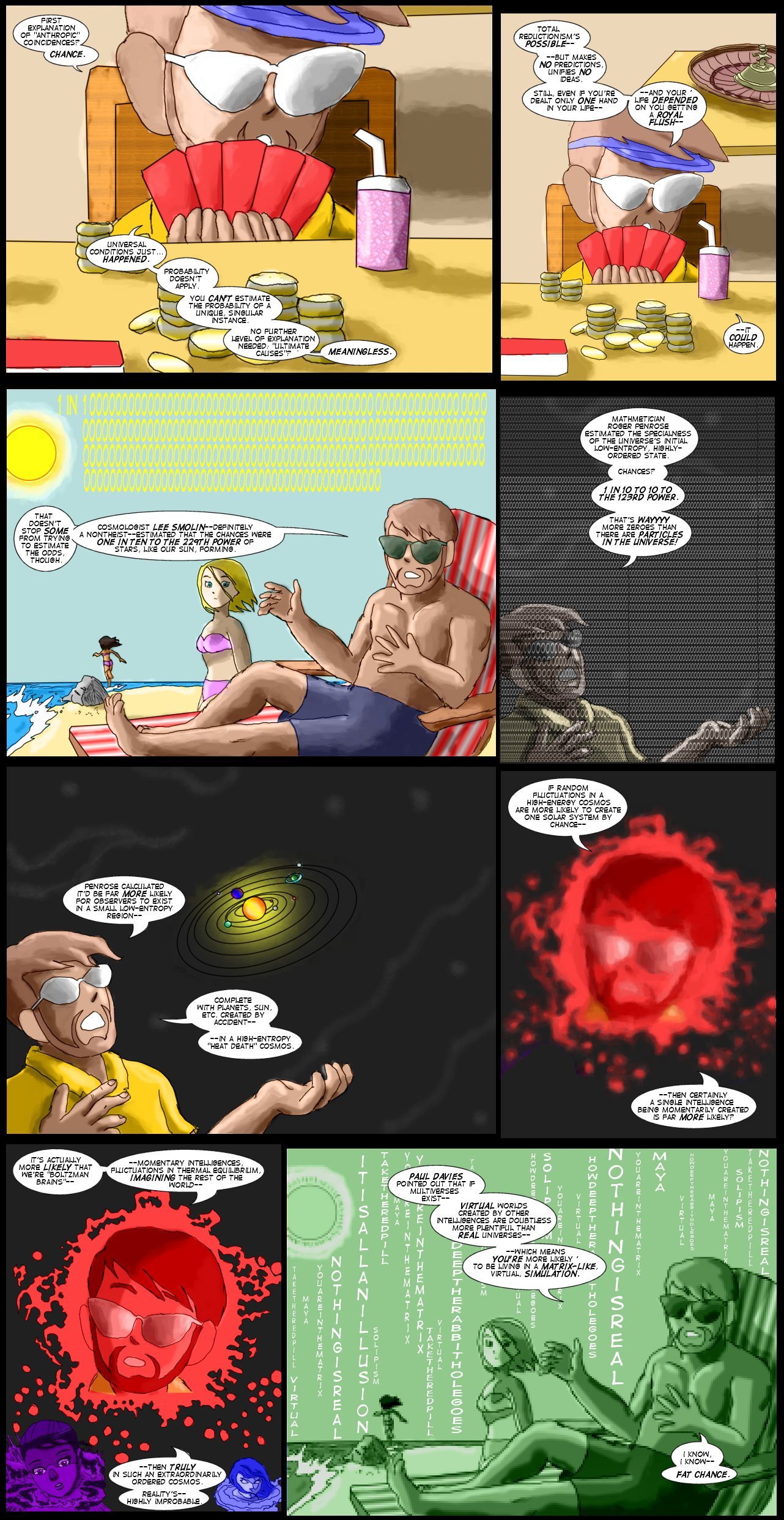 A LOT of people try to calculate something that should intrinsically defy probability--a singular instance--like the universe's beginning.

Penrose is not a theist either, instead having his own theory of cyclical time, which we'll get to later.

Penrose's observation about a small low-entropy region being more probable than the highly-ordered observable universe means that if there IS a hypothetical Creator, His/Her intent is not to create US--not just one particular world, one intelligent species--but to allow many such worlds to come about.

Proton mass to Planck mass: for a star to live more than a billion years means the ratio must be 10 to the minus nineteenth. So the odds of that are 10 to the nineteenth power.

The electron and the neutron must match each other's mass to an accuracy of 10 to the negative 22 in planck units, so the probably of that is 10 to the 22nd power. Same is true of the neutrinoes. The chances of that in three rolls of the dice are 10 to the 66nd power.

Strengths of the four main forces: range from strong nuclear force to weak and electromagnetic force, is one to 100 in ratio. That's 1 part in 100.

Range of those forces. Some range the entire universe, like electromagnetism. The weak or nuclear forces only go as far as the nucleus. The ratio of these forces or at least 1 in 10 to the 40th power.

The chances of a world like ours being picked by just random assignment of properties to these forces and constants to create a universe lasting billions of years and nuclear and atomic physics more or less like ours--is one to 10 to the 229th power.

User comments:
tom (Guest) 8th Jun 2014, 8:20 PM
I don't think I've ever heard any cosmologist or quantum theorist make the claim that the universe we observe is the only one that exists, and that it's physical values are what they are, purely by a one in a bazillion lucky break, with no mechanism at all to explain their provenance.

It's good to eliminate pure chance right away. It was never seriously on the table to begin with.

re: the description of Smolin's calculation.

The proton's mass, (really the mass of the quarks, gluons, etc of which it is constituted), comes from the Higgs field.

Similarly, electrons and neutrons, (another composite particle), get their masses from the Higgs field.

Why does electromagnetism operate over universe-sized distances while the weak force only operates on a subatomic scale is explained completely by the Higgs mechanism. (The Higgs mechanism is how the Higgs field does it's thing).

Changing the value of the Higgs field affects all of these together. They're not really independant.

That said, I agree that the odds are still one in a very, very big number.

On the issues of Boltzman brains, Sean Carroll has a helpful viewpoint. He suggests we use it (them?) as one test of a theory's validity.

He'd say: take the observable fact that we live in a universe where conscious disembodied brains don't randomly appear out of nothingness. Therefore, any theory that requires Boltzman brains to proliferate is probably on the wrong track. A theory that minimizes or prevents their occurance has a much better chance of correctly modeling reality.

Boltzman brains aren't a problem, they're a measuring stick toward discovering a solution.
edit delete reply

It's really not that bad. There are a lot of really smart people working to bring clarity to these topics. Just don't try to eat the whole whale at one time.

Each week, pick a phrase or concept to google or wikipedia. (Can I use that as a verb?)

Do the same for one of the scientists named.

Nobody gets it all at once, but it can be fascinating even to just nibble around the edges.