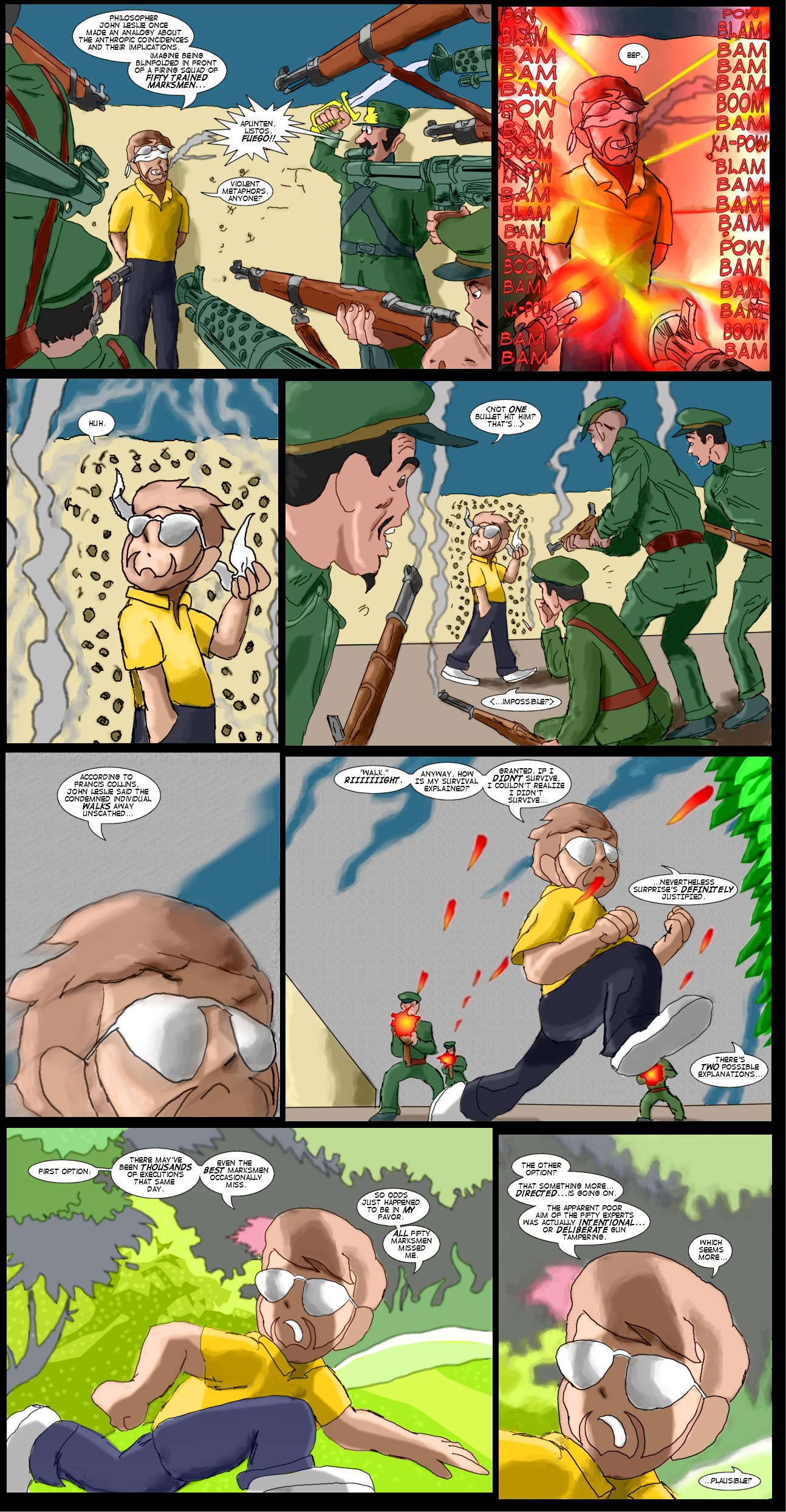 I don't smoke, but somehow "I" didn't look right in front of a firing squad without a cigarette dangling from my lips.

Again, when it comes to the anthropic coincidences, it's not the explanation of each individual one that's so puzzling; doubtless science will give us reasons for each; it's the additional fact that all these different coincidences--not seemingly related--result in a universe which can develop intelligent life....when it could have so easily NOT have.

This CLUSTER of coincidences--like the fifty separate guns aimed by the firing squad--cries out for its own explanation.

In the above scenario, I definitely would have been looking for bribing of the marksmen, or tampering with their rifles. I think most people would.

Most people would NOT think it reasonable to say, "Of COURSE they misfired. Otherwise, I wouldn't be here to wonder about it." Yet some people say EXACTLY that about the anthropic coincidences.

Nevertheless the choice in the anthropic coincidences is NOT just between blind chance and deliberate design. There are other possibilities.

We'll start on the possible explanations... next time.

We need to think a little bigger. How about starting with 100 trillion.

If the probability of an individual gun jamming, or rifleman missing, or ammunition misfiring were 1 in 5000, then even with 50 riflemen, there would still be millions of events where the prisoner lives, purely by chance.

Even freakier, inflation and Everett could both be right. So how many chances would a prisoner have to survive somewhere in an infinite space filled with infinitely branching multiverses, purely by chance alone?

This is really getting good.
edit delete reply
Al Schroeder (Guest) 25th May 2014, 2:23 PM
We'll get to ensemble theories pretty soon...i.e., both Everett's and inflation many-domain theories as modified by Linde.

But just a thought:

What CAN'T you say happens--if there are infinite branching multiverses? Does an explanation that can explain EVERYTHING, that allows everything--does it really explain ANYTHING?

But we'll get to it. I'm probably going to spend more time on various ensemble theories than any of the other explanations, with one exception.
edit delete reply
tom (Guest) 25th May 2014, 5:54 PM
Not sure where a branching multiverse would allow everything. I think all an Everett branching does is actualize all possible states of a quantum measurement. If a quantum state is not allowed, there will be no branch there.

So while it explains everything, it doesn't allow everything.

Everett branching at the time of a universe's big bang would spawn individual universes with random mixes of values for, among other things, the properties you've identified as necessary for life. In many of these initial branches, those values could prevent life from developing. But in some, the mix of values would be amenable to life. Luck of the quantum draw.

man in black 25th May 2014, 10:18 PM
great page
edit delete reply
Guest (Guest) 30th May 2014, 3:01 PM
Theory 1 makes no asumptions. It's just a "random fluke". You would be surprised how often those happen with computers. "Turning it off and on again" does solve that many issues for a reason!

Theroy 2 asumes:
There is a being interested in a certain result.
It is able to influence the situation

Ochams Razor favors one.
While it does not offer any comfort, nobody ever said the laws of physics and propability have to offer comfort.
edit delete reply
Al Schroeder (Guest) 31st May 2014, 2:37 PM
Oh, Occam's Razor DEFINITELY favors one. Trust me, we're going to talk about Occam's Razor. It's going to be essential to the point I'm building to.

But in this particular case (the firing squad) I think MOST people would feel something interfering is the most plausible reason.

But chance is definitely a possibility. The next one will try to sum up ALL the possible causes.
edit delete reply
Frith Ra (Guest) 4th Aug 2014, 8:45 PM
There was a firing squad, of 750 men, which missed the two people it was targeting in 1850. Fascinating story, & the main "victim" of said squad was teaching people about God.