COINCIDENCE TWELVE: QUANTUM OF SCIENCE or SOMETIMES BOHR-ING IS GOOD 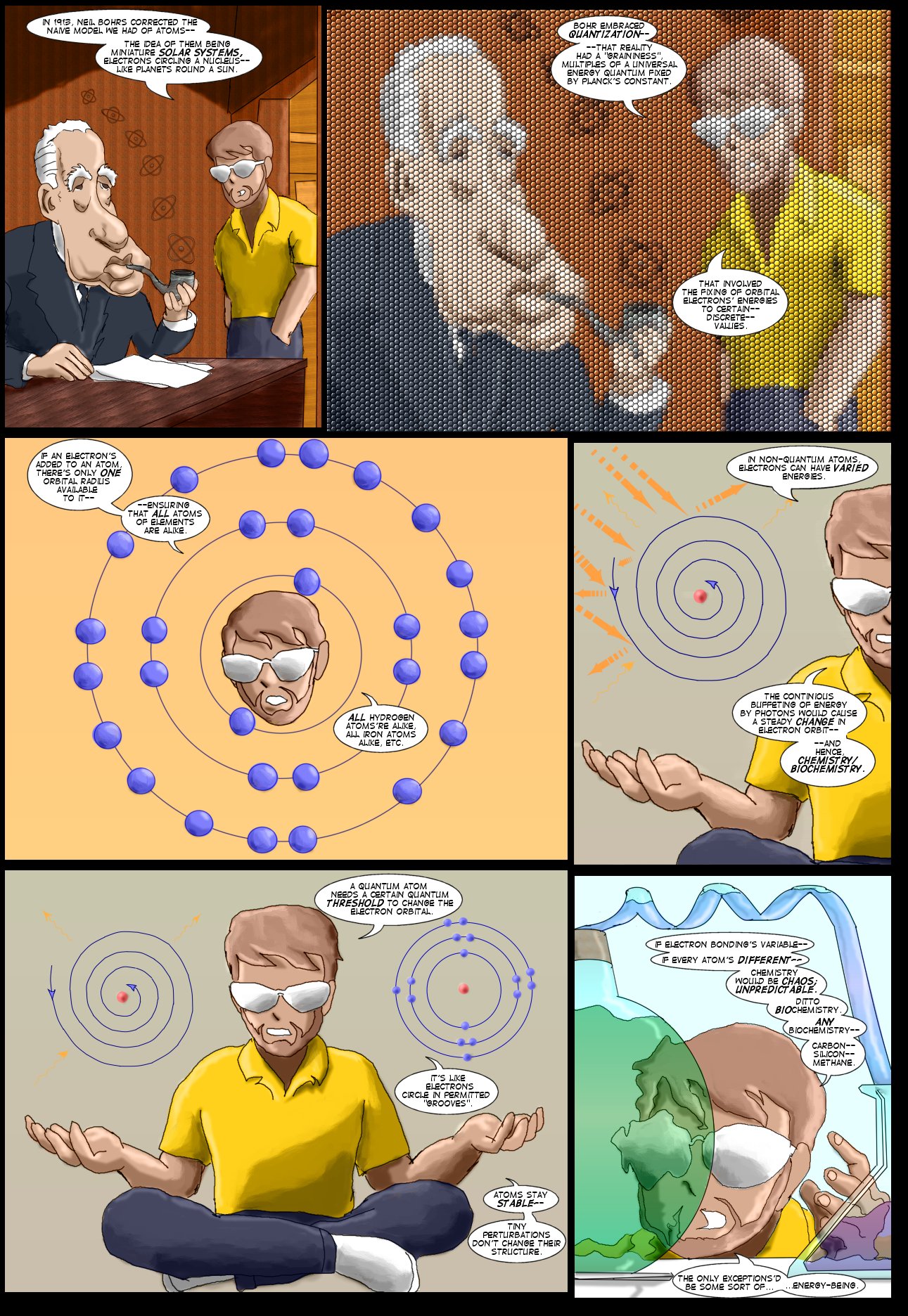 Also, Max Planck demonstrated if electrons circled a nucleus, in a non-quantum atom, they'd be particles moving through an electric field and would emit photons which would cause the electron to spiral in---effectively destroying the atom in a short while. It was he who first proposed quanta for atomic-scale energies, but Bohr took it much further, as did Heisenberg and others.

There's a lot more to quantum theory, and it plays into the possibility of life in numerous ways---ultraviolet catastrophe, anyone? But this is the most direct effect on life. Without a consistent chemistry, there can't be a consistent biochemistry. You can't have reliable reproduction, either, if every atom is as variable as every solar system is in space. Without reliable reproduction, evolution is IMPOSSIBLE, because it depends on selection pressure on successive generations. So even by some miracle you got some sort of lifeform, it would never reproduce or evolve.

This one's a little different from some previous coincidences. It's not so much the numerical value of it (unless we look at the value of Planck's constant, which this is a multiple of) but that atomic reality is different from macroscopic space, due to the "graininess" inherent in quantum theory. If atoms behaved (albeit in a smaller scale) the same way as solar systems, varying as much as our solar system from Sirius' solar system, there would be no elements, per se, no consistent chemistry at all. Which means no life, unless energy-beings are possible. Even then...hmmm, maybe I SHOULD have exlained the "ultraviolet catastrophe".

I could do more coincidences, but I think I've made my point. So...

Next: An analogy of why an explanation is needed...in front of the Firing Squad. (Courtesy of John Leslie.) After that--possible explanations for all these coincidences.

Do you think it's possible for a quantum system to spawn a process that's not also fundamentally quantum in nature?

I mean, our universe traces back to the big bang and inflation. Both of which require a quantum reality to happen at all. They can't be derived by classical means.

So if the universe started out quantum, (and the Cosmic Microwave Background and the CMB B mode polarization show it did), then we'd need a mechanism that could "switch off" all quantum effects after the (quantum) beginning, leaving only a classical framework to describe all later fundamental reality.

I'd think if that were possible, there'd have been unexplainable events showing up in SLAC or Fermilab or the LHC data streams. Or perhaps if even higher energies are needed to manifest this mechanism, we'd see anomalies in WMAP or Planck or BICEP2 data that defy quantum predictions.

If the choices are quantum or classical, and classical is impossible, I don't see any real issue here.
edit delete reply
alschroeder 1st Jun 2014, 11:36 AM
Good point.

However, the SCALE at which quantum effects "kick in" does matter. In theory, quantum effects could kick in at a much smaller value (there's a vast difference between the size of an atom or even an electron and the Planck scale, for instance.) If the Planck scale were even smaller, which would still allow the Big Bang (from an initial quantum fluctuation) and inflation, but might render the atom comparatively "large" enough that it would be covered under classical rather than quantum effects, we would have the same conundrum.