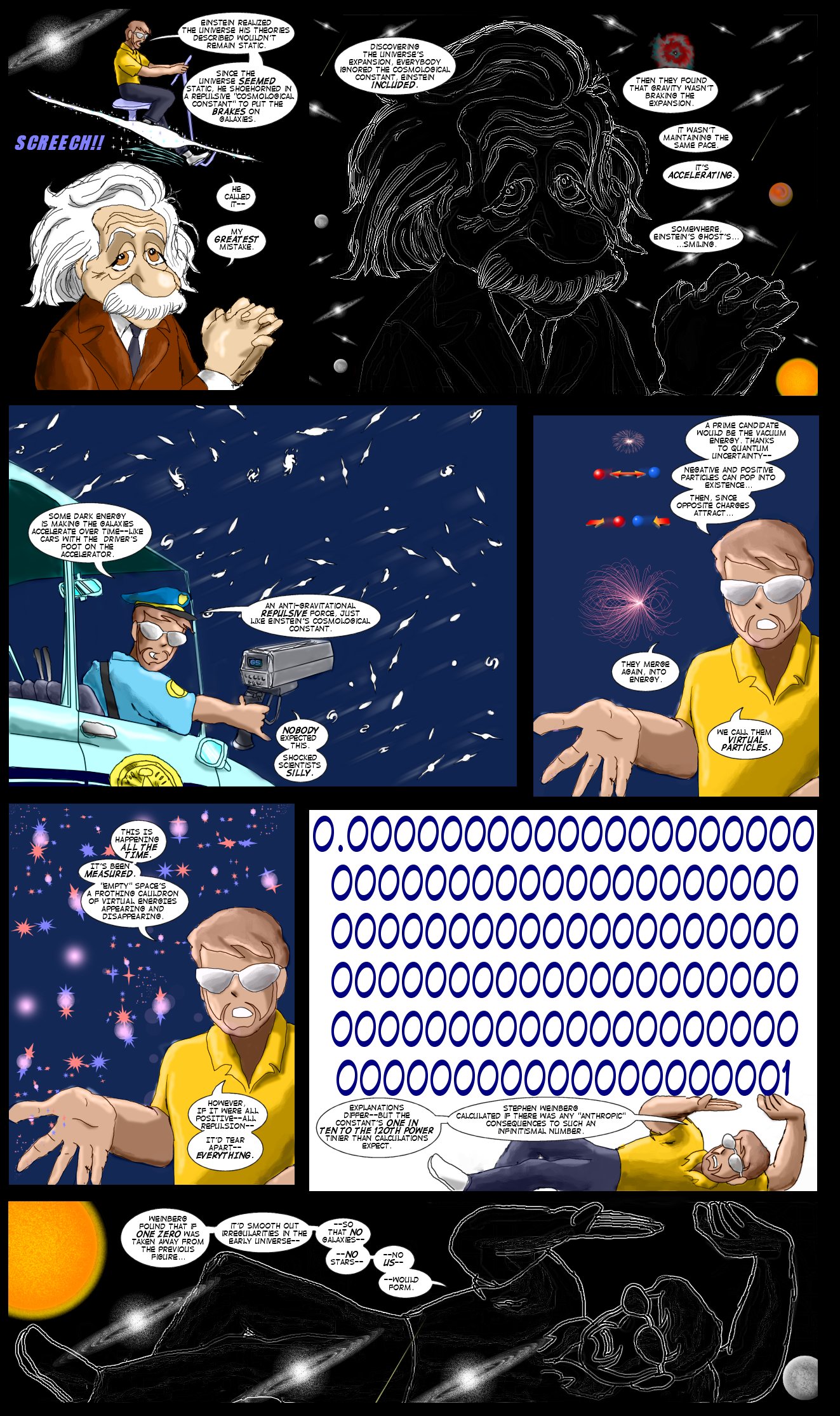 11th May 2014, 10:19 AM
Average Rating: 5 (1 vote)
Rate this comic
Author Notes:
alschroeder 11th May 2014, 10:19 AM
A lot of this is derived from Leonard Susskind's THE COSMIC LANDSCAPE. Anyone who knows how Stephen Weinberg feels about the Anthropic Principle (hint: not a fan) knows that Weinberg was trying to disprove any predictive power of the Anthropic Principle.

Instead, after Hoyle, he made the second successful anthropic prediction--that if the Anthropic Principle held, that the tiny amount the cosmological differed from 0 would be vital to intelligent life being able to develop.

Given Weinberg's antipathy towards the Anthropic Principle, that makes this coincidence all the more startling--and the greatest anthropic coincidence so far. Ten to the 120th power? There are at most 10 to the 88th power particles in the observable universe, for comparison's sake.

Explanations range from positive and negative vacuum energy cancelling each other out (but that has a LOT of problems) to a recent suggestion that the universe is cyclic, but the constant is not conserved, so it gets weaker each time. (Which ALSO has a lot of problems.)

If positive and negative vacuum forces cancelled each other exactly, it might be more understandable. But JUST the amount needed for the seeds of irregularities needed to make galaxies form in the early universe..?

(If the constant were negative, attracting rather than repelling, it couldn't exceed one to 10 to the 120th power, otherwise it adds enough to already-attractive gravity that the whole universe would collapse into a Big CRUNCH.)

If it were the full amount calculations suggest, instead of that infinitismal fraction, the constant would tear apart galaxies, stars, planets, us, even atoms.

This is the same level of "luck" as flipping a coin and getting "heads" FOUR HUNDRED TIMES IN A ROW, according to Paul Davies, in THE COSMIC JACKPOT.

Further, according to John Barrow, THE BOOK OF UNIVERSES, this just wasn't ONE lucky shot. There are "a succession of special epochs in the early universe when the different forces of Nature peel off and continue with different strengths." Each time, the constant should be reset to a much higher value, yet somehow return it to the value that, during each of those epochs, it sets it back to this extremely narrow range--a knife's edge is a ludicrous UNDERstatement--despite all the contributions of the differing other forces.

I also find it amusing that Einstein, who called the constant "his greatest mistake"---was right, once again.

Next: Quantization. (Just a quick look at the implications for the developement of intelligent life, not the whole theory,honest.)

man in black 11th May 2014, 9:45 PM
Al where do you find this and if this comes up off of the top of your head, wow
edit delete reply
Al Schreoder (Guest) 12th May 2014, 12:39 AM
I read a lot. And the anthropic coincidences have fascinated me for a long time.
edit delete reply

JKCarrier 12th May 2014, 3:10 PM
I think I missed something. If Einstein thought the universe was static, and we later found out that it's expanding at an ever-accelerating rate, how does that make Einstein "right"?
edit delete reply
Al Schroeder (Guest) 12th May 2014, 6:02 PM
Because he introduced a cosmological constant--a force like gravity, only repulsive...to KEEP the galaxies in place.
He decided it was no longer needed once they found out the galaxies were moving anyway...but it turns out the cosmological constant was still there all along, slowly accelerating the expansion.
edit delete reply

JKCarrier 13th May 2014, 5:03 AM
Hmm. Still sounds to me like he had the wrong end of the stick, but I'll defer to your greater expertise. ;)
edit delete reply
Post a Comment