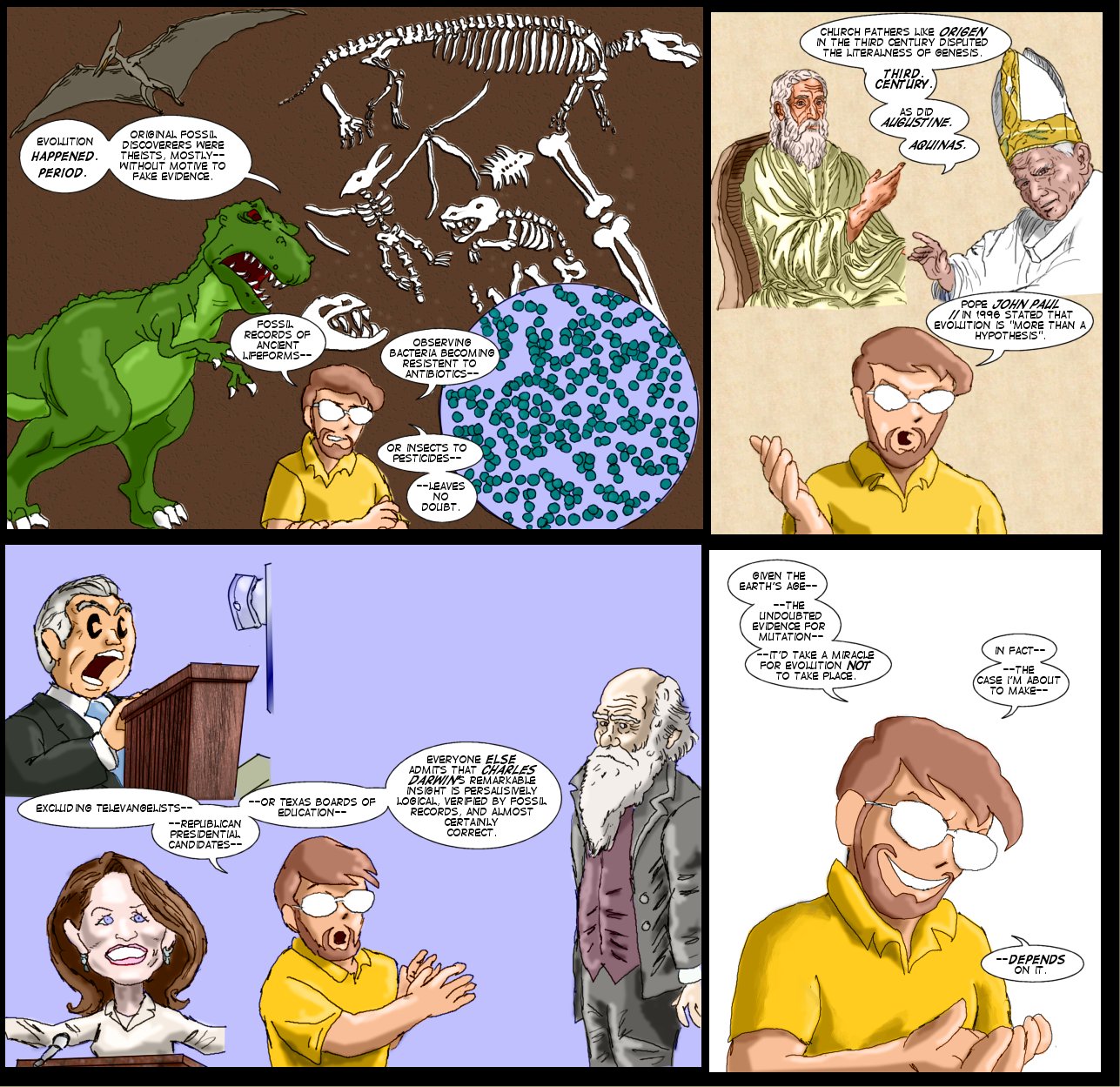 27th Oct 2013, 11:04 AM
Average Rating: 5 (1 vote)
Rate this comic
Author Notes:
alschroeder 27th Oct 2013, 11:04 AM
Actually, it's not true that the Bible teaches God can do everything. According to the Bible--He cannot lie.
For those who follow the Judeo-Christian tradition:
Numbers 23:19. "God is not a man, that he should lie"
Hebrews 6:18. "It was impossible for God to lie"
Titus 1:2. "God, that cannot lie"
So what would ten thousand fossils of beings who never existed in the ground be---but a lie? Like someone planting false evidence, in hopes of deceiving others?
So what is Genesis? To believers, it can be read as a parable, meant to convey spiritual truths, but not meant to be a scientific truth.
Stephen King tells a story, and it's not a lie; it's a story meant to convey a truthful meaning by means of illustration. That's far different from Stephen King planting physical evidence to mislead people into thinking something happened that didn't.
Maybe you think the Creator had nothing better to do than plant red herrings throughout strata of a world that never existed. (Not my analogy; I'm trying to find the original quote.) Most of us realize the absurdity of same.
Or the absurdity of fossil records for humankind being "deleted" from the fossil record for hundreds of millions of year.
edit delete

droidsteel 11th Jan 2015, 5:42 PM
Actually there is one massive peace of evidence to supoort 'long term evolution' (I think what you meant is macro evolution) and that is that you can take a DNA sample from any two organisms and they will share some genetic code.

For instance, humans share about a third of our DNA with trees. What more do you need to prove that both trees and humans are descended from the same organism?
edit delete reply

Yeah, genetic similarity between species is probably the strongest case for evolution. It's not merely that we share so much. It's WHAT we share.

The fusion of our second chromosome is literally something that shouldn't even exist in a creationist worldview, and yet there it is, connecting us to our primate cousins and ancestors. It's pretty much an over-the-fence home run for science.

It's just kind of asinine at this point to draw a line between micro evolution and macro evolution. These aren't things. There's only one kind of evolution.

Actually, if I could offer one teensy criticism, I think panel three is kind of an appeal to popularity. I understand the point is that these "critics" of evolution are out of touch, but it doesn't make a case for anything.
edit delete reply
Post a Comment