COINCIDENCE TEN: A FINE LINE, or THE ALPHA FAIL 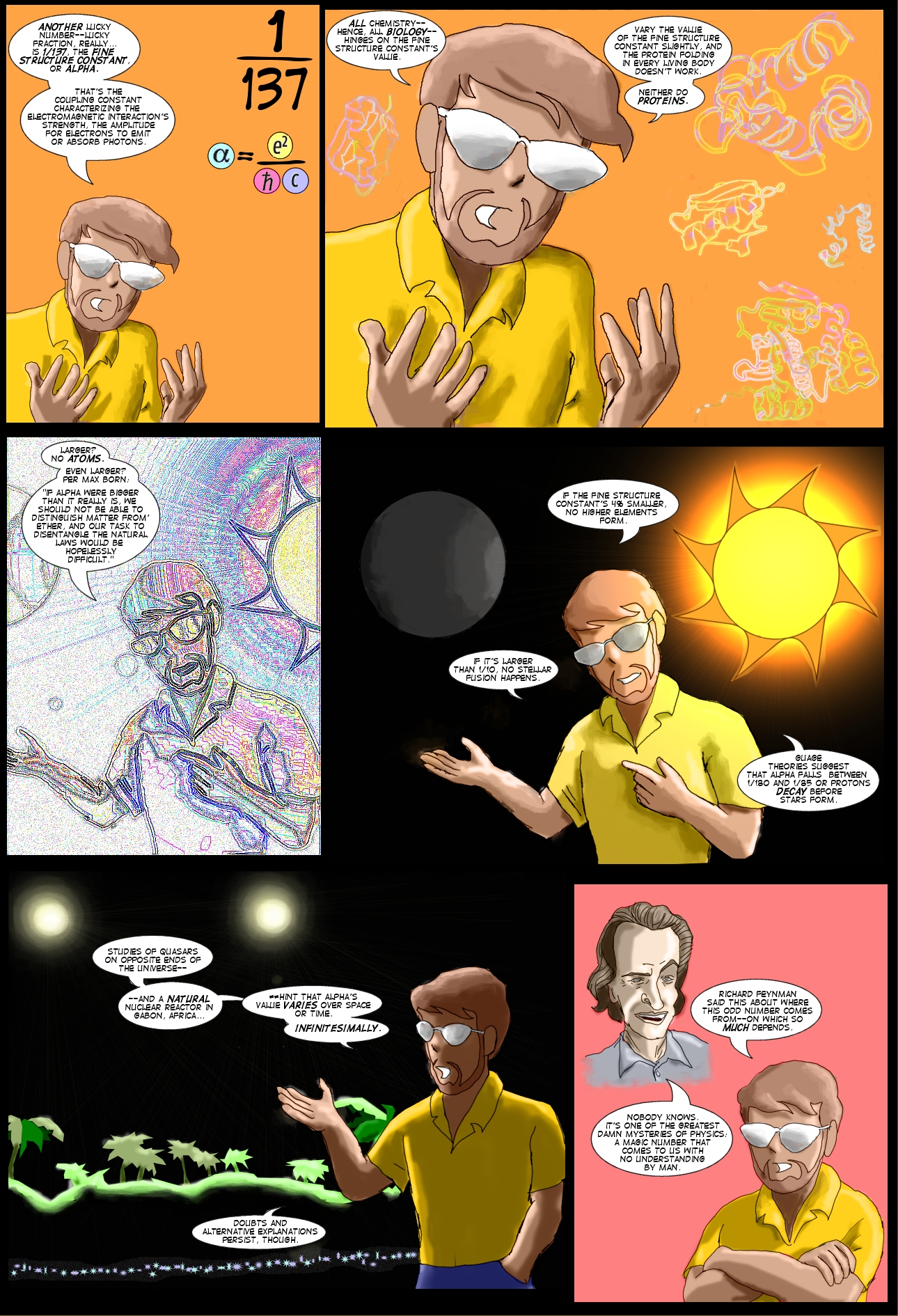 27th Apr 2014, 12:34 PM
Average Rating: 5 (1 vote)
Rate this comic
Author Notes:
alschroeder 27th Apr 2014, 12:34 PM
A good study about the limits of the fine structure constant and the developement of intelligent life can be found here at "Fine-Tuning of Fine-Structure Constant" by Robin Collings. Also check out the sections on Alpha at "Anthropic Reasons for Non-zero Flatness and Lambda".

The fine structure constant controls, among other things, the bonding between atoms and molecules, and hence controls all chemistry...and through that, all biological processes. It's possible if you varied it in EXTREMELY small amounts you might find analogues for the reactions needed to make protein folding, etc. However, considering we think many conditions like Alzheimer's or some cancers are caused by improper or incomplete protein folding, I wouldn't want to bet the farm on it. And of course, since stellar functions also depend on it, one way you wouldn't get stellar fusion at all, and in the other one you would meet our old friend the Beryllium Bottleneck, and get no higher elements at all. There's really not much room for fudging.

Here's a link to "There's a Naturally Occcurring Nuclear Fission Reactor in West Africa" and here's one about the Quasar studies that indicate that the fine structure constant might vary in space at "Variations in fine-structure constant suggest laws of physics not the same everywhere", both of which if true, might have enormous implications and indicate the inflationary version of a multiverse might be true. However, the variations are SO tiny, that many have doubts about the data. See "The Fine Structure Constant is Probably Constant" or "Why I'm Skeptical About the Changing Fine-Structure Constant".

Alpha/the fine structure constant is really a ratio between some other figures---the speed of light, the elementary charge and the Planck constant--so even if it does vary, we'd have to figure out which of those is doing the varying.

Still, if true, that's the first "constant" we've seen that isn't truly constant, and it's certainly worth studying further.

Maybe two more coincidences, I think (although obviously I could list quite a few more) having to do with the expansion of the universe and the cosmological constant,and perhaps another about quantization, and then we'll get into the implications of all this, and the possible explanations--the meat of "A Reasonable Case". But I had to make sure you were up to speed on all this first, otherwise the follow up wouldn't make as much sense.