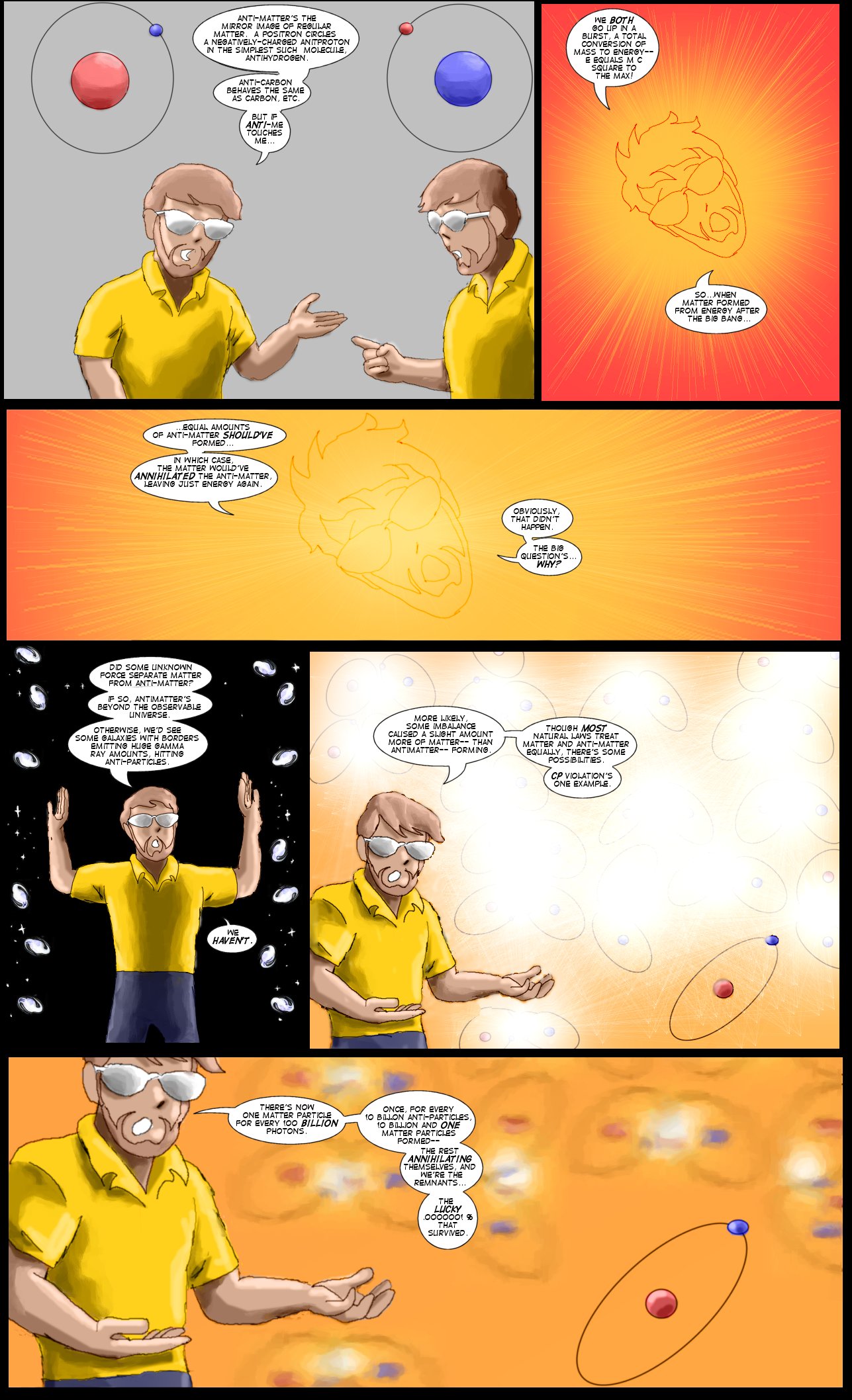 
And of course no one is doubting that there is a good scientific explanation of why there is more matter than antimatter in the universe.

But...it seems awfully lucky it falls out that way, doesn't it?

Next time, another objection: this time from the resourceful mind of Douglas Adams.

However, next time may NOT be next Sunday. I suffered an accident a week ago Friday, and need to have some major oral surgery tomorrow. So, it depends on how spacey the pain meds make me. We'll see. I may have to skip a week.

User comments:
tom (Guest) 6th Apr 2014, 8:41 PM
As you say, no one doubts there is a good scientific explanation for why there is more matter than anti-matter. But then, that just means the .0000001% arn't lucky, they're merely the result of an explainable process. I don't know that this point is a suitable fit with your other premises.
You're right when you say that it seems awfully lucky, but there's the rub. If I judge a one part in ten billion occurance outside of it's context, (i.e., the phenomonon has an explaination), and call it a coincidence because my real world experience hasn't prepared me to be comfortable with vanishingly small percentages, I'd be evaluating the result subjectively, not objectively.
The result is what it is, no matter how I feel about it's likelyhood. Einstein wasn't comfortable with spooky actions at a distance. Quantum entanglement experiments have been performed. It happens. Get over it, Albert.
I'm enjoying this series and can't wait to see how it plays out.
Will you be incorporating the BICEP2 results later on? I'd like to see your view of how it's implications bear on the weak anthropic principle.
edit delete reply
Miyto (Guest) 7th Apr 2014, 4:45 PM
@tom A few pages ago I had a similar qualm. But, the premise pages of this comic did say he would start with 'lucky' 'coincidences' and that these pages would be considered insufficient evidence by themselves to be considered proof.
So I decided to wait a while until the first set of coincidences come full circle and are connected with a 'proof' before I start deconstructing either evidences or proof.
That said, I do want this comic to give a logical argument for this being a created universe.
I would *love* to shut up the 'science is anti-religion' types with something concrete.
edit delete reply
tom (Guest) 7th Apr 2014, 7:42 PM
@Miyto But is that where he's giong with this? I don't think he's said so, and I didn't want to jump to any unwarranted conclusions before he'd fully laid out his groundwork.

I can understand your point that all of his premises shouldn't be expected to contribute equally; some would be stronger, some would be weaker. I'll just go with seeing this one as the runt of the litter, and wait for future developments.

I also had an experience as you on an earlier page, where I was bothered by something but decided to wait and see.

I thought he gave too quick a dismissal of the weak anthropic principle.

He says it's an observation, not an explanation. The analogy he gives is that it's like answering the question "why does the sun shine?" by saying "because otherwise we'd all freeze to death."

To me, his analogy is not even an observation, it's more of a nonsequitor.

If I were to substitute an analogy for the WEP, I think I'd go with something like:

Question: "I am in the middle of the Atlantic Ocean, yet I am still alive. How can this be?" (This would naturally puzzle me because I'm aware that I swim like an anchor).

Response: "Oh, I'm on an island!" (Or to complete the phrasing of his analogy "otherwise I'd drown to death.")

I'd say an observation can BE an explanation, as long as the context isn't stripped away.

That's why I'm interested in his take on the implicatiins of the BICEP2 results. And why I'd like to see where this leads.

P.S. to Al. Hope everything went well with the oral surgery. That stuff is no fun at all. On the plus side, modern medicine can do amazing things.

edit delete reply
Al Schroeder (Guest) 8th Apr 2014, 1:05 AM
Oh,YEAH, the BICEP2 results will be included when we talk about the multiverses...i.e., the various "levels" of them. And BOY, isn't this a great time to live, with confirmation of what we've long suspected, but up till now not been able to prove!

And Tom and Miyto: I really appreciate your patience, and your enjoyment of what's gone on so far.

I think I'll be able to post a new one this Sunday. Not absolutely promising it, but it looks promising.
edit delete reply
Al Schroeder (Guest) 10th Apr 2014, 9:03 PM
Well, it DID look promising. The oral surgery was no big deal (really!) but computer problems cropped up, and we're getting a NEW system, and it'll take a few days to get here. So it may really be TWO weeks before I post again---you know how optimizing a new system (especially one with graphic software) can be.
edit delete reply
Post a Comment