COINCIDENCE EIGHT: Neutron-Proton Mass Difference, or Sometimes it doesn't pay to be Neutral 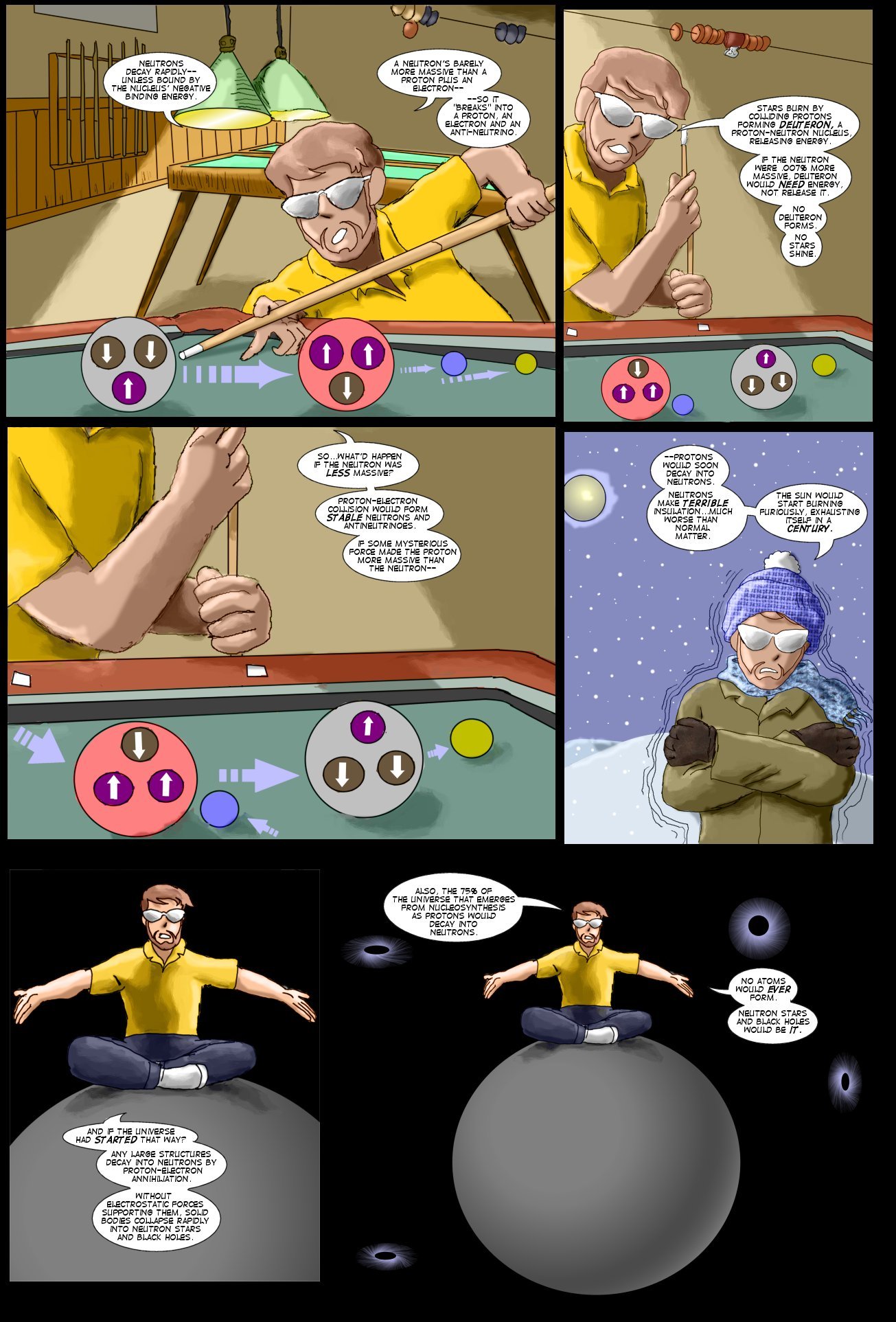 30th Mar 2014, 3:05 PM
Rate this comic
Author Notes:
alschroeder 30th Mar 2014, 3:05 PM
Sources: George Greenstein's THE SYMBIOTIC UNIVERSE and Barrow and Tipler's THE COSMIC ANTHROPIC PRINCIPLE (Chapter 6.6). Here's a good on-line reference on why neutrons decay in fifteen minutes on their own but stay stable in nuclei at Neutron Stability in Atomic Nuclei.

I based the last two panels on Barrow and Tipler's work, but it's worth nothing there is at least one dispute on that. In The Evidence for Fine-Tuning , Robin Collins argues that even if the neutron were less massive, there might be a path for two neutrons to covert into a deuteron (a proton and a neutron) and an electron.

"Since these sorts of conversions appear to be allowed, the only effects we can immediately deduce that a moderate decrease of the neutron mass would have are that stars would burn very differently and that stable nuclei, including hydrogen, would shift towards having a higher proportion of neutrons than we presently find. I know of no current well-developed argument, however, that these effects would inhibit the existence of intelligent life. This is an area that needs further exploration."

A good theoretical model of what the universe would be like in such an instance is lacking. And it would require that such a mass differential to be a very moderate one--i.e., within prescribed limits.

NEXT: ANTIMATTER ANGST AND ANOMALIES

User comments:
Christopher (Guest) 3rd Apr 2014, 9:56 PM
I recent wrote a short summary about stars for a Rolepalying forum. An interesting idea I stumbeled upon: Technically everything that is heavy enough to form a star, is heavy enough to diretly colapse into a White Dwarf, Neutron Star or Black Hole. Most heavier Gas Giants (in the Brown Dwarf ranges) are keept from colapsing by the same process that keeps White Dwarfs from collapsing furhter - electron degenracy pressure.

Star are burning, desperately (and hoplessly) trying to prevent the collapse. The Fusion reaction is the indeed the only thing preventing a univers of nothing but black holes, neutron stars and black dwarves.
All those star corpses out there are simply stars that ran out of stuff to burn to prevent thier final fate. If they could, they would still shine.
edit delete reply
Post a Comment