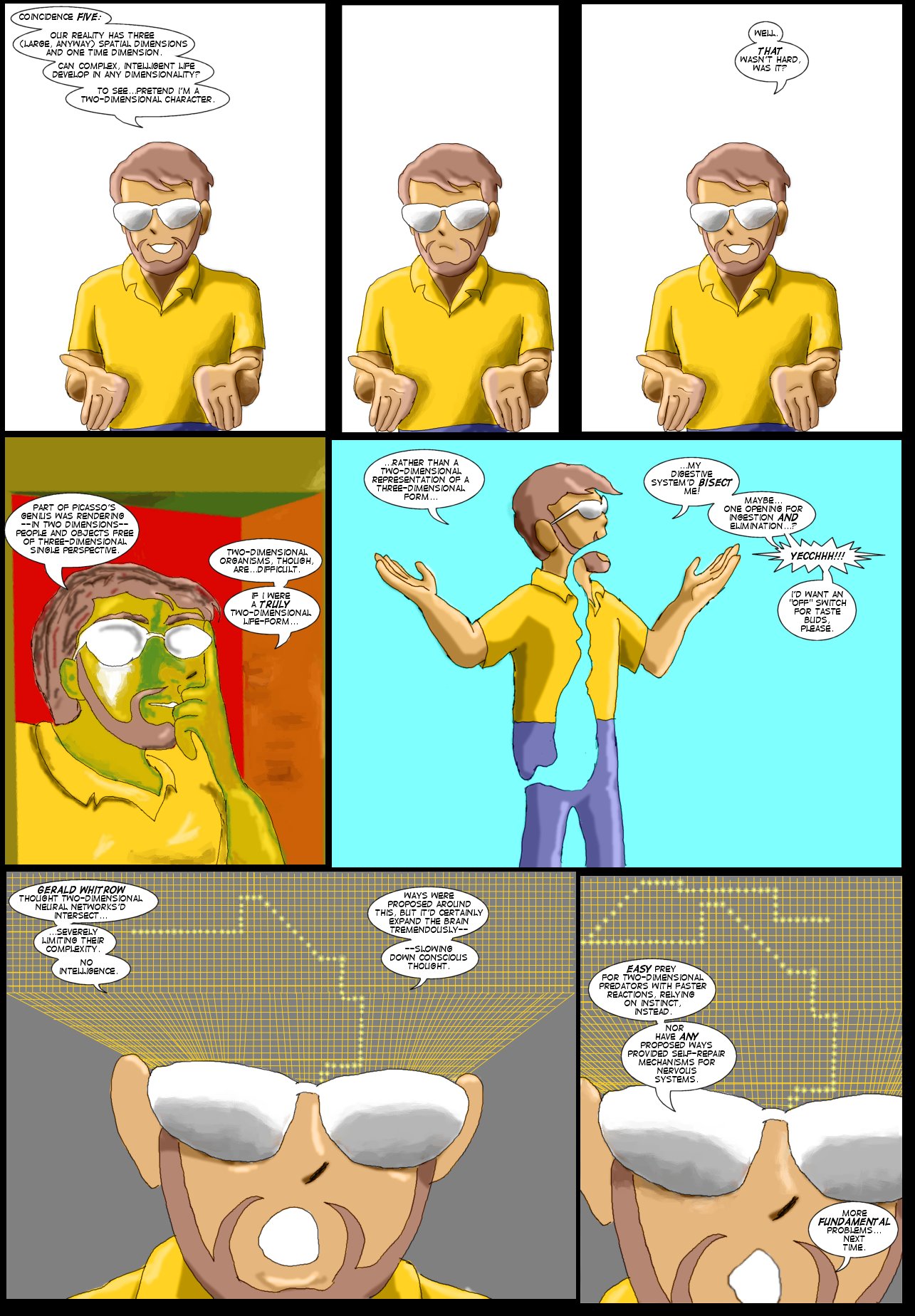 
The reason I put (large) when talking about the three dimensions is because there are some current theories that say there may be other, albeit smaller dimensions present in our reality. We'll get to those much, much later, when we discuss string theory, branes, and the bulk.

The "bisecting" thing for two-dimensional organisms is often mentioned, and makes a good graphic. But there are several ways around that---a single opening for both
functions (eeewwwwww!), osmosis through membranes, etc.

Gerald Whitlow in 1955 argued that information-processing systems--neural networks--would be so extremely limited by the intersections of a two-dimensional reality as to be unworkable. A.K. Dewdney in his PLANIVERSE argued that neural networks could be constructed along the McCullough-Pitts model. However, Barrow and Tipler in THE ANTHROPIC COSMOLOGICAL PRINCIPLE said such "seems too dramatic a simplification to provide the basis for a real nervous system since one would like it to have the capacity to repair itself in cases of occasional malfunction."

Also, to have anywhere near human-level sentiency, in two dimensions, the "brain"--unfolded, like a map--would be so unbelievably huge that there would be speed issues, mobility issues, and problems with simple-minded, instinctive predators.

So much for Abbott's FLATLAND, which still remains a delightful...fantasy.

But there are deeper issues involved; with ANY other dimensionality instead of three spatial dimensions and one time dimension.

Am I saying that intelligent life can ONLY exist in our sort of 3-D dimensionality?

That our sort of dimensionality is UNIQUELY suited for sentiency?

User comments:
jamoecw 4th Aug 2014, 9:31 AM
even in 3 dimensions instinct is far faster than conscience thought.

another possibility for a digestive system is one that sticks and unsticks to itself, closing up to squeeze an object through the digestive cavity, and opening up to allow passage of the object. this would result in two halves of an organism that would never fully let go of the other half. once connected to itself it might reopen valves to allow passage of stuff from one side to the other (fluids if you will).
edit delete reply
Post a Comment