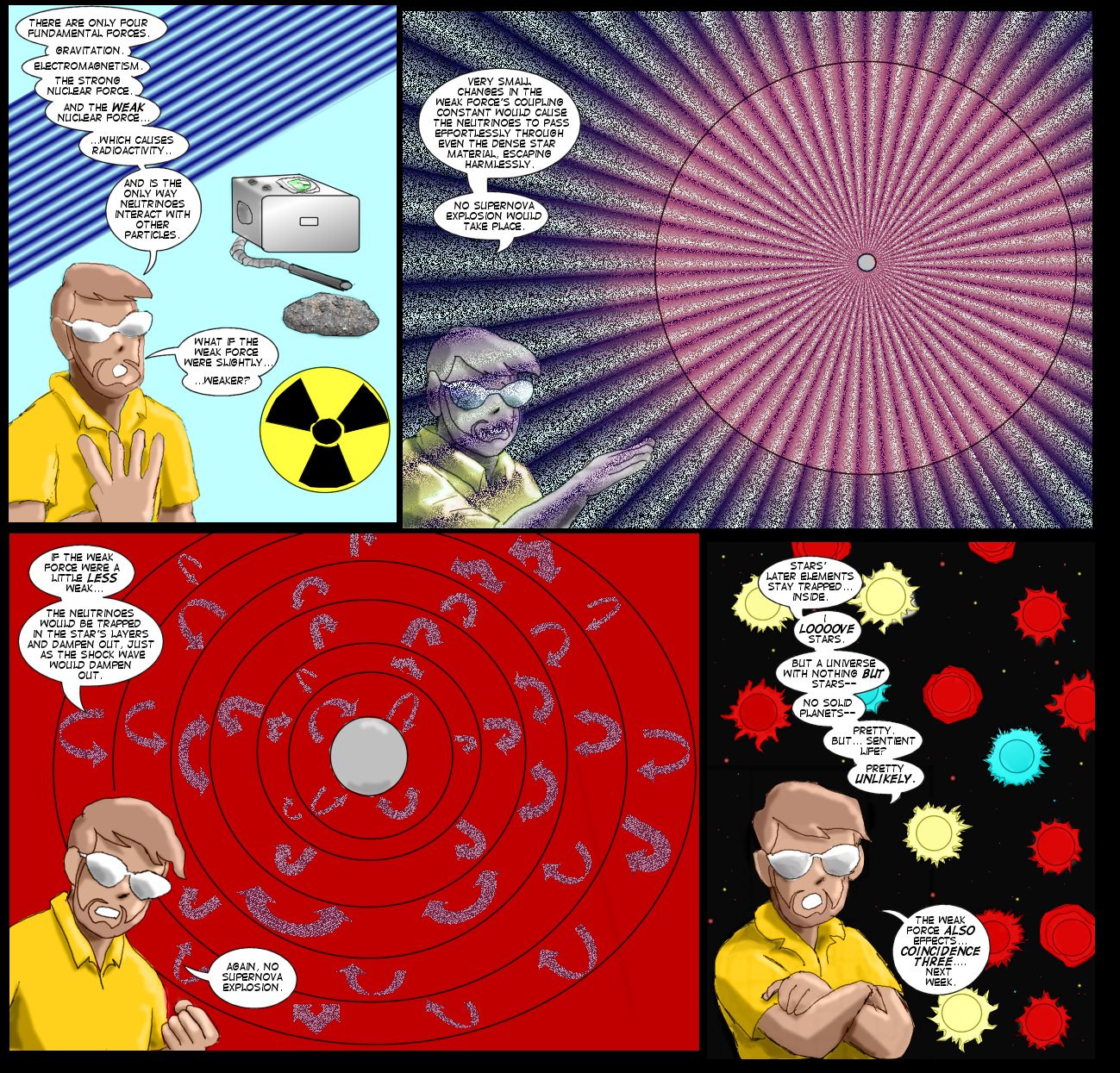 12th Jan 2014, 1:49 PM
Average Rating: 5 (2 votes)
Rate this comic
Author Notes:
alschroeder 12th Jan 2014, 1:49 PM
This is talking about the Type II supernovae. Type I supernova, which undergo a different process, would still work. But those are much smaller stars--with much less to "spread"--and in our type of galaxy are much less frequent. It's fair to say if we only had Type I supernovae, the interstellar medium would be much LESS enriched by higher elements than hydrogen and helium, and rocky planets and lifeforms that depend on higher elements (like us) would be far less likely to occur. But the possibility isn't zero.

A lot of scienitsts doubted the neutrino theory in supernova production, because the values would have to be so exact. Fortunately, a supernova detected in 1987 confirmed the theory. You can see references to it here and here.

If sentient life--or ANY life--can be formed JUST from hydrogen and helium (say, in stars themselves) than my argument falls flat. But I doubt anyone thinks there is a strong case for that,anyway.

Next week, we'll go into Coincidence Three--which is almost Coincidence Two-and-a-Half--because it also involves the weak force, but at a different epoch of the cosmos...and ties directly with my comment that my argument depends on evolution.

After that, I may discuss recent speculations about a "weakless" universe and what refutes them.

User comments:
Christopher (Guest) 13th Jan 2014, 3:47 PM
I think what you are getting at so far is this: "The biggest coincidence is not all those Elements Forming. It's that the laws/constants of our Universe are set *right* for those elements to form. The laws/constants of our universe are what makes life possible. Any minor change to those constants/laws would result in a lifeless universe."

What I heard so far the usual answer to that was: There is indeed a Multiverse*. Each Universe has slightly different laws of nature (with the values of the Constants being what 'defines' a Universe). That we (sentient life forms) exist in a Universe where the laws are 'right' for sentient life should not be odd. If they weren't right after all, we would not be here to wonder about it. Like we *aren't* there to wonder in all the Paralell Universes with the wrong constants.

I am intrigued to see what your answer will be, but am willing to wait till you complete your explanation for the others.

*Most Multiverse System in Fiction are based on Quantum Differences (how certain decisions made by people turned out), not differences in the laws of nature.
Some take a mixed approach (a few Universes have different laws, maybe even so much long term survival is impossible for 'Outsiders'. But each still has the right laws for a form of life).
edit delete reply

dougwarner59 15th Jan 2014, 3:28 PM
Are you using a "what if" question to help explain your case? That would make me think that you are trying to say that anything is possible; Of course, that would also include the possibility of a universe devoid of a God. Or is it what Christopher said about Multiverses...Multiverses would explain why something implausible could happen in one of those universe while not happening in the others.
edit delete reply
jamoecw 15th Jan 2014, 10:47 PM
good stuff, though i can come with different explanations for why things happen the way they do. given that what we know about how particles work comes from indirect observation (you can't exactly see a proton), which is then backed up via theories to get the picture of what is happening, that means that we don't actually know what is happening exactly. take the big bang vs. steady state theory, steady state basically said that helium and hydrogen have always existed, and that there is a process which forms the higher elements, while the big bang theory says that it started at some point as a super particle. we have no evidence of a super particle, instead we have a motion of the galaxies around us that indicates expansion, and we assume that is from a super particle different than what gets formed elsewhere in our universe. if it does get formed elsewhere in our universe, but happens to be incredibly rare, and then the resulting explosion causes the environment we see around us, then it means that steady state theory is more likely than the big bang theory (modified of course, just as the big bang theory has had to be modified). in fact a multiverse theory is essentially a modified steady state theory, unless the multiverse was created by a single super particle, and there can't be another one due to needing everything in the universe to create one. thus a different explanation of the first point made that could work means that one can't say for certain that the big bang did happen, even though at this point in time it seems quite likely. god being a all powerful force, that is also all knowing, may decide to trick us, and thus we can't really disprove such an event, therefore scientifically one cannot disprove the existence of god. so in order to prove the existence of god you would have to disprove the flying spaghetti monster, which is again impossible to disprove, thus the only scientific answer to is there a god is 'maybe', though you can weight that maybe in a direction. same goes for the big bang theory, evolution, etc. which is pretty much why people who think those people are nuts, are by logical extension thinking that most founders of our current scientific understanding of the universe were nuts as well.
edit delete reply
alschroeder 19th Jan 2014, 12:59 PM
I will indeed address the multiverse explanation of the coincidences I'll be racking up. In fact, I'll address that as one of five possible answers. But I want to impress on the casual reader what the coincidences are before I get there.
edit delete reply
Post a Comment