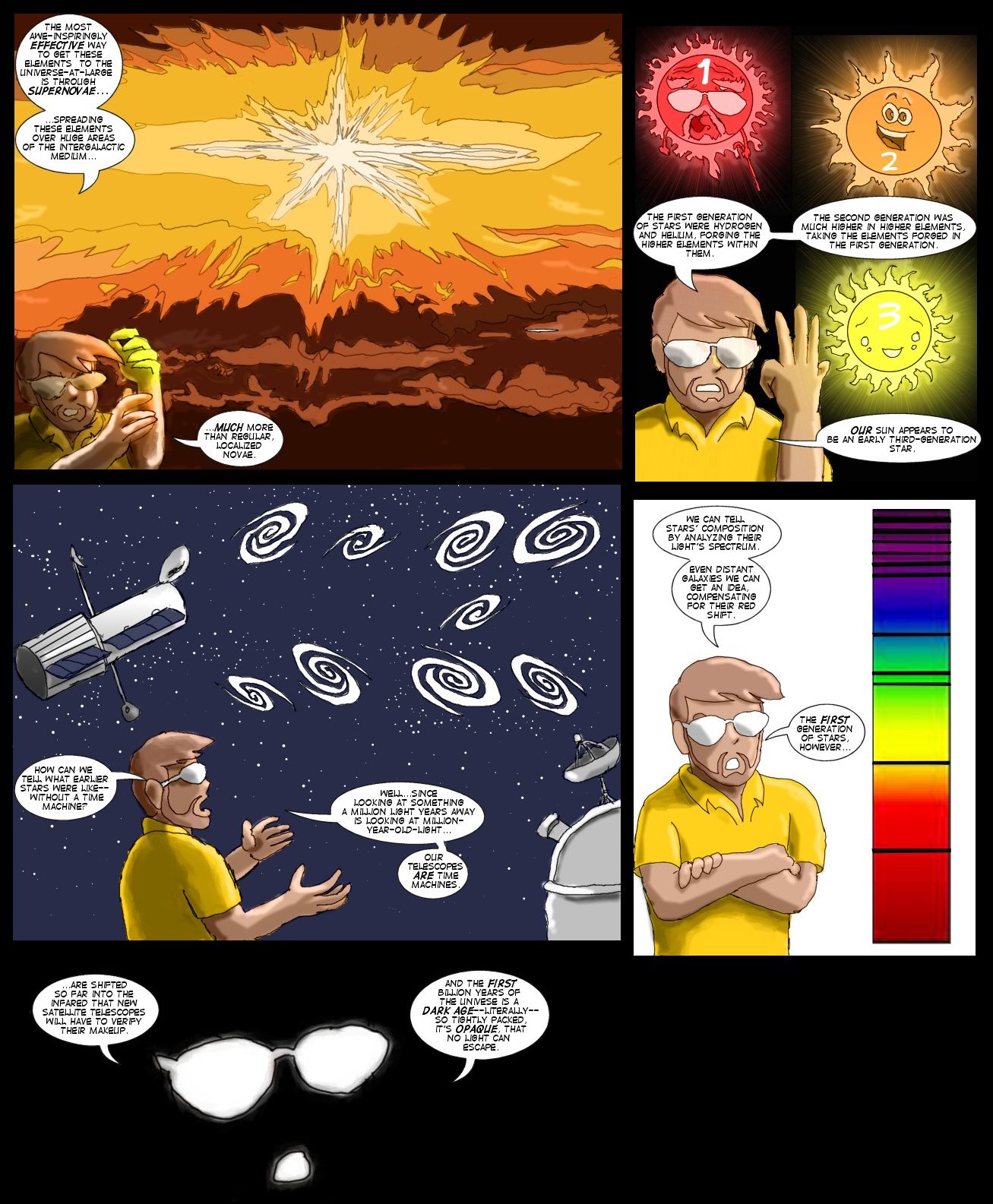 22nd Dec 2013, 1:43 PM
Average Rating: 5 (1 vote)
Rate this comic
Author Notes:
alschroeder 22nd Dec 2013, 1:43 PM
I don't want to give the impression that we aren't pretty sure the first generation of stars were just hydrogen and helium. As shown here, primordial clouds have been found that are just hydrogen and helium, no higher elements. (It also discusses in detail the difficulty of trying to catch glimpses of that earliest generation of stars.) We'll probably see a lot more when the next generation of infrared space telescopes are launched around 2018.

The universe starts to become less opaque relatively early, about when it's 380,000 years old, but doesn't get to less than 10% opaque till it's about a billion years old. So it's a gradual thing.

The important thing is that supernovas are essentially to spreading the elements that are "cooked" in stars out to the rest of the universe.

dougwarner59 22nd Dec 2013, 4:05 PM
Sure a lot of what you are saying may sound great if you base your findings purely on creating something from something, but what if it were possible to create something from nothing without the need of a God...

Steven Hawking said, “Because of the law of gravity the universe can and will create itself from nothing.”
edit delete reply
alschroeder 29th Dec 2013, 2:12 PM
We'll get to gravity; and string theory, which Hawking is basing his statement in the GRAND DESIGN on.

Hawking's a brilliant man, but many of his peers are not quite as sanguine about string theory as he is.

And string theory's ensemble-explanation for many of the coincidences explored here, for reasons I will eventually get into, is lacking in many respects.

Again, this will take a little time to get this all out here.
edit delete reply

dougwarner59 12th Jan 2014, 3:10 PM
There are something's I too disagreed with Hawking, such as when he was taking about when the expanding universe eventually started to reverse directions and collapse; time would go also backwards; He then said you would be seeing everything in reverse. This made no sense to me, because your brain would also be going in reverse so you wouldn't see anything differently than before; being said that could mean the universe is collapsing right now, but from our perspective it appears to be expanding.