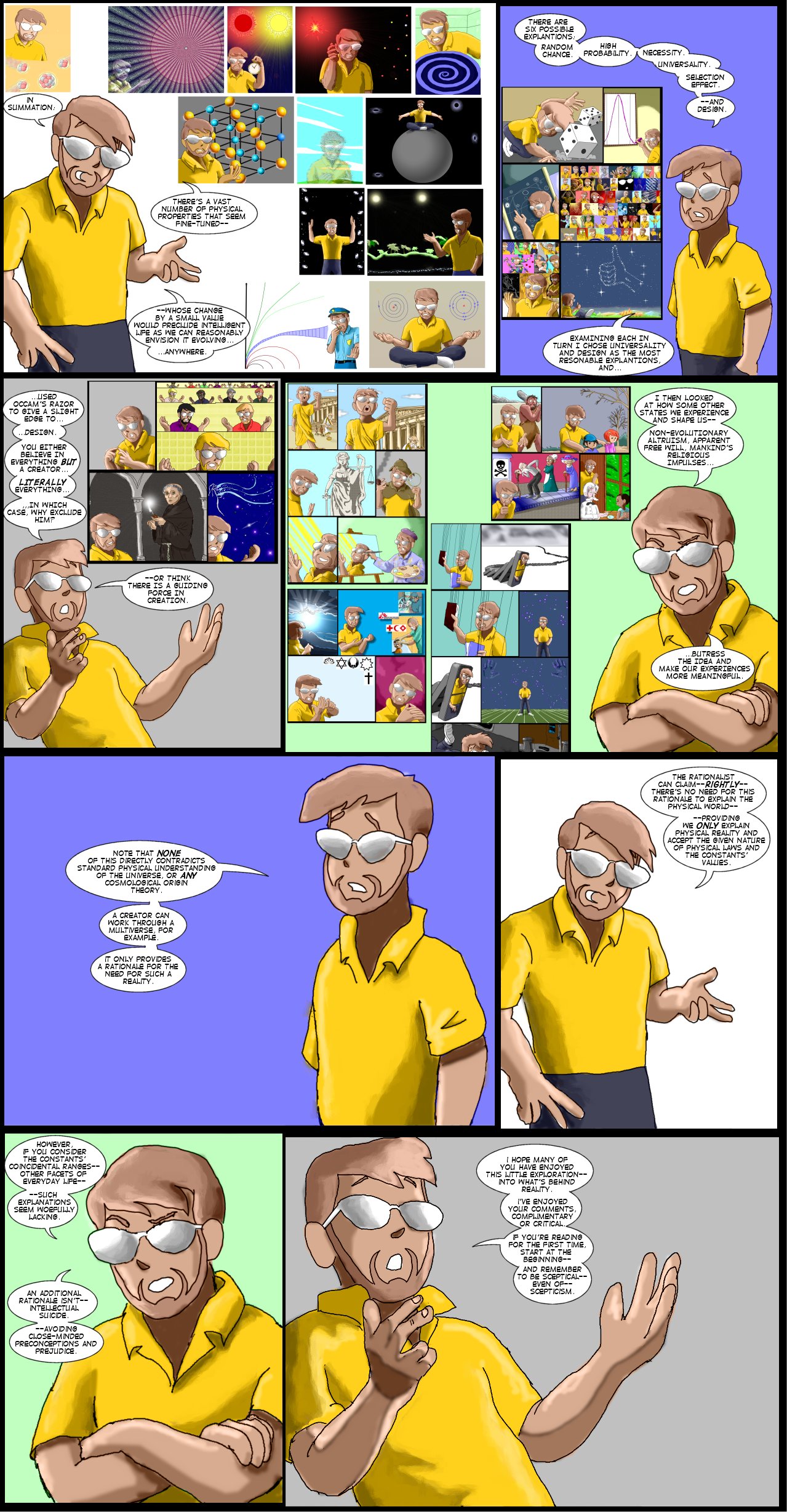 15th Mar 2015, 6:11 PM
Average Rating: 5 (2 votes)
Rate this comic
Author Notes:
alschroeder 15th Mar 2015, 6:11 PM
Continuing a look at the origin of reality...largely inspired and derived from George F.R. Ellis' brilliant brief book, BEFORE THE BEGINNING. He is NOT responsible, though, for the liberties I've taken with his logic or how I've chosen to illustrate it.


Well. I have to be careful not to overstay my welcome, and that's what I wanted to say. DO check out the aforementioned book written by an eminent cosmologist who has cowritten with Hawking--one of the most brilliant I've ever encountered, and as you may have noticed--I read a LOT.

I appreciate all of you reading. In the wake of 9-11, the Charlie Haddo murders, beheadings in the name of an Islamic State, the pedophile scandal in the Catholic Church, it's easy to think that all religion is wrongheaded, and I can scarcely fault thinkers like Richard Dawkins or the late, lamented Christopher Hitchens in drawing that conclusion.

But as you can see--for me, at least, such a conclusion would be intellectually dishonest.

I thought about doing one more strip of misconceptions aimed by religion's critics at believers, but I didn't want to end it on such a note. I WILL note one or two misconceptions here through.

Believers turn to religion out of fear of death. Such an idea speaks very poorly of people's knowledge about religion. Jesus Himself debated with the Sadduccees--the "higher class" religious belief among the Jews of his day, often including the High Priest--who did NOT believe in an afterlife, yet were devoutly religious. The Pharisees were a little more middle-class.

Besides, most ancient religions had absolutely dismal afterlifes--certainly not worth hoping to gain. Homer had the ghost of Achilles say he would rather be a living slave than king among ghosts, reflecting the hopelessness of the afterworld the Greeks believed in--yet they were very religious. The early Jews had a similar belief, a dismal afterlife in Sheol--yet they were devoutly religious. No, sceptics must look elsewhere to "explain" the religious impulse.

I used to have an imaginary friend, but I outgrew him. Not so the religious. The obvious counter is that if you instead believe in a multiverse, full of unobserved and theoretically unobservable alternate universes to explain the anthropic coincidences in our own...then the choice is between one possibly "imaginary" Friend--as opposed to trillions of (possibly)"imaginary" lands, trillions of Narnias, Ozes, and Wonderlands--all similarly unevidenced---to explain the world we see.

I hate to rate degrees of irrationality, but of the two, I think sticking with the Friend might be less irrational.

Your mileage may vary.

This is not to insult the honest sceptic. I just want to make sure they've considered every aspect of what they may be rejecting--and hope to give them food for thought.

I obviously have my own ideas about religion, but I'd rather make a general case for Design here, since many of my conclusions on a specific religion has to do with historical records as well as logic, and others have done so much better than I.

I've enjoyed all your comments and criticisms, and hope you will recommend this strip to anyone with intellectual curiosity and who might be searching for the truth, either spiritually or scientically.

Anyone wishing to can write me at alschroeder3@comcast.net.

Thanks again for your reading.

personally I think any conclusion is impossible since the information we really need is beyond our senses, instrumentation and comprehension... but it was an absorbing, and thoughtful read
edit delete reply
Miyto (Guest) 15th Mar 2015, 9:27 PM
This has been an enjoyable read, one I may recommend to friends whom are in the middle of questioning both their faith and reality. I had a feeling it would be a read that could help people understand what they were questioning and separate people from faith enough that one bad church wouldn't prevent a person from ever looking to religion for strength again. One person is not a people; one church is not christianity. However much easier it is to avoid harm for overcategorizing, one loses too many possibilities for doing so.
I think I will mention that this comic is complete and should be read to a few friends whom could use the perspective.
edit delete reply

JKCarrier 17th Mar 2015, 5:53 AM
Bravo, Al! I think this is your strongest work yet, in both writing and art. Have you considered collecting this in book form? At least an e-book. I think it has a lot of potential to appeal to an audience outside the usual gang of comics readers.
edit delete reply
Al Schroeder (Guest) 20th Mar 2015, 1:42 AM
Maybe. Although I'd rather they read Ellis' BEFORE THE BEGINNING.
edit delete reply

The Chessmaster 2nd Dec 2015, 12:56 AM
Just found this again, and I wanted to say that this is some really great work. There a few things I disagree with (for example, the altruism argument), but overall, there are a lot of good points in here. A reasonable case indeed.

Personally, I've always felt that one of the important things in science is not closing your mind to that not disproven. Sadly, a lot of people on either side of this debate assume they know the fundamental nature of reality, that their god is correct or that there isn't one at all. It's puzzling, but I guess that's human nature.
edit delete reply
Post a Comment